There always has to be muscle on a team, and Bulkhead has that covered to the tee. Unfortunately, muscle usually also means slow wit. While certainly not the dullest apple in the barrel, he is certainly clumsy. This review looks at the brawn of the Autobot team, Bulkhead.

"I kinda broke this thing. And those things. And that pile of stuff over there. Sorry."

If there's one thing Bulkhead is really good at, it's smashing stuff. It's his specialty. In fact, he's so good at it that he's even good at it when he doesn't mean to be. In a fight, you can count on him to smash the Decepticons, nearby parked cars, other Autobots, low floating billboards, and occasionally himself. The irony of it is that he's a natural builder who loves to make things. He'd much rather be creating something, but when you're as big and strong as he is, stuff just sort of seems to get smashed.


Really amazingly strong, but not very agile.
Talented painter and sculptor
Can throw or launch smaller Autobots up to a mile 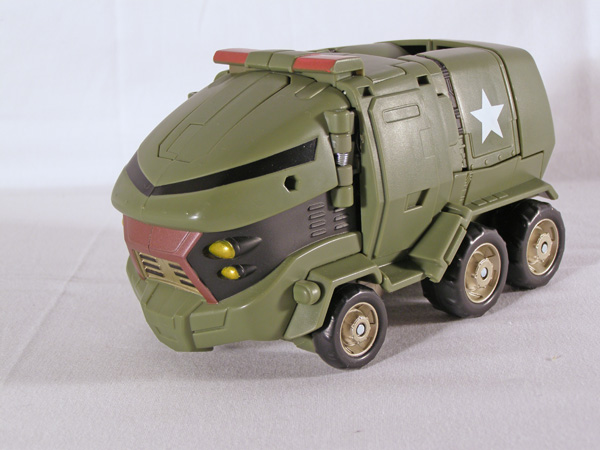 For his alt mode, Bulkhead guises himself as a S.W.A.T. armored transport. By the color scheme, you'd almost think it was an army transport. It is mostly army green, with black on the front fenders and on spots towards the rear. He also features a painted red lightbar on the roof. The sides are flanked with a five pointed star, another suspicion that this might be something the military had. 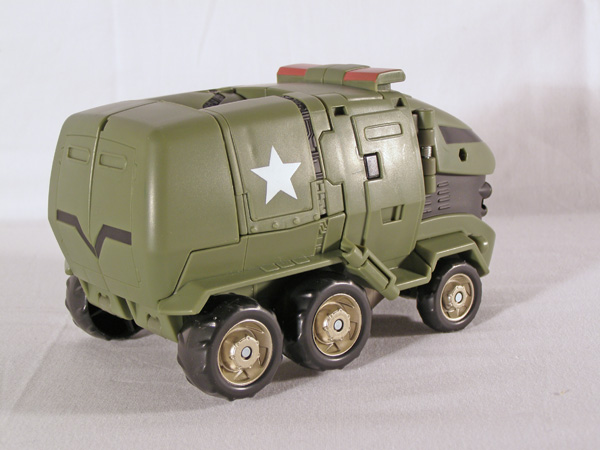 The detail is done fairly well here. The main detractor is the exposed spring and hinge assembly behind the front end. However, it blends in well enough with the sides to not be a major eyesore. Also, the roof is concave a bit due to his arm assemblies. On the lighter side, all 6 wheels are rollers. Overall, decently balanced out.

Bulkhead is interesting to get into robot mode. First, fold down the rear hatch to expose the rest of his arm assembly. The next part is perhaps the most difficult, as the pin that holds the roof together is well pinned. Split the pins apart at the light bar and they will sing down to the rear wheels. You can then fold the lightbar against it. If you grab the lightbar up front towards the center and lift up, this is accomplished easier. After you get the panels apart, you can fold the lightbars into the panel. Next, unclip his arms from the rear and they will spring around to the front. Use the pin on the shoulders to secure the arms to the body.

At this point, pull down on his front fenders to form his legs. The front wheels fold back and under his feet. Push the front end up and back to lock it in place. As you do this, his head will flip out. Flip the rear end up and secure it to his back. Lastly, pull the 2 rear doors apart, then bend them back slightly on the very rearward hinges. You can then fold the doors to drape over his shoulders. He's now in robot mode! 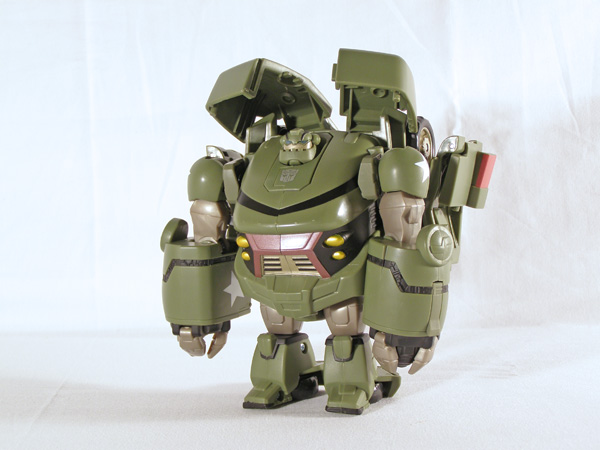 Whenever I see Bulkhead in robot mode, I get visions of Cybertron Crumplezone. Maybe because of the muscle jock profile, with the small legs, barrel chest and lumbering arms. Perhaps, though, it's the head sculpt, with the mouthplate resembling a serrated grate. There's no light piping for the eyes either, they're painted on blue. When compared to some of the other Voyagers (and even some Deluxes), he looks much bigger on TV. 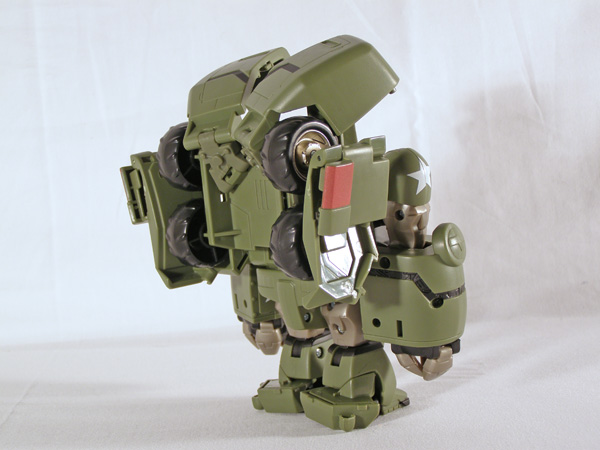 Bulkhead's mace ball, or wrecking ball, works on the left hand. You can see a ball in his right hand, but it's just for show. To activate it, spread his three claw-like fingers apart. You'll see a small lever near his wrist. Pull it back and the ball will softly launch out. It is attached by about 4 inches of nylon rope. You just loop the rope back inside his hand and clip the ball in place to reset the feature. Interesting enough, he also has an uppercut feature. There is a lever on his upper right arm. If you lay the arm out with the star facing up and pull the lever, he'll spring his forearm up. Seems to me this lever would serve another purpose, but no clue what. 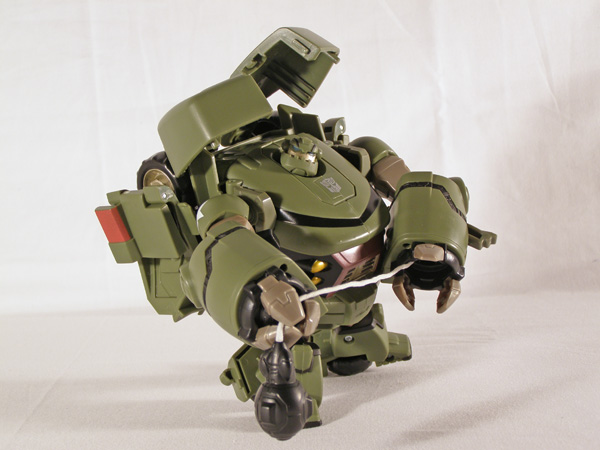 : For the big guy, he sure is small. Smallish legs hurt posing Overall -

: In this case, size DOES matter. Might be best off waiting for the Leader class figure to be scale accurate. This should have been a Leader class at the very least.
Size Class: Voyager
MSRP: $20