It's not very often that a figure is presented to us that is cast in the character's Cybertronian days. The closest we've come to that is the short lived Titanium 6" line. However, Animated is giving us a look at 2 Cybertron modes that we can actually add to our collection. This review is for Megatron's Cybertron form.

"The Allspark will be mine, and Cybertron will tremble at my feet."

Back on Cybertron, when it is late at night, and very dark, robots tell each other stories of the war. They spin stories about the deeds of Megatron, and though robots don't feel cold, the listeners shiver. The only ones who don't enjoy a scary Megatron story are the old ones, the ones who were there. Those old Autobots remember the real Megatron. Many of them bear scars sustained in the heat of his fusion cannon, or dents delivered by his powerful swords. To those old robots, Megatron is no monster, he is a warrior so vicious and terrible that monsters pale in comparison.


No known weaknesses
Scientific, strategic and engineering genius
Fusion cannon can disintergrate up to 40 feet of solid steel. 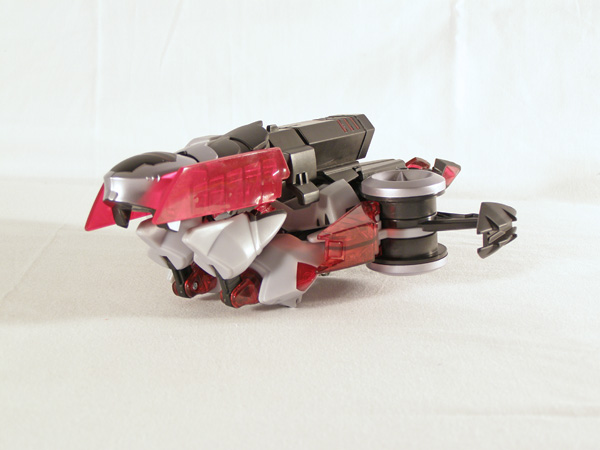 On Cybertron, Megatron transformed into a fusion fighter. At least that's what teh box says. It's a very interesting VTOL design. The craft is a mixture of light gray and black, with red accents in various spots. The fusion cannon is rear mounted, and can fire a missile projectile. What looks to be turbines are molded into either side with winglets protruding out. 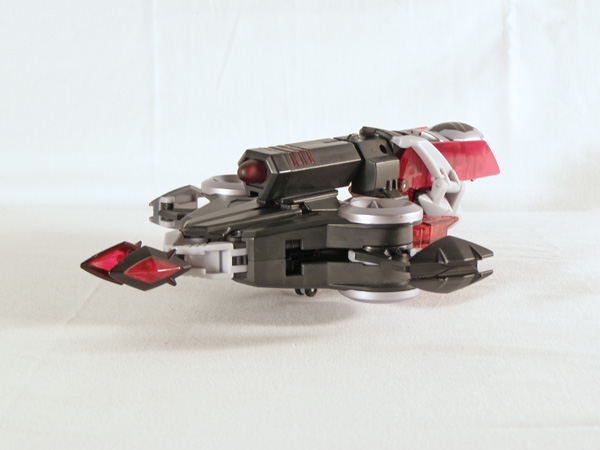 There are landing wheels, 2 on the front and one in the rear, but only the rear wheel can retract. Overall, it's a very creative alt mode but it just doesn't look right. The fusion cannon is latched to the top with a hinge on it's right side, which cuts into the look a bit. Also, you can't really say that robot parts stick out in the open but you also can't claim that it's a seamless ship. There are gaps where they really shouldn't be. Overall, a mixed result.

Transforming Megatron is a little involved. First, pull his tail assembly apart and away from each other. Pull each leg off their pegs and move away and forward a bit. Twist the calves back and fold the winglets into the calves. After straightening out the knees, fold the tails into the knees to form his knee guards. Close up his legs, then push the red piece forward to form his feet. Don't forget to take the silver piece and fold it back for leg support.

Pull the arms apart from each other at the front end. You can then pull the chest down and forward. It will clip on 2 red clips. Fold the forearms out, twist the shoulders towards the back 90 degrees and fold the arms down. If you get a gap in the chestplate, try pulling the shoulders farther back. You now should have Megatron in robot mode. 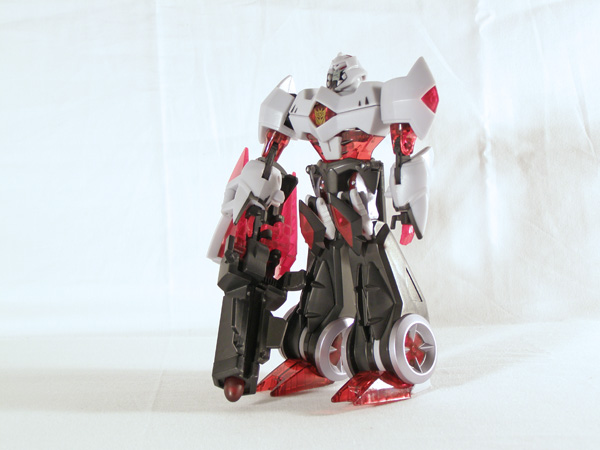 Megatron certainly has a bulk look to him in robot mode. The mostly light silver (freakishly white looking actually) color scheme takes over on top, with the legs being black. His feet, hands (minus thumb, which is black), and shoulder sides are in translucent red. The red also shows on the abdomen and on his chest where the Decepticon insignia resides. The head sculpt is well done, with small but red piped eyes. For some reason, his mouth is left open. 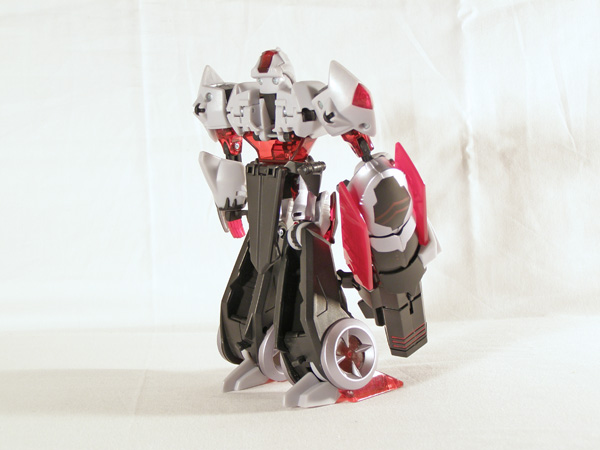 The real party crasher to this mode is the fusion cannon. It's big, perhaps too big. You have to bend the arm to get him in a standing pose. Also, the clip that keeps it in place is awkward, so the cannon is at an angle to his arm. The sword conversion is simple. With the cannon unclipped, pull the back part up a bit and flip the right blade under and around. The left blade will flip forward as you do this. However, it looks pretty silly to me in this mode. 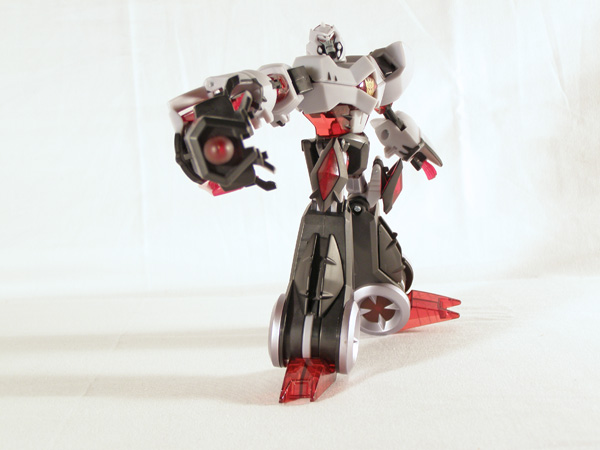 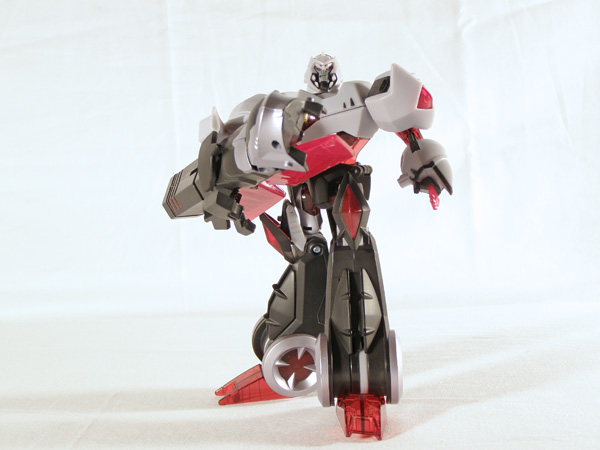 Almost all the joints are ratcheted for solid poses. Part of the tail assembly gets in the way of leg articulation and the cannon can cause some experimentation with balance.

: Funky cannon clip and limited leg articulation are the only gripes. Overall -

: It's a sweet mold and a nod to the fans wanting more Cybertron vehicle figures, but it's not for everyone.
Size Class: Voyager
MSRP: $20