Previously, I covered one of the figures for the Animated line that features a Cybertronian alt mode. On this review, I will cover the other figure that gets this treatment. Though only a deluxe, Optimus Prime's Cybertronian mode is nonetheless familiar to the alt modes that he sports on Earth... somewhat

"As a team, we can accomplish anything"

Despite having washed out of the Autobot Academy, Optimus Prime is a natural leader. Trained to lead the bravest of the brave into battle against overwhelming odds, he eagerly looked forward to his first assignment. It's just too bad the Decepticons were defeated ages ago, and the only crews left to lead are the maintenance squads that keep the Space Bridge network running. Since his assignment, he's lost track of his ambitions. The last thing he expects is the chance to test his leadership abilities in a battle to defend his home and fight for freedom. 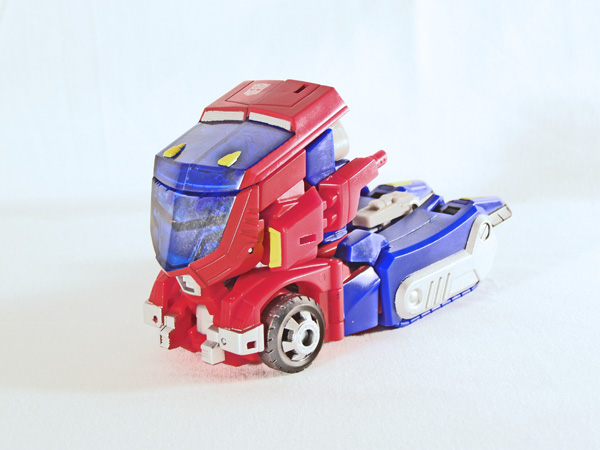 Even on Cybertron, Optimus Prime takes form of a heavy duty semi truck. He also keeps his primary colors of a red front with a blue rear. He has yellow clearance lights on his roof, with wraparound glass reaching said roof. The exhaust stacks are curiously at an angle and point towards the back. He has 2 wheels up front with molded treads on the rear. There are 2 plastic wheels underneath to assist in rolling. His weapon neatly stores in the rear. 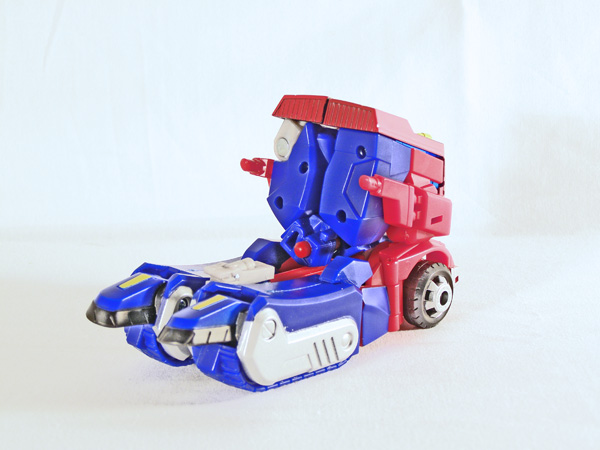 It's definitely an other-world design, but has functionality to it. The weapon does a double duty of staying concealed between the rear treads while covering the dead space between the treads, so kudos for that. The only detraction is the visible arms and hands at the rear. Otherwise, nicely done for a deluxe.

If you transformed the Earth mode Optimus in the Battle Begins 2 pack, you pretty much know how to transform this Prime. Pull the rear end out in 2 steps, first unlocking the legs then pulling back his waist. You can then flip the two tabs near the waist forward. Spin his calves 180 degrees and fold down the feet. Remove the roof panel completely. Take the cockpit and pull it down, which will give you room to fold the waist down. You can now flip the forearms up and remove the axe.

Take each arm and fold it down and away 90 degrees. Finish folding the windscreen down and under itself to form the chest. You'll see a linchpin that connets to the waist. Take the peg on the waist, position it behind the chest and lock in place. Spin the shoulders around 180 degrees. Then, spin the exhaust pieces around so the wider end is flush to his wrists. Straighten the arms out, fold them down to his sides and you're done! 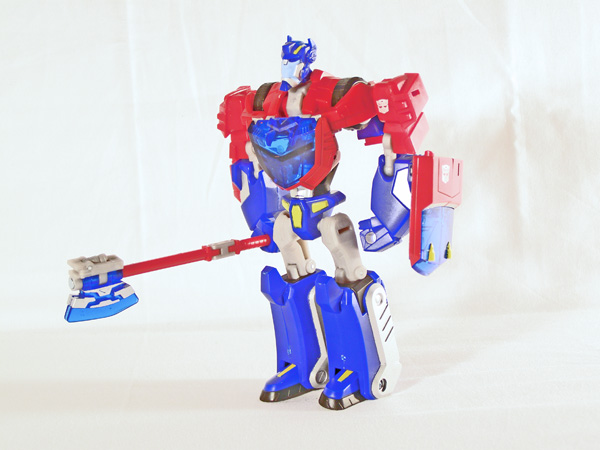 Optimus Prime has a way of keeping his same general robot appearance in every series. This one is no different. Although his forearms are blue with silver accents, most of the colors match up with any other Prime. This includes the yellow on his pelvis area. His head sculpt is without the battle mask, and wears a friendly smile with blue piped eyes. The roof panel can be clipped to his left arm via a hidden peg mount. 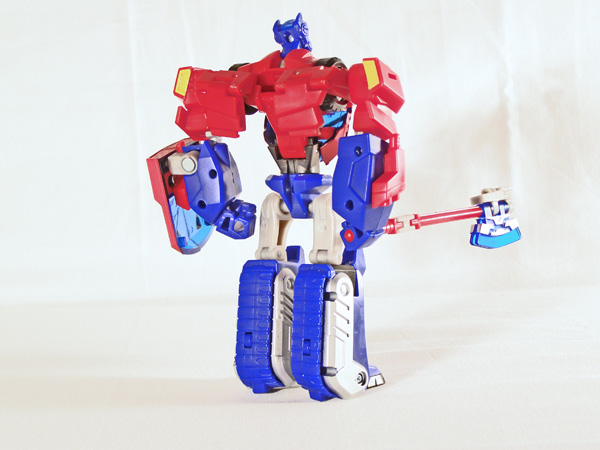 The axe fold out straight and slides into either hand. The axe has 3 configurations. As a default, it is a single bladed axe. Grab the center of the axe blade, pull it apart, and now you have a double edged axe. Finally, if you take the arm shield off and split the roof panel slightly, you can make up the 3rd configuration. For those who prefer the axe that came with the deluxe Earth Prime, you'll be happy to know fits in this Prime's hand as well. 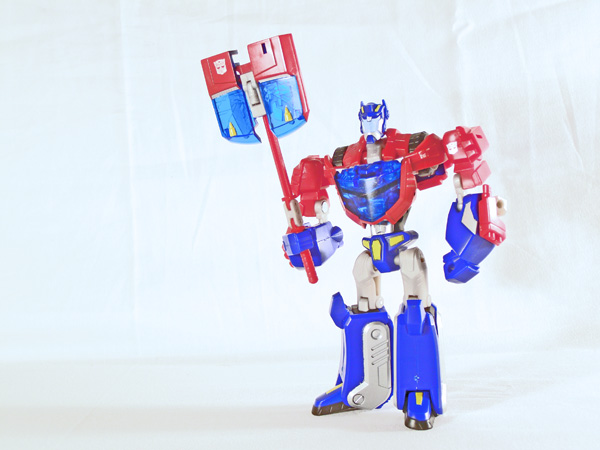 There's really not much to fault with the robot mode. It has good proportions and the limbs aren't out of place. If there's anything to fault, it might be with the shield. The peg (on mine at least) is slightly too small for the holder. It tended to limp down a lot. Maybe thickening up the peg a bit or narrowing the peg holder on his arm would resolve this. Perhaps another small gripe is the axe. It's puny compared to the Earth mode axe. Good thing you can swap axes then. 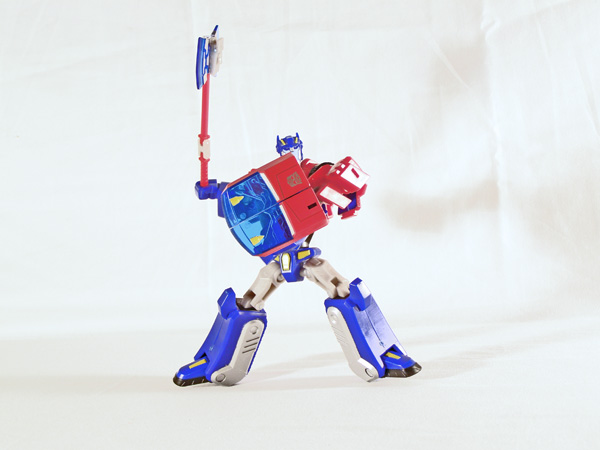 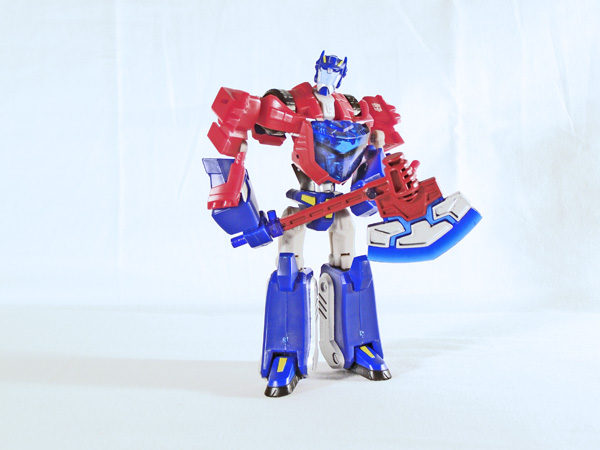 Overall, great poseability can be had. You might have to tilt the head down a bit to get the rotation you want out of it. The only real bummer is that his hands are stationary and cocked at 45 degrees. However, you can counter that it gives his a brawnier look that way.

: One of the best Deluxe sized Primes out there, with excellent articulation to boot. Overall -