One of the more infamous robots of the TF line that hasn't seen much action until lately is Bumblebee. He has enjoyed a very long hiatus up until the Classics line a couple of years ago. He is now featured in the Animated series, but with a whole new attitude. No longer is he the mild mannered over-achiever. Now he's the young bot that has to prove himself, as well as his ego. This review focuses on his action figure.

"Enough talk, it's time for action!"

The youngest robot on the crew, Bumblebee is what some - especially Autobot Ratchet - would call over-eager: It's not his fault he prefers action over talk. Talk is just, you know, boring. Especially when you could be racing at top speed into a fight, or boosting into the air to launch a few well-placed energy stingers at an enemy. Nothing scares Bumblebee, not even Megatron. 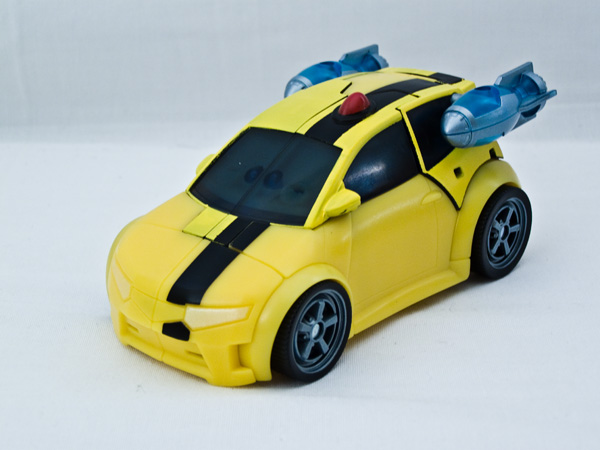 In the show, Bumblebee scans a police detective car to call his alt mode. The car happens to be a racy little compact hatchback. It is mostly yellow, with one black comp stripe running from bumper to bumper. There is also a red beacon light on the hood. Pretty flashy for an undercover car. On the rear bumper, towards the left, you can spot an Autobot insignia almost like it was a bumper sticker. 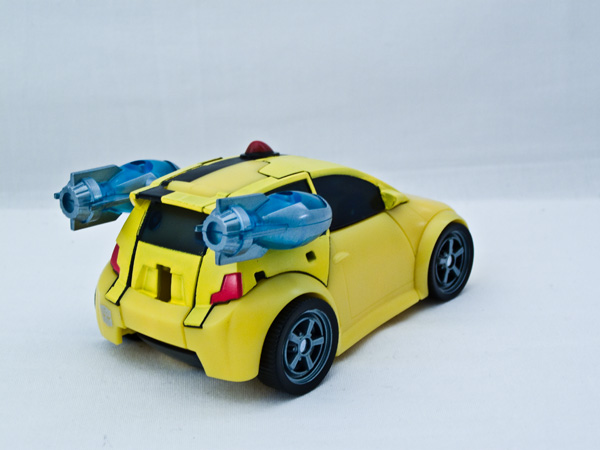 There are two episodes where Bumblebee sports twin rocket engines which bolt to the rear of his hatch. Those boosters are included with the figure. The clip on with pegs to his rear hatch. The nice trick is that, when they're not clipped on, you can't tell where the pegs are. They mask in nicely with the rear window. Overall, a nicely done alternate mode.

Bumblebee has a trick transformation sequence. First, pull the rear windows up and away from the rear fenders(you can leave the rockets in place if you choose to). Unclip the doors from the front fender. Now, take the front fender and flip it over teh cockpit 180 degrees. This will show his head. Twist the legs 180 degrees. Pull the legs apart, the flip the front grillwork 180 degrees forward to form his feet.

Unclip the windscreen from the back of his calves and rotate those 180 degrees. Bring the 2 rear window pieces together (they interlock when aligned right). Gently pull the arms away and back from the body. The reason I say GENTLY is because the plastic is ridiculously cheap and I chipped a ball joint socket the first time I pulled an arm back. Fold the 2 stinger pieces underneath his forearm (if not in use) and flip his hands out from behind. You're now done! 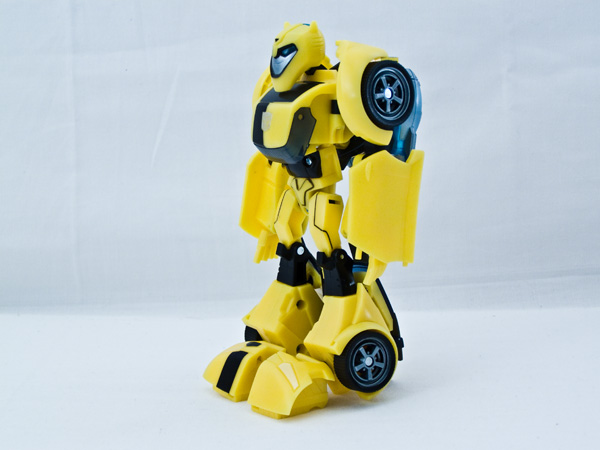 Out of the figures so far, this has to be the least show accurate of any. For one, he's gained quite a bit of weight (especially the head) and doesn't look as streamlined. Second, the paint apps don't match up. Stripes are either in the wrong place or missing entirely. His footprint is also enormous. Compared to even the deluxes in the line, he's quite a bit larger in scale than in the show. 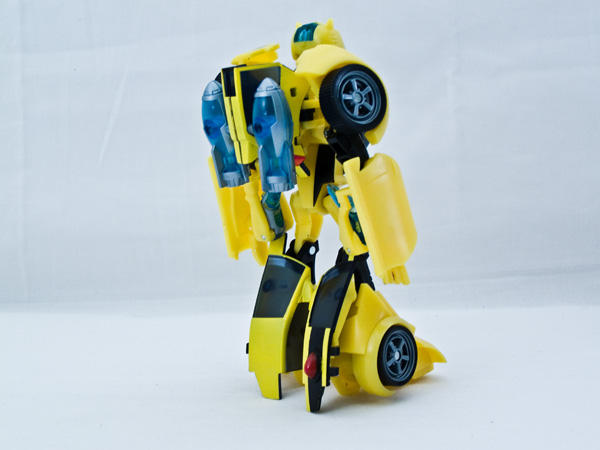 At least he has a nice head sculpt. It comes complete with blue piping for the eyes. The stingers also work as in the show. Flip them both out forward and they can clip together to form a larger stinger. However, when not in use, they sorely stick out and can get in the way. 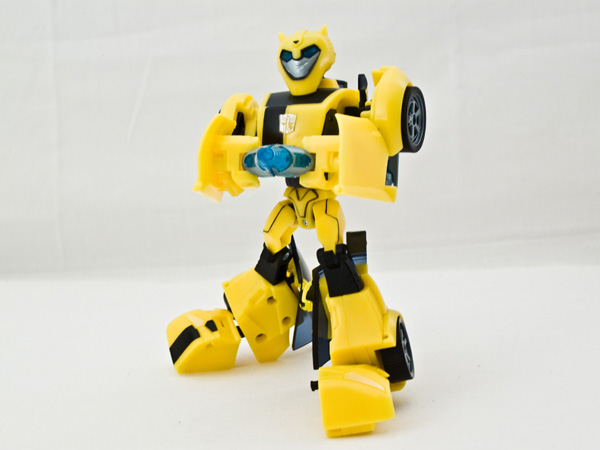 
The joints are set up right, but the shoulders suffer from some kibble issues in which the rear wheels block full spread.

: He will be bought because he's Bumblebee. Perhaps that's why the shortcomings in robot mode are so irking.
Size Class: Deluxe
MSRP: $10