Grimlock has been one of those fan favorites that never subsides. Big, powerful dinosaur with an ego that doesn't match his brain capacity. Animated has given us a new spin on this old favorite. This review looks at the Dinobot leader in full detail.

"Where are Decepticons? Me Grimlock getting hungry!"

Grimlock more than lives up to the reputation of his Tyrannosaurus Rex mode. Ill-tempered, powerful, and always ready for a fight, he loves to throw his weight around. He like the way the ground shakes as he stomps around, and the way people scatter when he roars. He's happiest on Dinobot Island, where he can stomp and roar to his spark's content, shattering trees with his tail, and breathing jets of flame into the sky. Every once in awhile, though, he prefers to find the biggest, most powerful Decepticon he can, and smash its chassis to pieces. 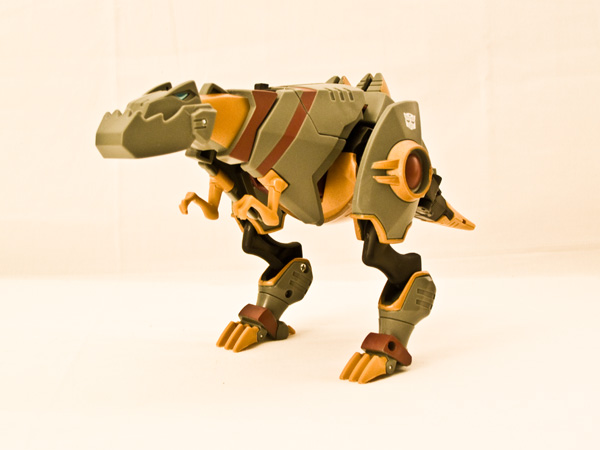 As mentioned in his bio, Grimlock keeps his familiar T-Rex alt mode. He is primarily gray in color, with some red and gold accents thrown in. You can also spot some black on his legs and tail. The eyes on his head are piped blue, which is a nice touch. His jaw is also spring activated by a lever behind his head.. 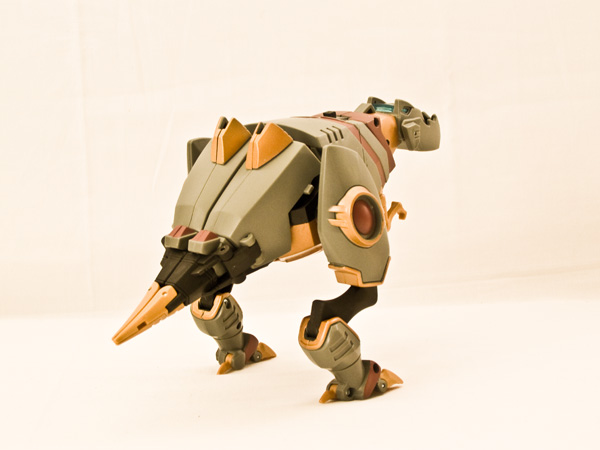 The proportions are a little awkward. His tail isn't long enough to provide counter balance, and his leg movement is a bit stiff. It can take some time to get poses from it. Also, if you happen to stare at him frontside you can clearly as day see his robot mode head. For a Voyager class figure, that's a bit below average. However, it's still one of the better Grimlock molds out there in alt mode (Don't bring up Energon).

It's amazing how faithful the transformation is to the original G1 figure. Take the panels attached to his dino arms and pull them out slightly. This will free the panels on his back. Split the tail in two pieces. You can then flip the legs back 180 degrees. Take the bottom pieces of his legs and swing them back to connect behind his feet. As you pull the tail down against his calves, you'll see a peg where you can connect the end of his tail to.

Grab his chest and push it up to lock in place. Pull the dino arm panels all the way back and his dino head will fall back naturally. Fold the dino arms into the panels. It can be a bit tricky, but push the dino legs into the thighs to create (and shorten) his arms. Once you have that done, take his claws, fold them inward, then twist the wrists 90 degrees to form his hands. Don't forget (like I did) to swivel the head up and lock it to a peg on the backside. There you have it. 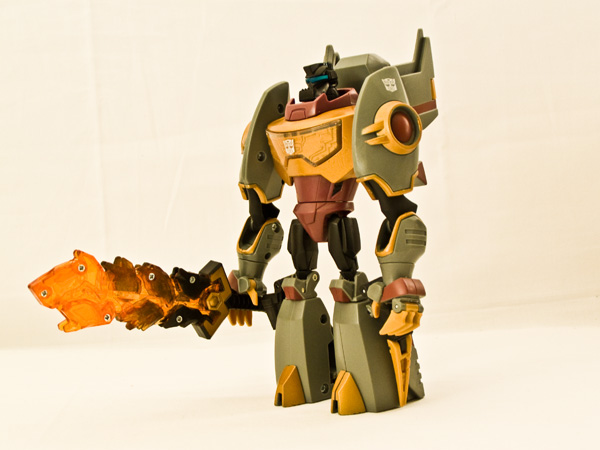 Although not completely show accurate, Grimlock still fits in well with the line. The main color change is that his chest is all gold with red on the abdomen and neck area. The thighs are done in black, as is his head. The eye visor is done in the same blue piping as his alt mode eyes. 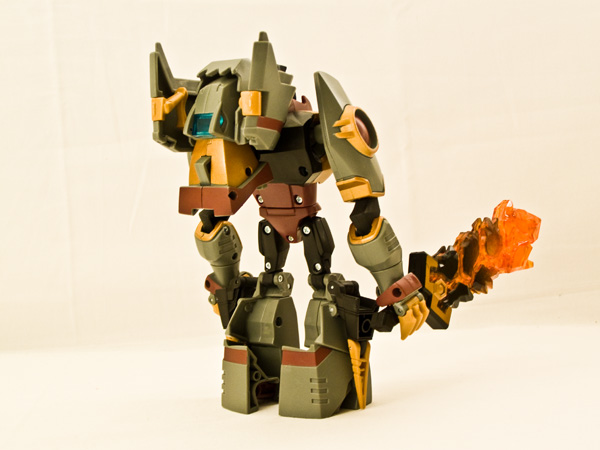 One gimmick that he possesses is his sword. The sword looks like it's burning like fire with a black and gold base. It can clip on to either hand with the jutted bar going inside the hand. This is important, because if you flick his wrist 90 degrees with the sword in hand, flames will pop out automatically. It's a neat little trick. The flames can be reset manually by another lever on the sword's 'blade'. The box mentions something about a "removeable jet of fire breath" but the instructions didn't elaborate. Contrary to how the picture on the box might lead, the sword is one piece. Perhaps this is something that was abandoned. 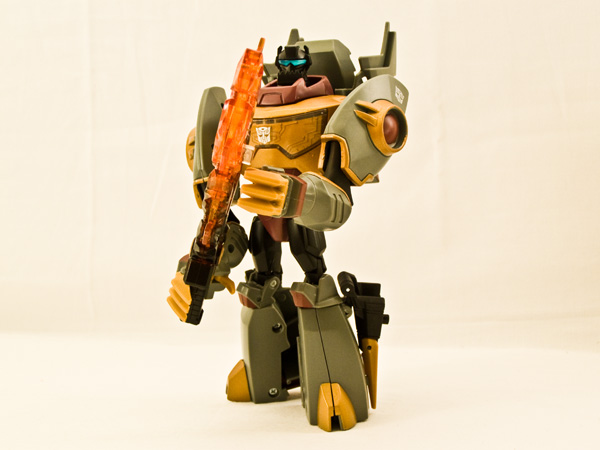 
The hips and shoulders are limited in movement and hurt articulation a bit. However, it's still very possible to get some nice poses out of him.

: Save for the wide open robot head shot up front, a nicely done mode.
Robot Mode -

: Articulation hurts where it counts, but otherwise a great robot mode. Overall -

: Although not without it's fault, it's still a must have. Especially for the Dinobot fans.
Size Class: Voyager
MSRP: $20