Animated has been doing a great job of throwing nods to all generations of Transformer fans. This review focuses on a tribute to the fans of Beast Wars. Originally known as Elita One, she was trapped on an alien planet and used her power to save herself. Instead, she merged with the spider creatures that trapped her and became a mutant.

"My sting will be the last thing you feel."

Blackarachnia started out as a promising young recruit at the Autobot Academy. Accidentally abandoned on a hostile ailen world by her teammates, she did the only thing she could - merged with the organic monsters that swarmed the caves in which she was trapped. Emerging as a technorganic mutant, she vowed revenge on the Autobots that had left her behind, and joined the Decepticons in their war of conquest. 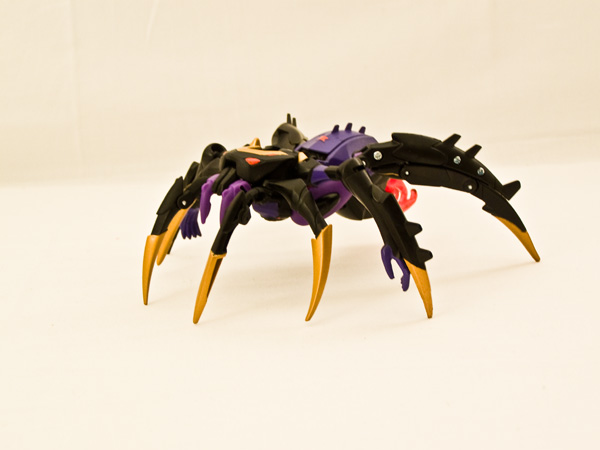 Blackarachnia unwillingly has the form of a giant spider. The spider has a purple abdomen with a black thorax, accented in places by gold. The legs are mostly black with gold feet. She features 4 red eyes (painted on) and purple mandibles. You can spot a red hourglass figure on the abdomen's top. The only robot kibble noticeable are the hands on the 3rd set of legs. 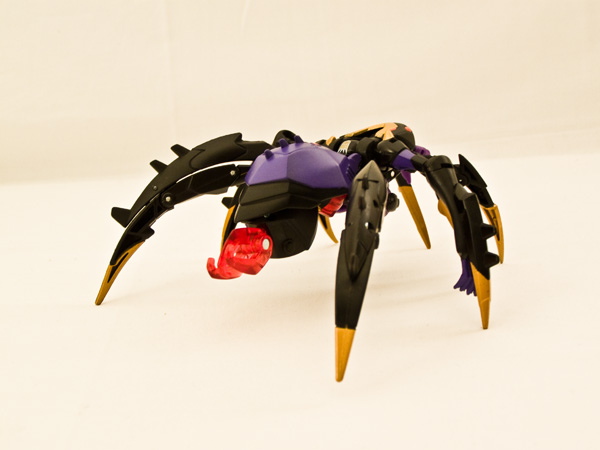 There's a lot of mobility in this mode. The mandibles up front are on ball joints so you can get some pincer action from them. All but 2 of the legs (the 2 directly behind the front) are hinged at the knee. While the 4 rear legs are independent of one another, the front legs are tied together from each side, right and left. She also features a claw on the back. You can pull the string out approximately 2.5 inches and use the claw to grasp. A lever auto retracts the string back in.

The first step is to remove the claw on the back. It comes out as one piece. Take each rear leg (all 4 eventually) and twist the halves to form the robot limbs. Find the trap door on the abdomen and push it open. Align the rear legs together, then move the front legs together and off to the side. Now, take the spider's face and press it forward to flip the robot head in place.

The spider legs up front can twist 180 degrees, then fold back. If you haven't done so already, fold out the front feet. Take the chest area and press up to hide the gap that's visible. The spider abdomen folds up on itself slightly and falls neatly on her lower back. You now have a robot mode! 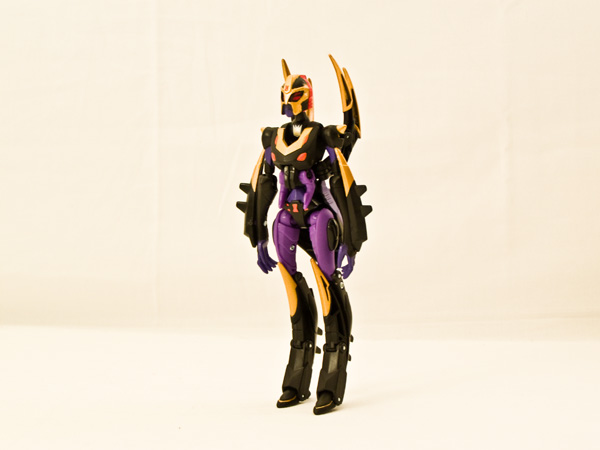 They do a good job of keeping this figure show accurate. The abdomen, thighs and upper arms are in purple, with the calves, forearms and chest in black. Gold and red accents appear in various places. The head sculpt is accurate and features an hourglass on her forehead. Although there is red translucent plastic on the back of her head, there is no light piping for her four eyes. 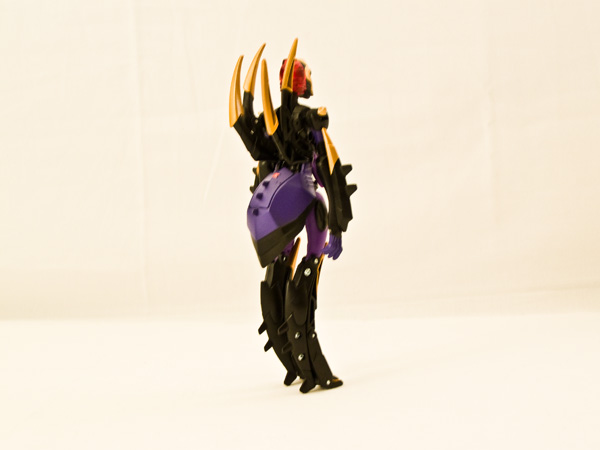 There's two ways you can use her little hook. You can either attach it to the inside of either of her arms to use it as a grapple or you can connect it back to her spider abdomen. When connected to the abdomen, you can flip the abdomen up 180 degrees and use the hook to suspend Blackarachnia off the ground. Hooking it to her arm can be a little cumbersome and compared to Energon Arcee's setup. The peg also tends to fall out of place. 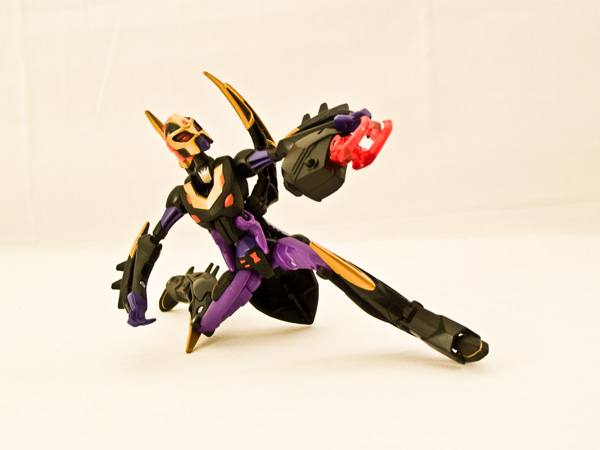 
The only real thing hurting this figure is the very small footprint. Other than that, very good flexibility.

: Only a small footprint spoils this otherwise great robot. Overall -

: One of the better Deluxe figures in the line, only very small shortcomings.
Size Class: Deluxe
MSRP: $10