In the Transformers universe, more than one warrior has been thrown at us which had an alt mode of a motorcycle. Every time, something just didn't add up. For Animated, they give yet another shot at a bike. This review covers Prowl, a combat trained master of Circuit-Su who prefers the quiet beauties of the universe.

"Through stillness you will find truth."

Prowl has spent his life studying the secrets of the ancient art of Circuit-Su. Through its teachings, he has discovered the beauty of pure logic, and the invincibility of reason. All things - even combat - are subject to reason. If one is willing to calmly apply one's mental faculties to any problem, the solution will soon reveal itself. He often finds the chaotic antics of humans and other Autobots frustrating, but he will stop at nothing in their defense. 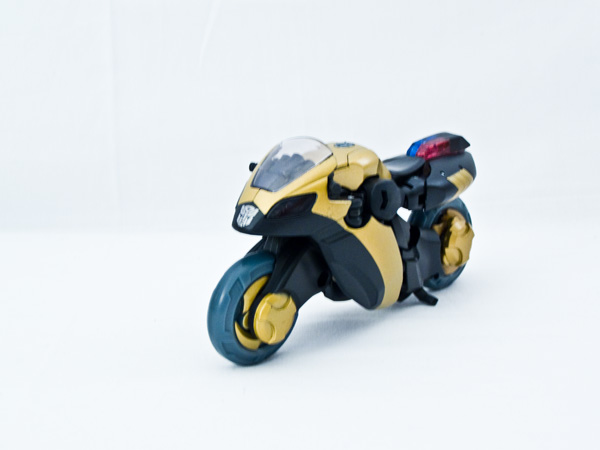 Prowl is presented in alt mode as a superbike dressed up for police duty. The bike is primarily bronze with gold accents. There is a red and blue lightbar positioned behind the seat. Where you would expect a headlight is instead a silver Autobot insignia. The wheels are done up with gold rims. 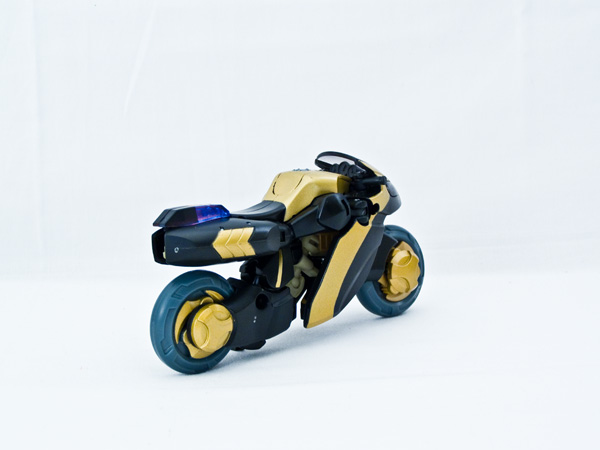 The level of detail in this mode is impressive. For one, stare under the windscreen and you will find a semi-detailed instrument panel aching to have some color put to it. You can clearly spot a fuel filler cap on the fuselage. To make things even better, they actually put a kickstand on the left side. The kickstand works well to keep the bike propped in place. Kibble is at a minimum, with only his hands barely showing up in the rear.

The transformation is very innovative. First, pull the rear fenders away and forward of each other. Make sure you pull them all the way out, as there's a 2 stage ball joint setup. Grab just under the seat and pull the thick piece up and around 180 degrees to form his left leg. Now, pull his front wheel down, then grab from behind and pull his right leg down and forward 180 degrees. Turn the pivoting piece on his end to form his foot.

Pull the front end down about 90 degrees to start forming the chest. Before completing the process, grab where the 2 legs meet and twist it 90 degrees clockwise. Straighten his legs to complete the lower half. Now, complete folding down the chest until it locks in place via a peg. The handlebars can flip up and in 180 degrees to hide behind the windscreen. Take the rear fenders and push them in to expose his hands. Fold the arms to his side and you're done! 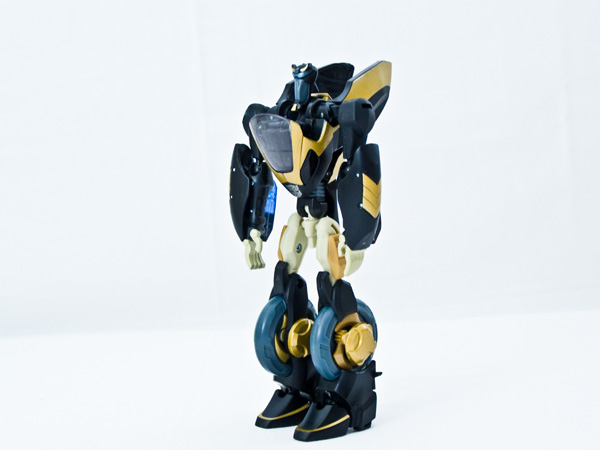 Prowl maintains a good deal of show accurateness in robot mode. White now show up in the thighs and hands, but otherwise the bronze and gold motif remain. While the face is nicely done, the mouth seems much too robotic. Reminds me of Classics Rodimus in a way. 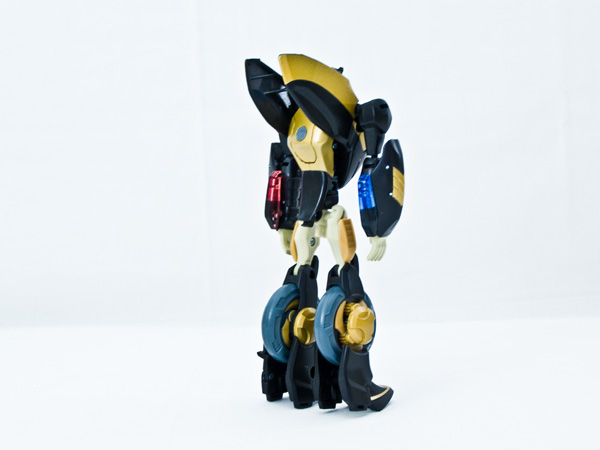 On each outside of his leg, you will find storage of his ninja stars. Wedge them out of place, then take only one of the blades and pull outward. The 3 blades are geared together so all 3 points will fold out at once. There is a star on each leg. The point slides easily into Prowl's hand and does a decent job of staying in place. The lightbars on his forearms can also swivel outward 180 degrees to form a "flash blaster". If that's not enough weaponry, he comes with a traffic signal on a rope that can be used as a mace. However, this 'weapon' has a harder time staying in place due to the non-hinging fingers. 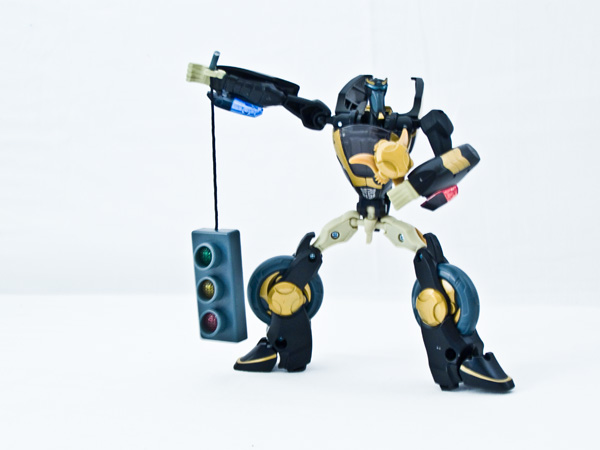 
The only real limitation is the head, as it is blocked by his shoulders. The ball joints may need stiffening, as my figure was very loose, particularly in the hips.

: Great articulation and weaponry for a Deluxe Overall -

: Should be one of the first deluxes to go after, excellent value.
Size Class: Deluxe
MSRP: $10