Optimus Prime seems to get a ton of love lately in any line, with no less than 5 figures representing him. With the street date upon us, we've already seen 2 iterations of him. Now, prepare yourself with the third version of Optimus Prime. This Prime is the voyager class figure of him in Earth Mode.

"While I function, Earth is under my protection"

When Optimus Prime crashed to Earth with the rest of the Autobots, he didn't really know what it meant to be a hero. He spent most of his time in space dreaming of glory, but it wasn't until he was first faced with the terrible decisions that inevitably come with leadership that he finally understood. He became a true hero - a being who does what he does not for the glory and fame, but because no one else can do it. 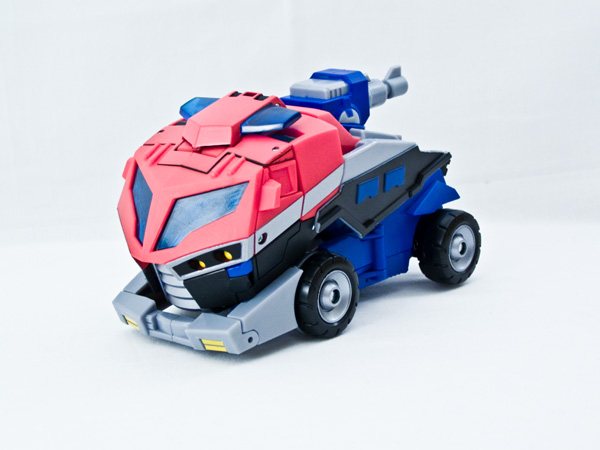 Optimus Prime is represented as a fire truck in the Animated series. However, for his action figure, he makes do with just the cab half. The styling is much different from his Battle Damage deluxe mold and more accurate to the animated show. He is mostly red on the upper cab, with some silver and black at the beltine and a huge silver front bumper. The rear is mostly blue, with part of his 'trailer' portrayed. This piece features a water cannon mounted rearwards. The cannon can be rotated 360 degrees, but tends to pop off easily. He retains the translucent blue lightbars on his roof. 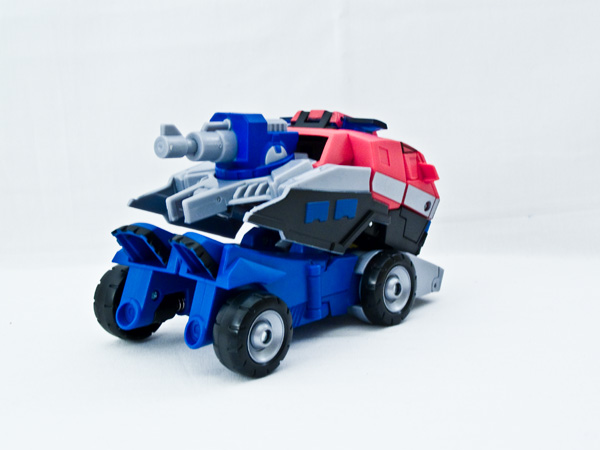 The detailing is much cleaner with the Voyager version in most areas. Curiously, the clearance lights on the roof are not painted, but that's an easy fix. Should you want more show accuracy, simple take off the 'trailer' half and you can have just the cab. Unlike the deluxe mold, the rear end has no gaps. Overall, a much cleaner approach to an already great alt mode.

Transformation is NOT similar to his Deluxe mold. Grab the front bumper at each and and pull it apart, seperating it in 2. Spread the pieces back 90 degrees. Next, take the rear end and spread it apart slightly to disconnect his legs. Push the rear wheels under and around until they're on the inside of his legs. This will give you room to finish his leg conversion. Take the corners of the bumpers and fold them down 90 degrees. While pushing the bumpers back into his legs, fold them in half. The blue inside will clip to the sides. Finish the lower half by pulling out his legs and flipping out his feet

The box advertises a "gravity spin" transformation. By pushing a black button on the rear, the waist is supposed to automatically swivel and flip forward. While not flawless, you have to make sure everything is aligned right to do it. Don't forget to lock the waist in place or it will flail around. Flip out the black panels below the headlights and fold the sides back 180 degrees. Now, grab the rear half of the cab near the top and pull it out, then forward 90 degrees to form the shoulders. Line up the arms, with the black flaps facing down and away from the body, then flip out his hands. Fold the lightbar completely back, then flip his head up. Flip forward the black piece attached to the lightbar until it secures to his neck. 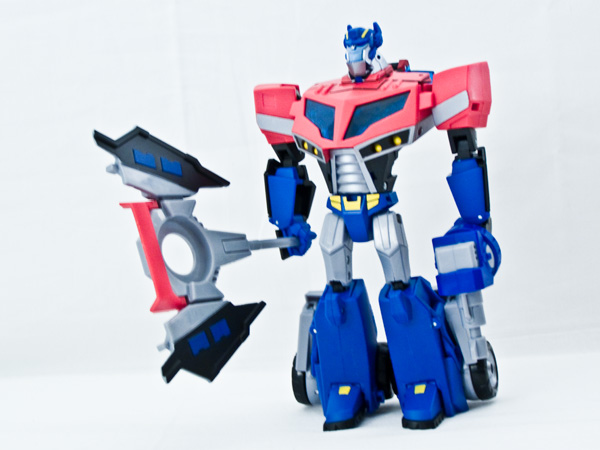 If you thought the deluxe Primes looked good, this Prime puts them to shame. This is just about as show accurate as it gets. The only difference is the bumpers lying on the sides of his legs. The semi-trailer attachments folds out to become his energon axe. It doesn't look all that great, but for those who share the excitement, the Battle Damage axe fits perfectly in this Prime's hand. The water pistol also separates from the axe and can be used as a hand weapon. 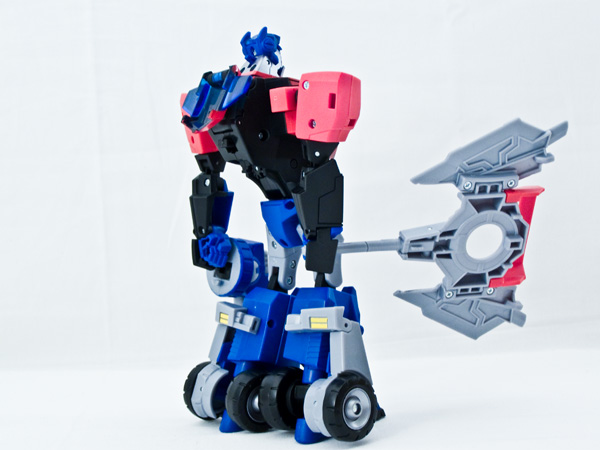 The head sculpt is spot on perfect. Initially transformed with the mouthplate engaged, you can use the lever on his neck to retract the plate and expose his mouth. The plate hangs over his neck. It would have been great to find a way to split it to his sides, but nothing's perfect. For more enjoyment, it features blue piping for the eyes. Back to the water pistol. Underneath, there is a small rubber grommet. If you remove the grommet, you can fill the pistol with water. You now have a real working water pistol! Push the nozzle inward and you'll get a jet of water to squirt out. 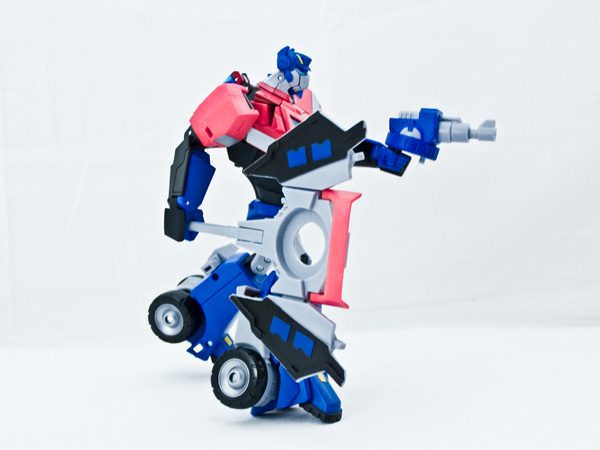 
Although the hands are meant to be secured to the black tabs, you can choose not to do this. You will then get inward poseability for the wrists. Although most of the joints are tight, the axe can make whichever arm it's on get a little squirrely. 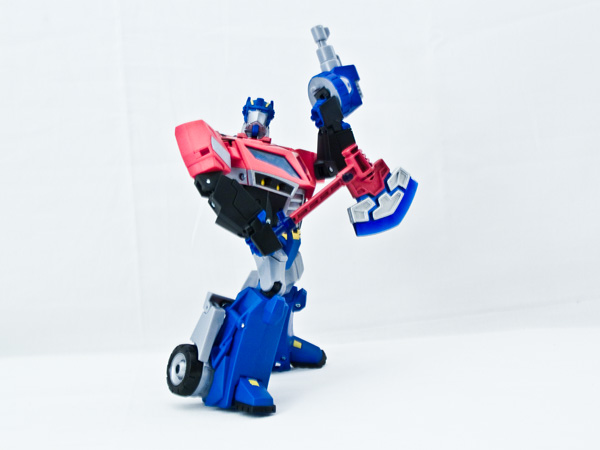 :The only way this mode can get better is with a trailer attachment
Robot Mode -

: Virtually flawless, only the axe will leave you underwhelmed Overall -

: If there's only room for one Optimus Prime in your Animated collection, this one should be it
Size Class: Voyager
MSRP: $20