After several months of lull with repaints and redos of movie figures, the fandom is suddenly getting a one-two punch of Animated and Universe figures. The street date is still the first of August, but Toys R Us stores are being sighted as increasingly breaking the street date. This is the first of three reviews covering the first wave of Universe figures. This review will feature Prowl, the Autobot's lead logician and second in command. Before we get too far, though, let's look at the packaging.

The Univere packaging has been updated since it's first run. It seems to blend in the best attributes of subsequent releases. A portrait of the robot form can be found on the upper left of the clamshell. The faces are really robotic, eschewing all form of expression and making them look almost lifeless. There is a script on the upper right of the clamshell commemorating this as the "Classic Series". The bottom announces the character's name along with the type of weapon he yields. The back contains the usual bio and tech spec along with fellow characters released on the same wave. Curiously, they have done away with the character quotes.

As the right and man to Optimus Prime, Prowl is right at home in the thick of battle against the new Decepticon armies. Confused Autobot are scattered across the universe, easy pickings for the gangs of more organized Decepticons. As a dedicated administrator and logician, Prowl fels it is his duty to whip them into shape, and get them ready for a fight. It's only a matter of time until the Decepticons get themselves a real leaders, and the Autobots need to be ready. 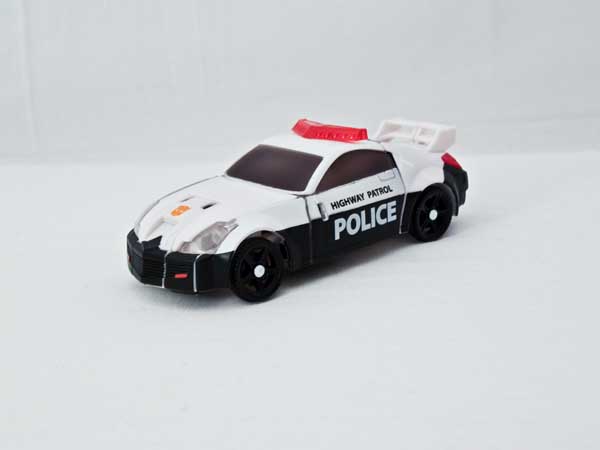 Way back in G1, Prowl was molded after a Fairlady Z, or a Nissan 280ZX as they're called in the US. Fitting, then, that Prowl's current alt mode loosely resembles the modern day Fairlady, which is now known in the US as a 350Z. He also retains his classic color scheme, with black on the bottom and white on top. Although the shield is gone, the side doors pronounce "Highway Patrol" on the white half and "Police" on the black half. There is an air scoop located right on the front end, with an Autobot insignia just behind it. You can also spot an aero styled red lightbar on the roof. 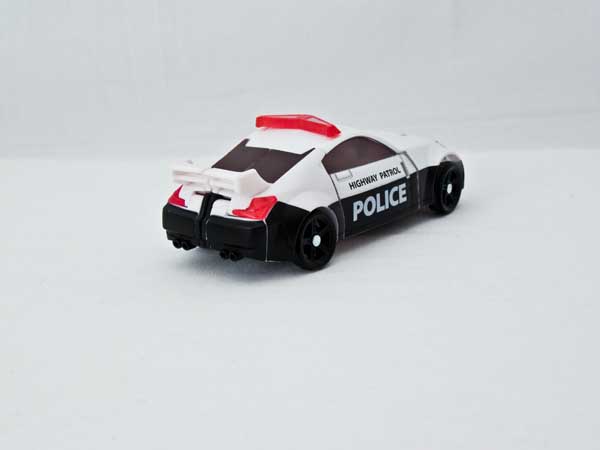 Overall, the design is real nice and sports nice details such as the air scoop and quad tailpipes under the rear bumper. One noticeable gripe is the gun. It stores under the front end, but the stock that goes into his hand just about hits the ground, so be careful if rolling the vehicle around. Better yet, don't store the gun where it's designed to go. It really doesn't stay in place too well anyhow. Also, quality control is borderline poor, as there are many instances of overspray and thin paint to be found.

Transformation is a bit different from others figures and has some familiar aspects of G1 Prowl while throwing in new twists. First, pull the front fenders (which are connected to the doors) away from the body of the car. They will also pull sightly forward. Lift up on the rear bumpers, then take the backglass and flip it back 180 degrees. Finish the legs by folding the feet down into place and flipping his haunches back. This may require a thin, blunt object as they're buried in the feet pretty well.

Now, take the fenders and spin them so the headlight glass is pointing forward. These can fold back against the back of the doors. Take the arms and pull them out in a wingspan motion Seperate the windscreen from the hood, then Pul the hood section down. Peel the windscreen back so you can put his shoulder launchers in place by flipping them over. Pull the air scoop forward so you can release his spring loaded head, then return it to it's place. Press the windscreen up against his back. All that's left now is adjustments to the shoulders, arms and doors and you're done. 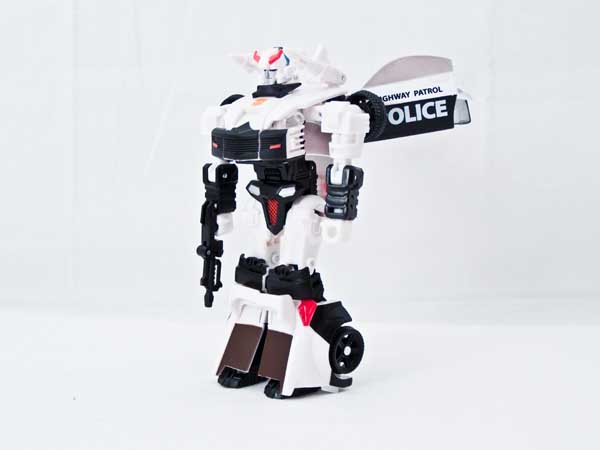 There is no mistaking that this Prowl is full of G1 tribute. From the twin mounted shoulder rockets to the "winglet" doors, the figure is instantly recognizable. Besides a little red on the groin area, the color scheme is still predominately white and black. The Acid Blaster folds out and can be placed in either hand. He keeps a rather tight grip of it, too. 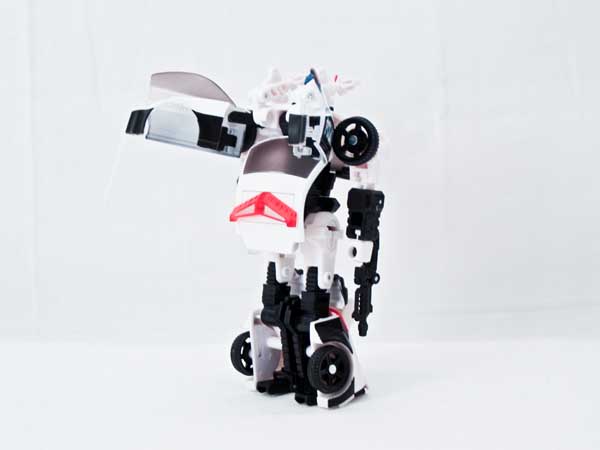 What is most impressive is the head sculpt. The makers zeroed in on the G1 look and made this sculpt literally flawless. There is also blue piping for the eyes, making it a bonus. I really wish I could find a flaw with the robot mode... but I can't. They really outdid themselves on this one. 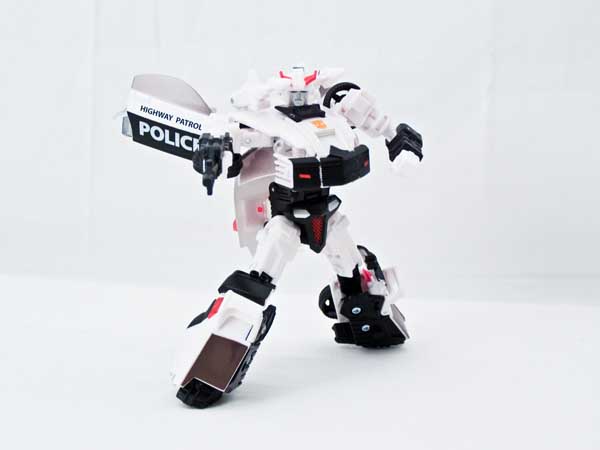 
The only real limitation is with the roof of the alt mode. You might have to move it up a bit to get waist articulation, but then you create clutter for the arms due to the tight space between the roof panel and the doors.

: There couldn't be a finer tribute to the original Prowl than this figure here... plus it poses! Overall -

: This is a hard one to hate, an easy one to buy and a great way to kick off the Classics 2.0 series.
Size Class: Deluxe
MSRP: $10