The Triplechangers were one of the more successful gimmicks in the G1 era. The ability to get 3 modes for the price of 2 was pretty tempting, even if one of the modes wasn't all too convincing. The TF universe has thrown us Triplechanger like figures here and there, but they never really felt like one. It wasn't until Astrotrain was released with the Classics line that we saw an honest-to-goodness Triplechanger again. As Astrotrain came out with the first wave of Classics figures, Hasbro repeats itself by offering another Decepticon Triplechanger as the first wave of it's revamped Universe line. Tankor (or Octane if you prefer) is still a caniving sleazeball who holds the fuel reserves for the Decepticon army.

Other Decepticons would call Tankor a dirtbag, if it wasn't for the high-octane fuel he supplies to them. He's a sleazy liar who wil steal or manipulate anyone, so long as it helps him get his way. As such, he fits right into the most dangerous battlegrounds across the universe, where survival depends on maintaining an advantage. The only reason other Decepticons will have anything to do with him is that he always sems to have a supply of fuel when everyone else is tapped out. 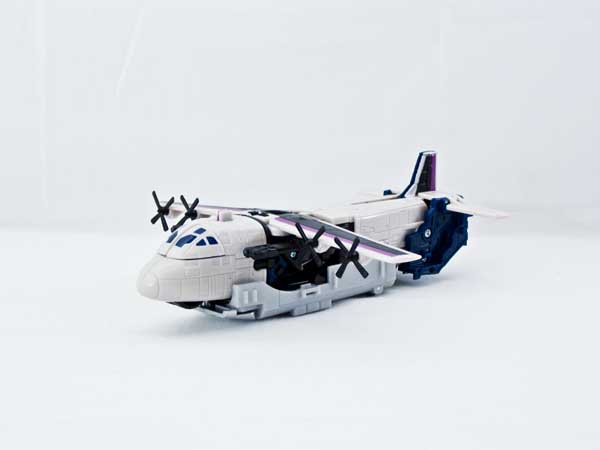 Tankor's first alt mode is a quad engined turboprop plane. Perhaps in this day and age, the efficient turboprop motors were seen as more PC than jet engines, but I'm probably overthinking this. Mostly white in color, he does sport a black fuselage with a purple stripe out front. The black and purple theme is also found on the tailfin, although the rear stabilizer wings are all white. There is also some dark blue on the lower part of the tail section. There are three useable wheels on the belly. Finally, there is a double barreled cannon on either side of the wings. 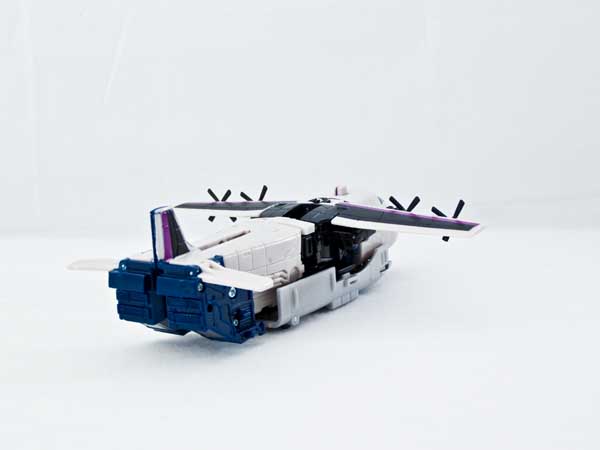 Although the wings are a bit short, this alt mode looks convincing enough. There are plenty of gaps to be had, especially just beneath the wings. The "snap on" belly also looks out of place. Overall, it is an improvement over his G1 counterpart. Next, we'll look at his tanker truck mode.

To get to his truck mode, first fold his wings up and remove the lasers. The wings are on a common gear, so as you lift one side up the other will follow. Make doubly sure you blend the propellers together and keep the wings level with one another, this can be cumbersome later. Lift the rear stabilizer wings up, then grab the blue and flip it up and back. Pull on the blue to extend the rear section back. Lift the rear up 45 degrees. Split the rear section in 2, then take each side and rotate it 180 degrees to form the front cab of the truck. Finish lifting up the assembly until it's straight up from the plane cockpit.

Now, the tricky part. De-extend the cab back down, then align the tabs inside the truck cab to clip onto the folded up wings. Between the propellers and the clips, it can be cumbersome and if not done right it's impossible to fuse the 2 cab halves together. Once that's in place, flip the plane's belly up to form the tanker top. You will see a Decepticon insignia right behind the plane cockpit. Take the panels on either side of that shield and fold them inward. Split the cockpit of the plane, then note the inside hinge. It folds back and in a sweeping motion to form the rear wheels. Clip the pegs into the tanker top. The lasers peg into a hole on the back of the tanker. 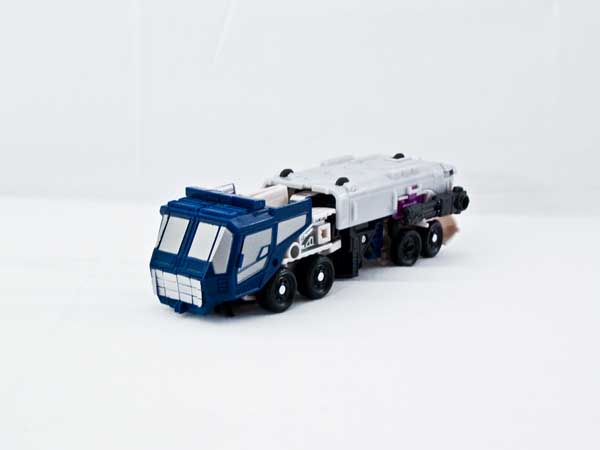 The tanker mode receives a different color scheme. The front cab resembles a Eurpoean style cab and is all in blue with silver windows. There is a lightbar molded into it but its the same blue as the cab. The tanker top is silver, while the bottom is a combination of black and white. The tanker has 8 wheels, but the first set of rear wheels are molded in. 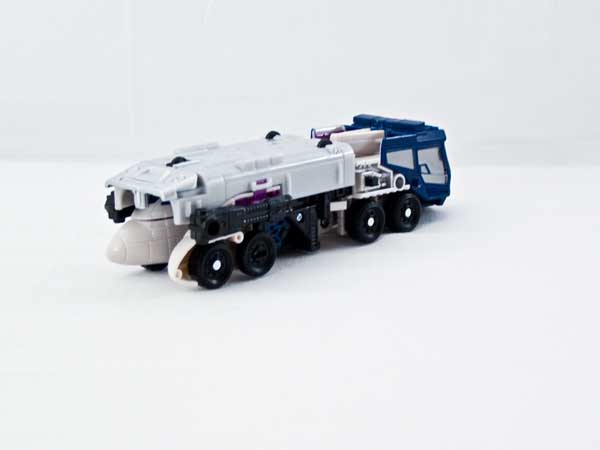 Octane's original tanker mode wasn't all that awe inspiring, and Tankor's isn't that much better. For one, the entire rear end is open, exposing the plane cockpit. You can also openly view the rear wing section of the plane mode directly behind the tanker cab. The section between the wheels is also a menagerie of various mode parts. Granted, this might have been a hard thing to pull off, but it still falls short.

Fortunately, transforming him from truck to robot mode is a bit easier. Start by removing the tanker top and the lasers. Split the truck cab apart, then extend out the legs. There is an eave on the top of the cab windows. Press on it to flip up his feet. Take the white piece at the back of (or behind) the legs and press down to form his waist. Fold the 2 plane cockpit halves to their original position, but twist the halves 180 degrees while doing so.

Take the top of the cockpit halves and fold them down 180 degrees to form his arms. Twist the nosecone 90 degrees inward to expose his hands. Stoop the ball joints down on the arm assembly to form his shoulders. Grab the folded up black piece and push up to expose the head. Fold the black pieces back to form his shield. All that's left is some adjustment to the wings and you're finished./p> 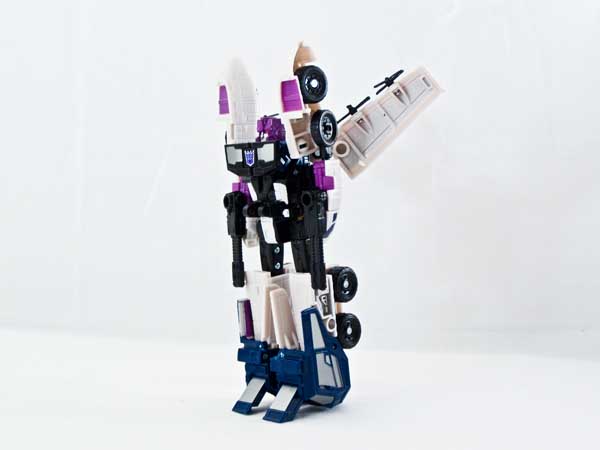 Where there might be some fail in the 2 alt modes, the robot mode more than makes up for it, especially comparing it to the G1 stablemate. The legs are blue toward the feet, white at the calves and black on the thighs. The torso is mostly black with some white accenting and the Decepticon insignia on the chest. The shoulders are white and purple, as are the forearms. The head sculpt is also done very well. Curious is that t looks like it is set up for blue piping, but the eyes are painted red. 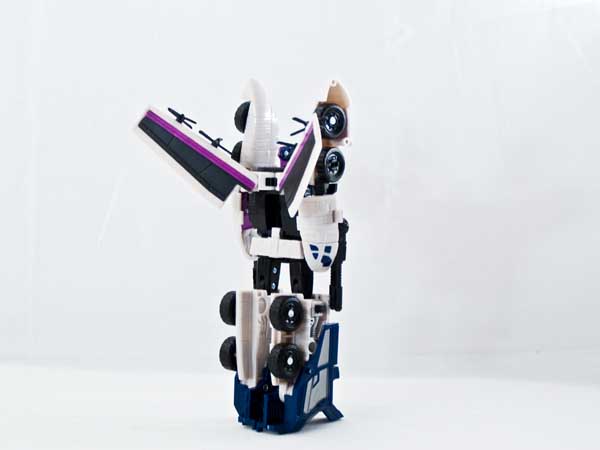 The two laser cannons fit in each hand. Or, if you prefer, you can stack the cannons on top of one another to form a quad laser. Looks silly to me, but it does give you space on the other hand for the other weapon. You can fit the tanker top on one hand using the peg within and treat it as a shield. Likewise, you can also split the tanker top in 2 and use it as the melee weapon listed on the box. The melee weapon is taller than Tankor himself, so it can be awkward to pose. 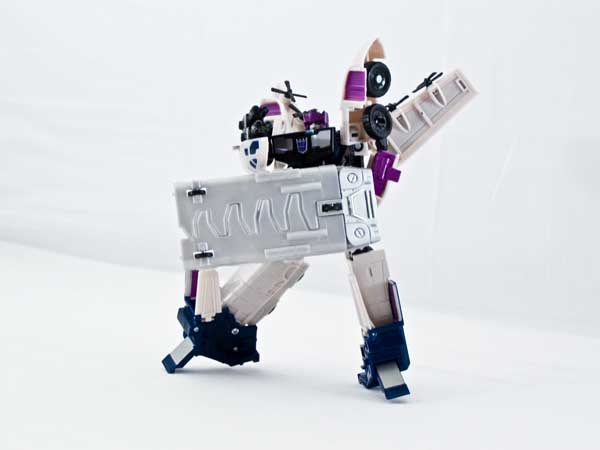 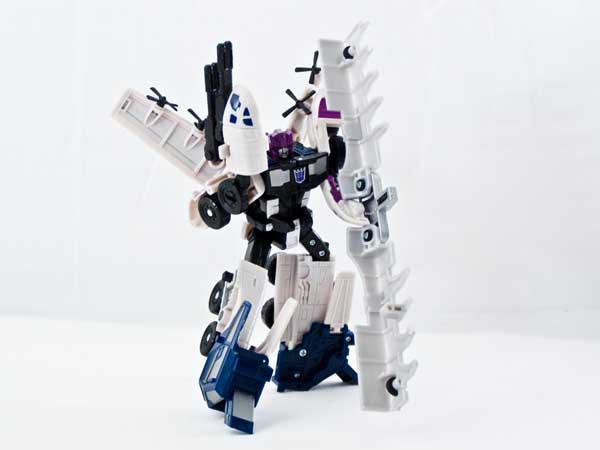 Due to kibble, posing can be limited. There are ways to "cheat" to get more posing out of him, but that compromises the aesthetics of the figure a bit. The shoulders suffer the worst being that the plane nose hangs over the top and can strike the wings.

:Suffers from some gaps in the bodywork, but overall a good design
Truck Mode -

: The transformations can be a bit muddled and there are some faults, but overall a decent Triplechanger to add to the ranks.
Size Class: Deluxe
MSRP: $10