Once in awhile, the TF fans are treated to an original mold character not included with the TV or movie continuum. While it's rumored that this character will have an appearance on Season 3, it has so far not been confirmed. Oil Slick brings another motorcycle alt mode into the line up. He is a Decepticon anarchist and chemist whose only goal is to disintegrate his enemies any way he can.

"Fear is my ally"

Vehicle to vehicle combat is something all Transformers are skilled in, but with Oil Slick, it's a particular specialty. He knows more about how to disable and destroy a vehicle than almost anyone else in the galaxy. He knows that if he can break down the robot inside, the vehicle will come to a screeching halt. Canisters attached to his sides dump special chemicals that unlock the deepest fears of any robot exposed to them, while at the same time rotting wheels and burning through axles. Once the vehicle mode is destroyed, Oil lick moves in close to finish off with his chain weapon. 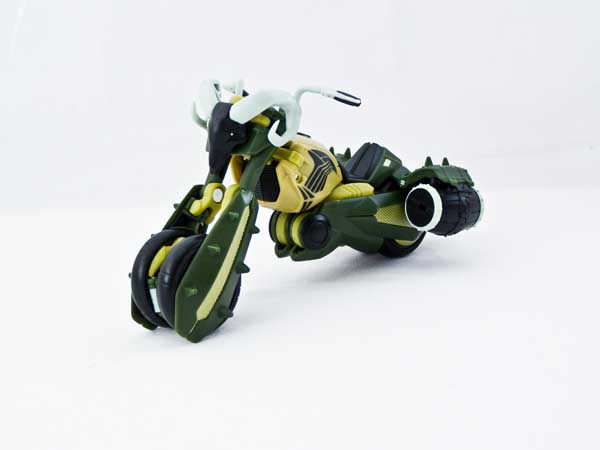 Oil Slick takes the form of a custom motorcycle. It's a wild design to say the least. The color scheme is a fluorescent yellow with green. You can also spot some black pinstriping on the fuselage. A ram's head is prominently displayed up front, with a headlight offset to the right. On either side of the rear sit a canister, which are removeable. 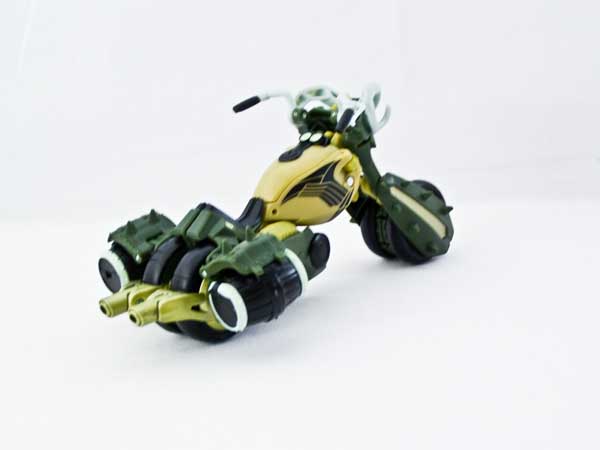 There is nice detailing for such an extravagant piece. You can make out the fuel filler cap and a pair of guages sitting on top of the fuselage. The handlebars are rubber and adjustable. The stitching on the wheel housings remind me of that old time cloth they used to use on speakers. Gives the bike a retro type look. While certainly weird looking, he goes especially well alongside Lockdown.

Transformation is simple with this figure. Start by dislodging the seat from teh fuselage then folding the legs down, then out a little. Split the forks on the front wheel. As you fold them out and back, you'll see a pin where they attach. The ram's head is on a swivel, move it to the left of the strut. With a finger, pry underneath the top of the fuselage and open the trap door so you can flip his head out. Inside the front wheels, you'll see his claws. Fold them out... then stop. 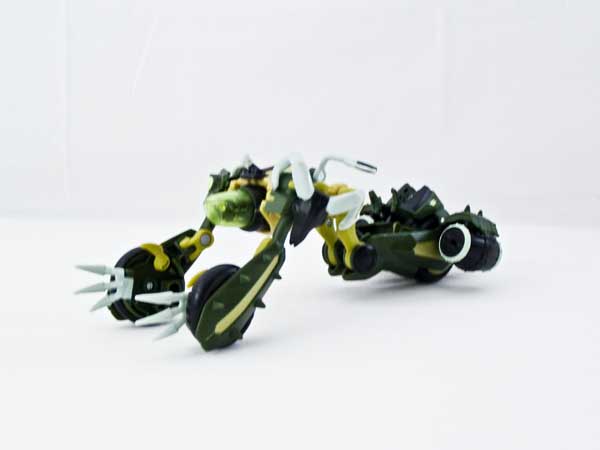 I say stop because this in-between mode is an official "Attack Vehicle" mode. Personally, I think it just looks goofy. I can see some people getting that GoBots Cy-Kill nostalgia over this mode, but it's forgettable at best. To finish transformation to robot mode, straighten out the limps and bend his exhaust pipes forward to form his feet. 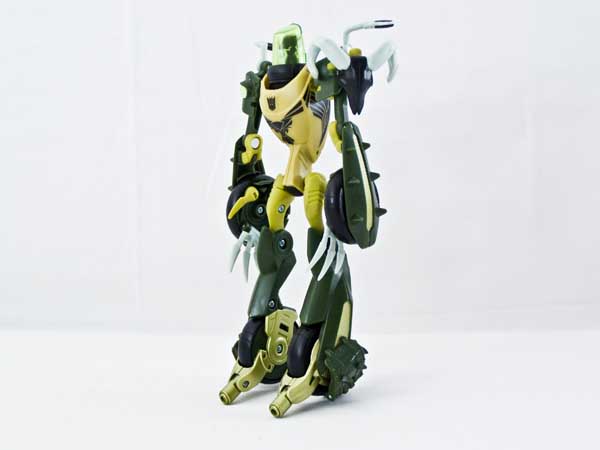 Whenever I look at this guy, I get flashbacks of Mr Freeze. Maybe it's because of his encapulated head. The head sculpt is nicely detailed and even features light piping through the eyes. The color scheme remains the same in Robot mode, with green on the limbs and the fluorescent yellow on the thighs and torso area. 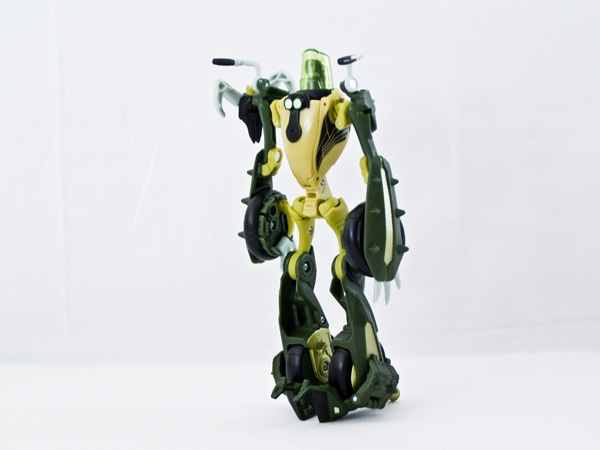 Earlier, I mentioned canisters on either side of his bike mode. These canisters each serve a purpose. One has a trap door where you can store water or maybe some small pebbles. The other extends out to form his chain weapon. The peg on the canister can fit into a hole within either of his hands. He's a bit goofy looking in robot mode, not to mention tall for a Deluxe, but he has merit. 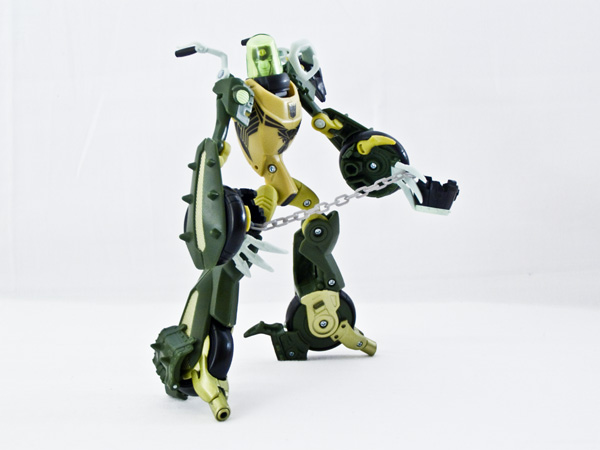 
Where this figure suffers is in articulation. There is no swiveling ability on the limbs, and the shoulders suffer from kibble restricting their movement..

: For a line that boasts superior articulation, this figure lacks. Overall -

: Better jointing would make this figure much better. That aside, he's still a worthy piece to any collection
Size Class: Deluxe
MSRP: $10