Dinobot love is in the air again. Animated so far has brought us three Dinobots. Earlier, we covered their leader, Grimlock. This time around we look at Snarl. Snarl has one simple thing in mind: Smash stuff.

One of the first robots brought to life on Earth by the power of the AllSpark, Snarl has a lot in common with the dinosaur whose form he takes in beast mode. He's almost impossible to hurt, first of all, and he really like smashing stuff with his tail, or ramming it with the horns on his head. He prefers his beast mode to his robot mode because he has more options for how to smash stuff as a triceratops. He doesn't take delight in random destruction the way some Decepticons do - he just really likes being strong, and breaking stuff seems like the best way to enjoy it. 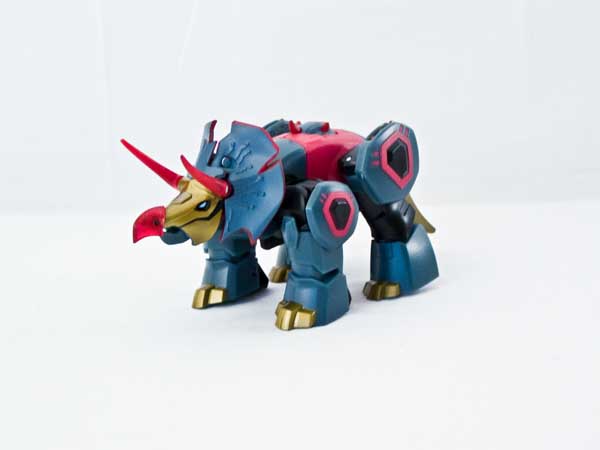 At first look, you want to call this guy Slag. Snarl, after all, was a completely different beast. However, this time around Snarl is a Triceratops. The color scheme is classic Dinobot, with a mostly gray body. Red is also abundant as is gold. Although the robot head is visible from the back of the beast, it's hidden enough so not to ruin the aesthetic. 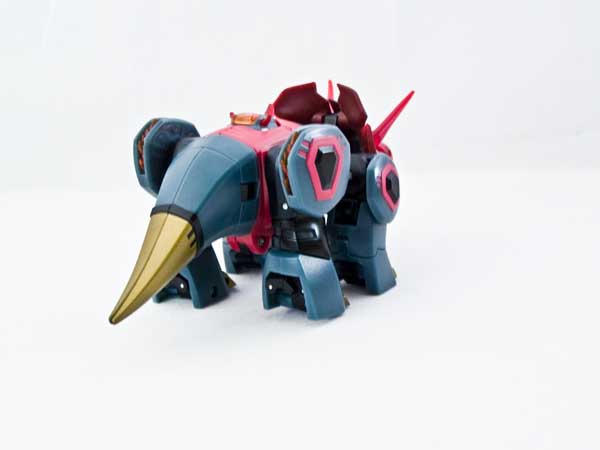 The beast mode has some articulation The jaw can open up quite a ways on the mouth. The rear legs can bend forward and back That's about the extent of it. You can get more movement, but it compromises the look and makes it look kibbled. Although articulation would be nice, overall it's hard NOT to like this guy.

Start the transformation by lifting up his head. There's a piece under his head that needs to joint out forward a bit. The front legs spread-eagle out to the sides, then fold down alongside each other. Grab his rear legs and pull them away from each other to expand his torso area. The legs can then be rotated down further. You'll notice a tab on this gray piece. It connects to the waist section.

His hands are located behind the rear feet. Flip them out and forward. Rotate the tail 180 degrees, then split it in 2. The plates on his shoulders flip out. Pushing a button behind the plates will eject the flame effects. To wrap things up, tuck the beast mode head into the chest and fold the horns back. 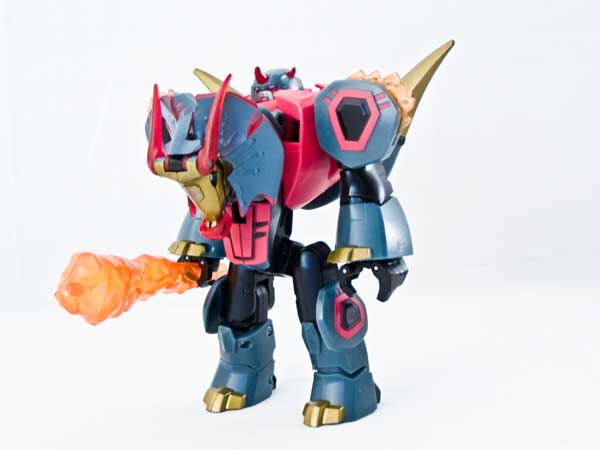 The robot mode comes off looking a little stumpy. The color changes are minor, with a little less gold showing and some more black coming into play. He has a translucent orange club that can be held in either hand. There is a tab to help keep the club in place, but I found it doesn't work as well as it does with Grimlock. The club, unlike Grimlock's sword, features no gimmick. 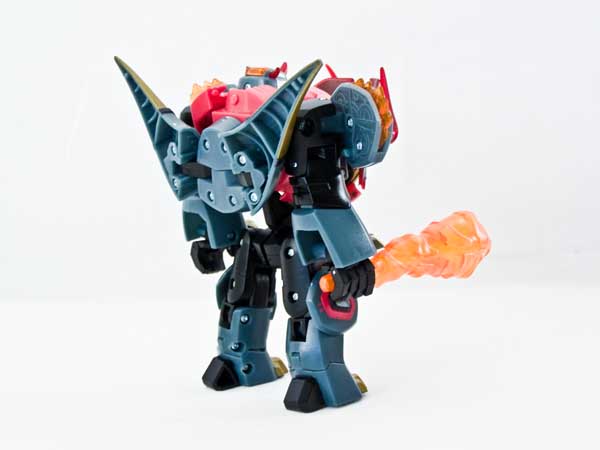 The head especially looks stumpy, but is show accurate. There is orange light piping in the back of the head. However, it's for the three horns on his skull, not for his eyes. Those are simply painted blue. You can rear up the beast mode head to form his "attack" mode. This has a good effect to it. . 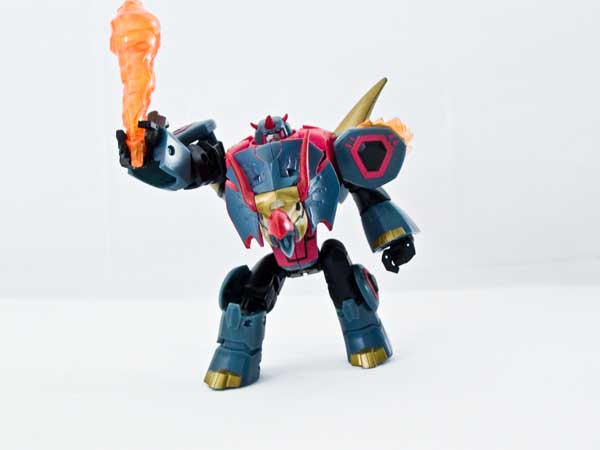 
The hips have amazing maneuverability, but are equally frustrating because they tend to separate in the middle. Beyond that, below average in the articulation department.

: Could have used some articulation to make this perfect
Robot Mode -

: The closest we've come to a brickformer in this line... hopefully the closest we'll get to one either
Size Class: Deluxe
MSRP: $10