One of the highlights of the show's first season was right at the end when Megatron regained use of his body. Ever since then, fans have been clamoring for the figure that represents his new form. After having to settle with the Cybertronian counterparts, fans can now rejoice that the Leader class Megatron is now circulating in stores... and it's the Earth mode!

Now that he has finally been able to build a body for himself, Megatron is more powerful than ever, and no force on earth can stand against him. He is a fighter without equal anywhere in the universe. Backed up by his Decepticon soldiers, he is also an expert battle leader, without peer. He is as ruthless as he is ambitious. Megatron will stop at nothing to gain the AllSpark, and destroy Optimus Prime and his Autobots. 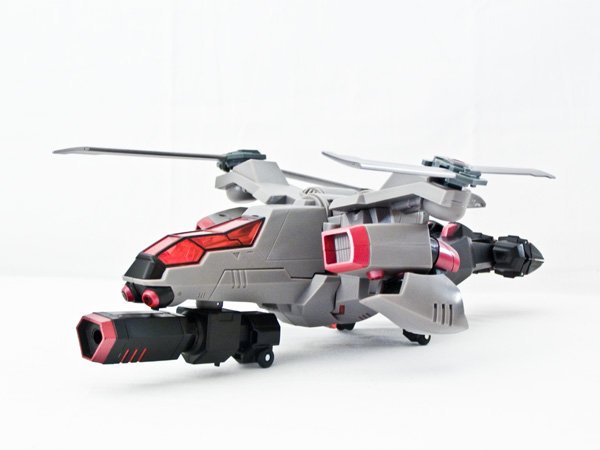 Megatron does share some similarities with his Cybertronian form. His Earthen twin rotor attack helicopter mode is basically the same type of VTOL vehicle as his previous form. The gray color scheme is also predominant, with red and black throughout. He also has retractable 3 point landing gear with working wheels. However, the similarities stop there. 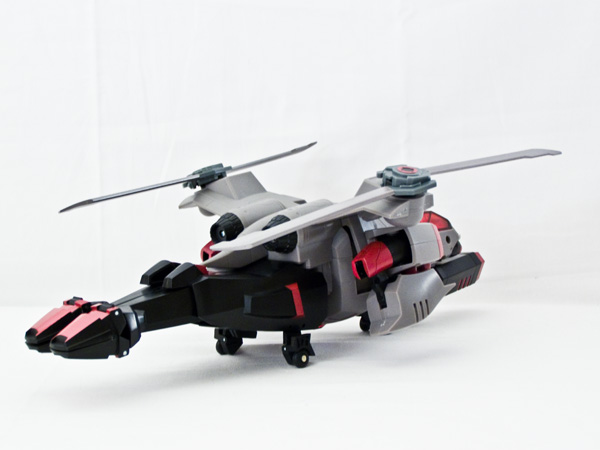 The twin rotors are on the same gear, so when one spins they both spin. His fusion cannon is now mounted up front below the nosecone instead of towards the rear. The cannon also features a launchable missile. You can spot twin exhaust turbines behind the rotor assembly. If that's not enough, he also has an electronic gimmick. Press the Decepticon insignia on the belly, and you will get a power up and power down sound, like his rotors are actually spinning. Better yet, it sounds more realistic than any electronic sounds in the past. One very interesting design quirk is with the front landing gear. The fusion cannon has a landing wheel on it, but take the cannon off and there is another retractable wheel. However, this will leave his chest and face exposed. Thanks to NLTAG at the forums for that head's up.

For a leader class, he is very simple to transform. Take off the cannon by prying at the bottom plate. It doesn't take much effort. Remove both rotors. Tilt the cockpit down, then slide it back on it's hinge. You will get a transform sound while doing this. Take the rear black assemblies and split them apart, then back. Rotate 180 degrees. Fold in the rear landing gear in a horseshoe like pattern. The tailfins separate to form his feet. After forming the feet, Spread the legs apart from their tab and lock the panels in place.

The arms pull down from under the intake vents. Lift up the tabs on his forearms so you can flip out his hands. Finish straightening out his arms and fold them to his side to complete the process. The rotors transform into his swords by spinning one of the blades 180 degrees. The blade that is supposed to flip is specific, but you can remember which one by noting which rotor sticks out behind the sword handle hinge. Once the blades are set right, flip out the handle 180 degrees. Finally, there is the cannon. The cannon can fit either arm by lining up the tabs in the cannon to the grooves on his forearms. 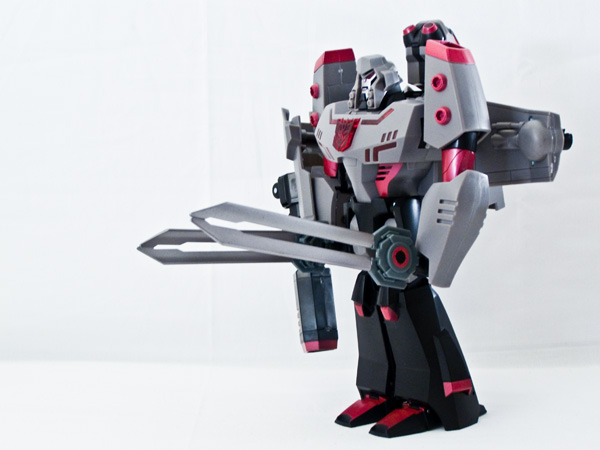 For anyone that seemed disappointed with the Deluxe or Voyager molds of Megatron, prepared to feel redeemed. This Leader mold is nothing short of brilliant. Show accuracy is virtually perfect. Although the eyes are not piped, the jeweling is enough to almost give you the impression that they are piped. If you can fault any one thing, perhaps it would be that he gives the impression of being slightly knock-kneed. 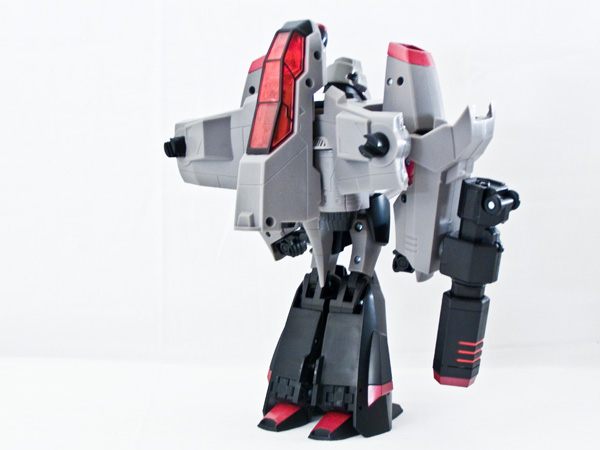 As mentioned earlier, the fusion cannon has a launchable missile. To launch it, press back on the cannon barrel, pull back on the cannon's back to cock it. Then pull the barrel forward to fire. The abdomen area houses his electronics, which allows him to utter three phrases. By pressing on his chest insignia, his mouth will move (based on the pressure applied to his insignia), his eyes will light up and he will say one of three things:.

1) Where is the AllSpark?
2) Crush the Autobots!
3) (Maniacal laughter)

Normally, for the voice effects it's generic sounding. Hasbro went all out by having Corey Burton's voice for the sound effects! 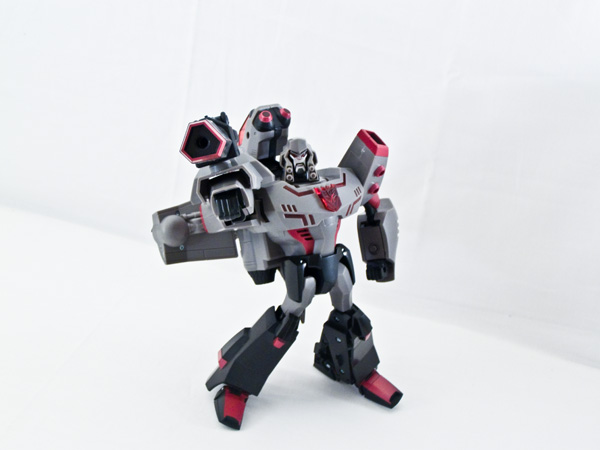 
The only suffering point is the shoulders, due to the combination of the intake ports forming his shoulder posts and the rotor assembly on his back. However, he is very well balanced. 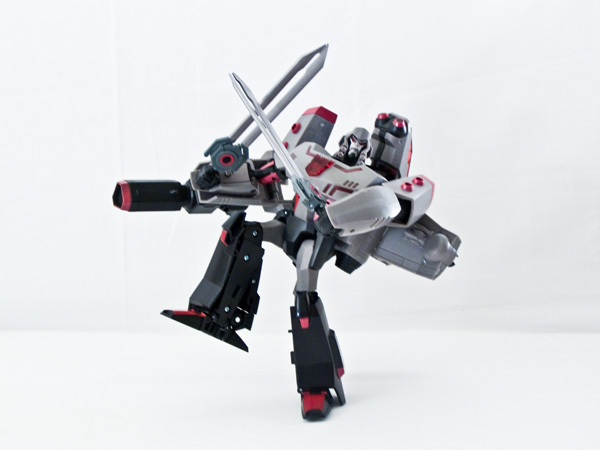 :Besides some slight shoulder articulation problems, nothing to complain about. Overall -

:This has to be one of the "must get" figures for anyone buying into the Animated franchise. Simple, yet packed with goodness!
Size Class: Leader
MSRP: $40