The last time we got to see Soundwave in action was when he was a Unicron herald for the Cybertron lineup. In that depiction, he was a space fighter with a bomb that became his droid. He tried to speak in hip music lingo, but altogether it felt so wrong. Animated has another go at the famous Decepticon, and this review will cover the figure it's based on.

"You Ain't Heard Nothin' Yet!"

Soundwave has only been around for a little while, but he knows that if there's one thing he loves, it's noise! Sound is like clay that he sculpts to his purpose. The more noise there is around him, the more elaborate he can get in how he uses it. He can imitate voices, make humans fall asleep, and even take control of simple robots with sound. He hopes the Autobots are ready because he's about to rock them harder than they've ever been rocked before. 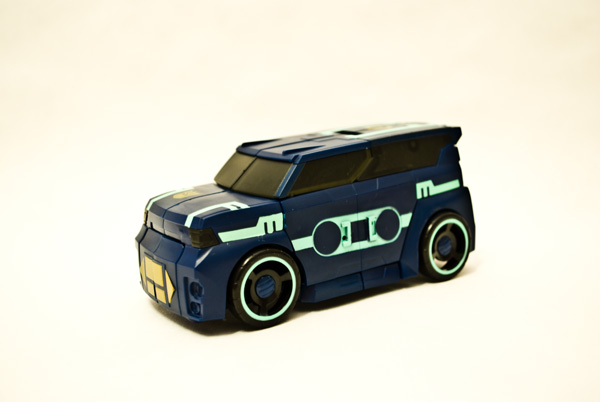 Looking at this figure in alt mode would make one wonder why they didn't give the Scion Xb this treatment for Alternators. Although Soundwave is a crossover vehicle, the music influences and the G1 tributes are all over. He is primarily a dark blue in color. There are teal and gold accents almost everywhere. A Decepticon insignia is posted on the right side of the hood. The lower front grille resembles controls for a music player. The sides are made out to look like sprockets for a cassette tape. And the roof features a power button. 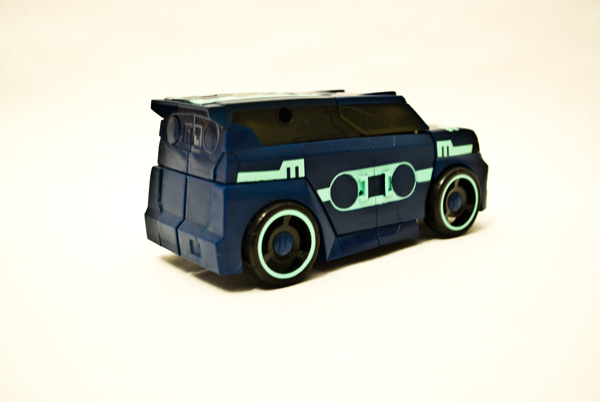 The rear end also has a bar equilizer molded into it. However, there is no paint. Why they wouldn't have given the attention to the rear that they gave everywhere else is beyond me. He also comes with a rather large guitar that clips onto his roof. This guitar is his ever-faithful servant, Laserbeak.

Laserbeak has the alt form of a rather stylish electric guitar. The guitar is black with red on the head and body. Two large knobs are molded into either side of the body. It's nicely detailed with 6 strings showing, all the adjustment knobs and stringers. To transform into bird mode, pull the 2 body halves apart to form the wings, then slide the guitar head down the neck to form his tail.

Laserbeak makes a nice bird with this mold as well. The 2 clips on the bottom serve decent as feet, but the tail is too heavy to make him stand upright. There is no detail on the head, which is a minor letdown. Overall, a simple yet very effective accessory. Now, on to transforming his master.

This transformation, while not overly complex, is still involved for a deluxe. Tip the hood down slightly to dislodge the roof panels. Spread the rear quarterpanels apart, then forward. Separate his hood, then fold the lower grille halves down and around. This will allow you to flip the hood pieces around a full 180 degrees to form the legs. Fold the windscreen back to form the feet. Spin the calves around 180 degrees, then swivel the waist 180 degrees to complete the lower half.

The chest can be tricky at first. First, fold up the lower half covering the waist to form his chest. Now, there is a tight double-hinge behind the chest panel. Tilt the top of the chest forward, then slowly pull the bottom half up and around until it locks in place. The rear wheels fold in 90 degrees into his chest. Pull the arm panels down, spin the door panels back and flip down his hands. Lastly, flip down his head. You may need a dull object for this. 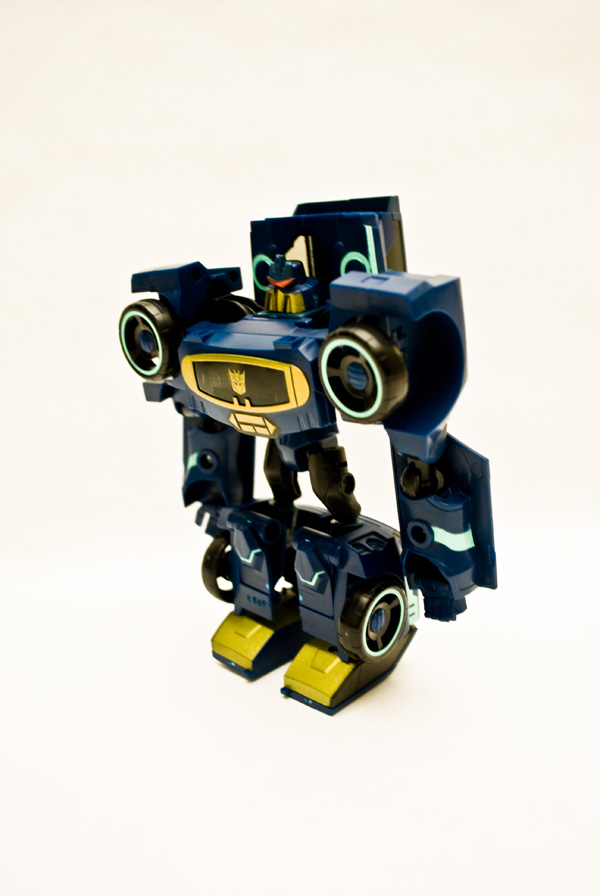 The robot mode is pretty close to the Animated version. The dark blue color remains, as do the gold and teal accents. His chest is reminiscent of G1 Soundwave's, with the chest door and the controls. The head sculpt is dead on to the show's, but no light piping. 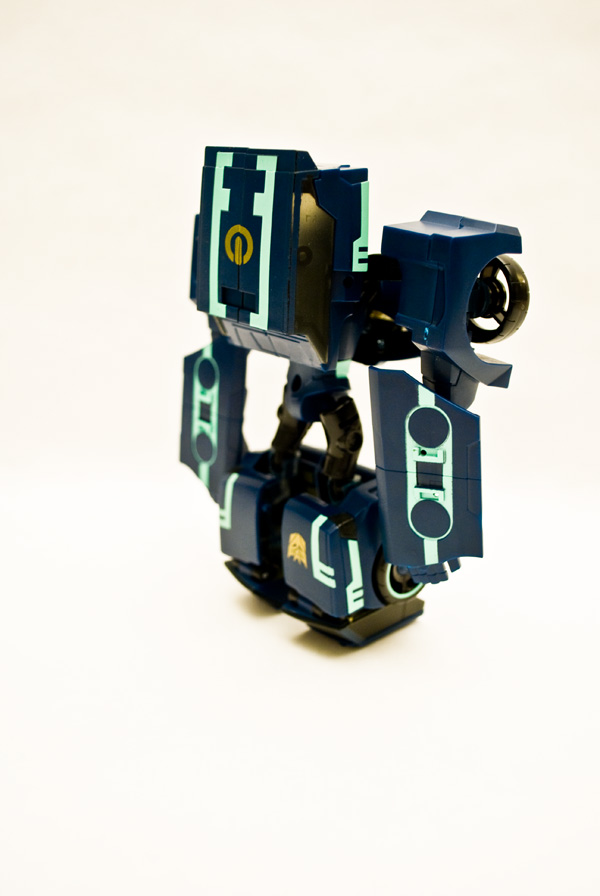 The weakest point is probably the hands. They just kinda lie there flat. Molded fists would have gone better with this. Laserbeak can clip onto either of his arms via tabs on the back of his forearms, where the door panels are. Because of the tail weight on Laserbeak, it's difficult to get a shoulder perch. You can also have Soundwave "hold" the guitar mode, although it's loose fitting. 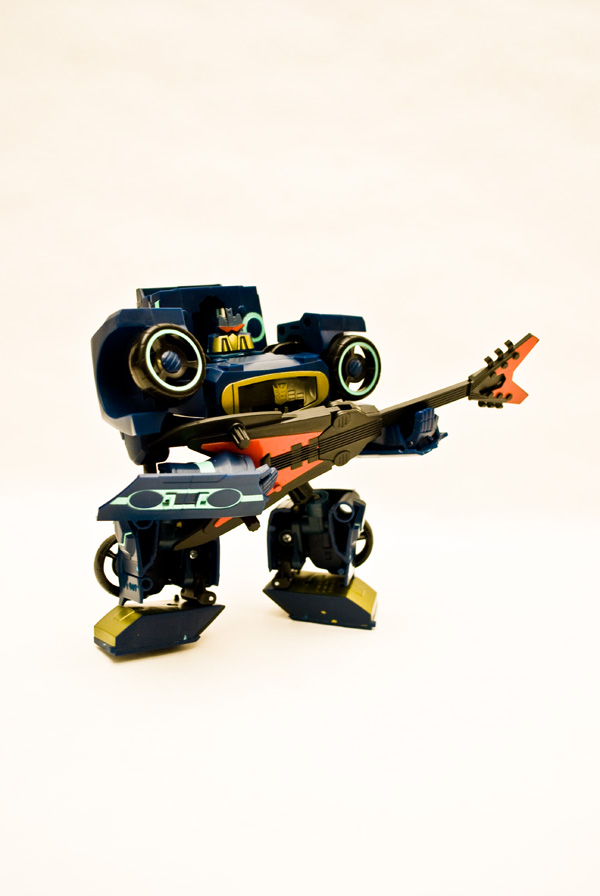 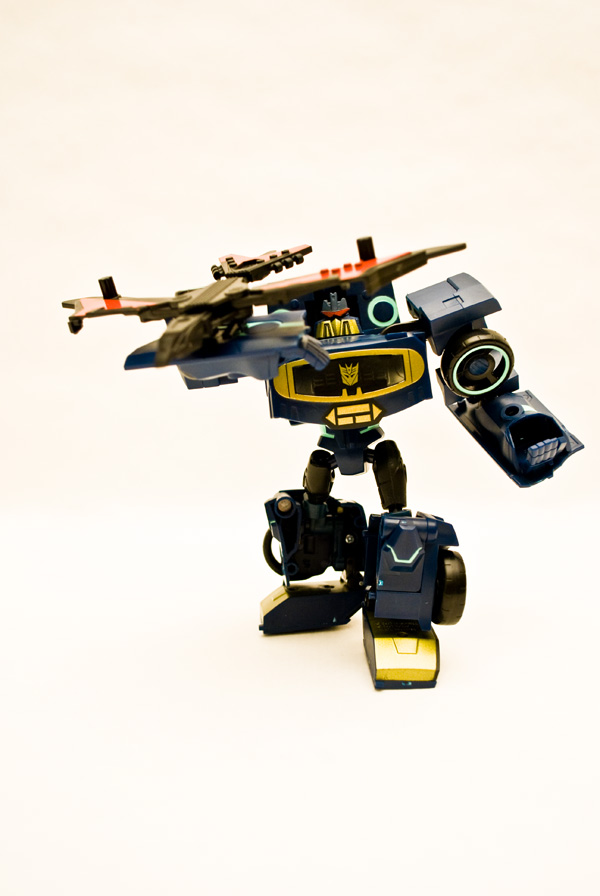 The shoulders are definitely the weak link. Due to their design, there is almost no way of getting any spread movement from them short of folding up the head. That's a shame, because the remainder of the joints are set up rather well.

: Close enough to a G1 tribute while still being tasteful and modern.
Robot Mode -

: Shoulder articulation and hand design is a turnoff, but Laserbeak salvages some of this Overall -

: So close to perfection, but still a must have for the Animated collection.
Size Class: Deluxe
MSRP: $10