When the 6" Titanium line came out in 2006, there were alot of high hopes. Those hopes faded after a combination of poor character choices and unbalanced weight led to a mostly lukewarm audience. Although there were a few diamonds in the rough, a majority of fans were left unimpressed. This may have ultimately led Hasbro to pull the plug. However, those who collected the figures are getting a small reprieve, as 3 more heavily requested figures make their way to the public. The first one is an exclusive from the SDCC. Skywarp is the fourth use of the War Within seeker jet mold, following Starscream, Thundercracker and Sunstorm.

“Out of sight, out of mind.” Those are the words Skywarp lives by, even though he doesn't necessarily know it himself. When Megatron is around, he's the most loyal of Decepticons, always standing rigidly at attention, acquiescing to every order given. Unfortunately, as soon as his commander walks out of the room, all thought of orders, protocol and practicality go with him. It's not that Skywarp has a problem with authority. He just doesn't care is all. He'd rather be strafing unarmed noncombatants than engaging in risky missions.

The only thing that bugs him more than having to follow orders is having to work alongside guys with a lot of personal motivations. Guys like Starscream. When he isn't going on and on about how much better a commander he is than Megatron, he's forcing Skywarp into some new scheme to replace the big guy. Megatron is winning the war for the Decepticons. What can't Starscream just shut up and enjoy the ride?

Can teleport himself and others several miles 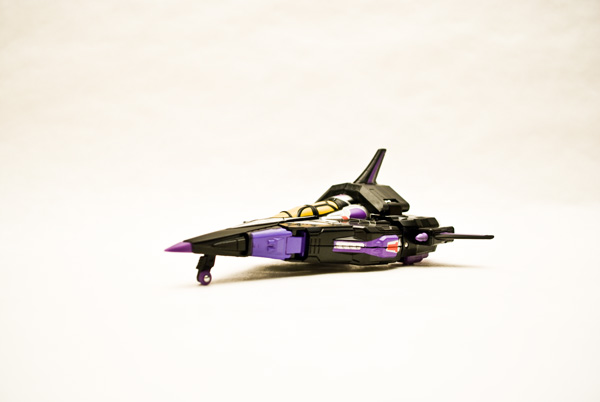 Skywarp uses the Delta Seeker design from the War Within comic series put out by the now defunct Dreamwave. While true to his G1 color scheme, he is an explosion of different colors. Black is his primary color, but there is also plenty of silver, lavender and even some red to go around. The cockpit is colored yellow. Interesting to note are his wings, which are striped like his eventual F-15 jet mode. There is a Decepticon insignia behind the cockpit.

He has the 2 landing wheels on the rear, with the retractable nose wheel. While an excellent design, it has one glaring problem. The entire rear end is open, clearly exposing the head. The fists are also visible. Then again, most of the Titaniums were notable for exposed parts. However, he sports the best paint job out of the other three Seekers.

Transformation is exactly identical to the other Seekers. Pull the sides away from the cockpit, then swing the nosecone until it locks with a peg on the belly. Flip out the feet, pull the legs down then swivel the calves 90 degrees in to finish the legs. Split the tailwing and fold each half back against his shoulders. Flip the arms out from underneath. Finally, pull the shoulders down until they lock against his chest. 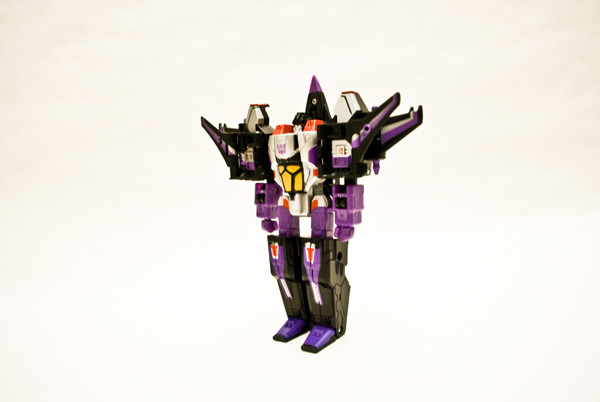 Skywarp is identical in design in robot mode in regards to the other Seekers. Even the headsculpt remains unchanged. A little more red shows up along the shoulders and hips. However, unlike some of the other Seekers, the details are painted in rather well. 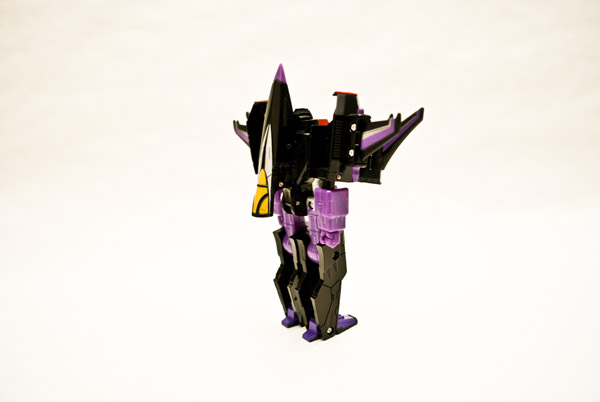 Again, Skywarp comes out looking the best of the other seekers. Whereas some of the others had faults (Starscream's unpainted head, Thundercracker's untreated helmet), Skywarp seems to have all the details down packed. He also retains his palate of coloration. 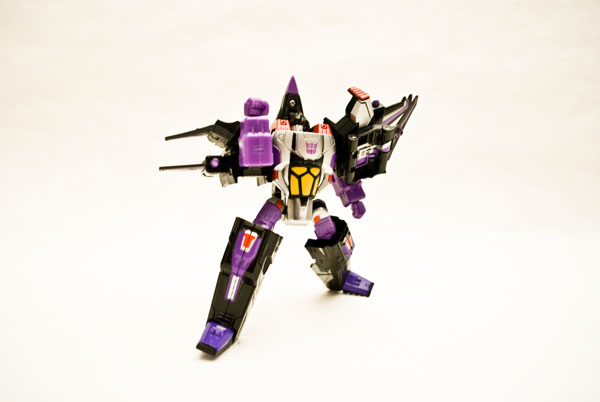 
The shoulders are the real dud, with no wingspan whatsoever. Beyond that, all the joints are impressively tight and some good poses can be pulled off.

:The paintjob puts this one near the top, even with the bare back end.
Robot Mode -

: Again, the paint job bumps up the score, plus the joints are tight! Overall -

: Still available at Hasbro Toy Shop, definitely an add to your existing Seeker collection. Even if you don't have the others, this one is good enough to keep on it's own.
MSRP: $20