In the first version of the Classics lineup, we had 3 classes of figures: Legend, Deluxe and Voyager. For version 2, Hasbro is sizing things up a bit by going with Ultra class figures instead of Voyagers. With the Ultra class normally comes electronic gizmotry. This is normally a bad thing to the collectors, but the leader classes in the Cybertron lineup showed that there CAN be good electronics. Will the same be said for the Ultra classes? This review looks at the first of 3 currently released Ultras, Powerglide, one of the few airborne Autobots who substitutes strength with agility.

Not as fast or powerful as the Decepticon fliers, Powerglide relies instead on his raw skill as a combat pilot. Where he enemies rely on afterburners and advanced weapon systems, he executes loops, flats spins, and other aerial maneuvers that make even the craziest and most foolhardy Decepticons backfire out of fear. In a sky full of bad guys, you can always easily spot Powerglide twisting and diving through enemy fire, dodging missiles, and generally outclassing even the best among the Decepticon air warriors. 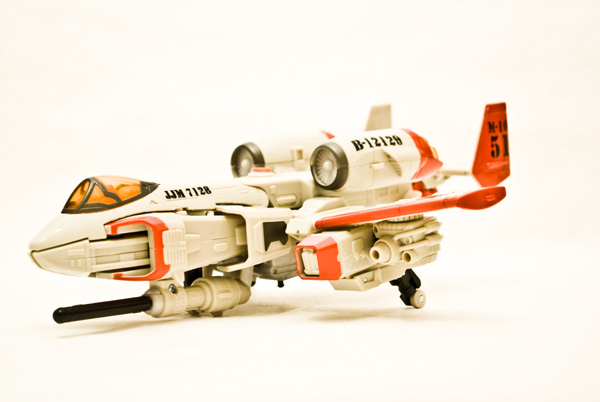 Powerglide has bulked up quite a bit from his days as a minibot. In fact, he's the largest of the line from either Classics 1.0 or (currently) 2.0. He retains his alt mode based off the A10 Warthog, which Hasbro likes to use so much. The plane is primarily white, with red accents throughout. He has a bulbous orange cockpit up front and below the cockpit sits an offset gatling gun. The gatling gun serves 2 purposes. By taking it off it's peg and turning it around, you can expose a launchable missile. The only problem with this is with the chest kibble. You can get the gatling gun to line up right, but in missile position the barrel of the gun is blocked by the kibble. In short, the missile will always point off center. 3pt retractable landing gear can be found on Powerglide, but with the gun on the nose the front wheel is almost for show. 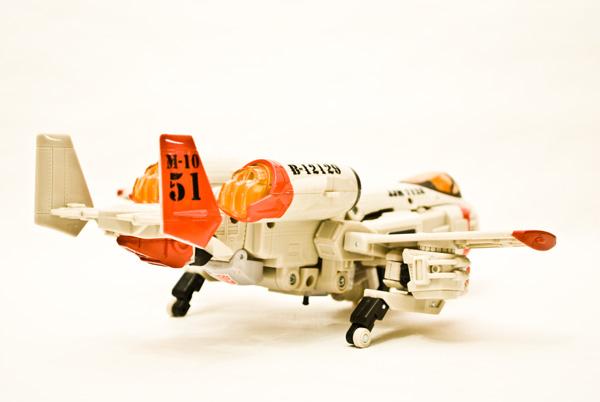 In various spots, Powerglide has markings. On the tips of the wings, there is a winged Autobot outline with "9G" inscribed. Directly behind the cockpit are the characters "JJM 7128". On the engines, you'll find "B-12129". Finally, on the tailfins are the characters "M-10" and below that a larger "51". If someone knows the significance to any of these inscribes, please educate. I couldn't find anything. Powerglide has 3 distinct electronic sounds that play in a loop. You can activate them with a red button located behind the cockpit. One is a turbine warmup, one is a flyby sound and the other is machine gun fire. The cockpit and rear of the engines blink with a red LED no matter which sound is playing.

Powerglide can be quite interesting to get into robot mode. After retracting his landing gear and removing his nose gun, fold the tailfins down so there are laying horizontal, then fold the entire tailwing assembly up against the back of the plane. Grab the bottom of the nose and pull down away from the cockpit. Fold the tail of the plane up against the top, then continue folding back the bottom half of the plane. You'll hear a transform sound in the process. There is a black peg on the bottom that locks into a hole. Once that peg is in place, fold the main wings down. Pull the nose forward to extend the legs, fold the legs down then rotate the waist 180 degrees. You can then twist the calves 90 degrees inward and flip down the nose halves which become the feet.

Directly above the waist is a small hinged panel. This can be folded up and locked in place. The same goes for the Autobot shielded panel that is above the engines, except that folds down. Rotate the entire main wing assembly upwards and back, noting that the hinge is kinda stiff. Find the indent on each wing. This connects to a rectangular peg towards the back of the engine. To get the alignment right, make sure the intake vent on the wing is flushed under the rear of the engine. Straighten out the arms, then push down on the landing gear assembly to expose his hands. Flip down the cockpit so it's against his back. Pull the head up from the tailwing assembly, rotate it forward and consider the transformation done. 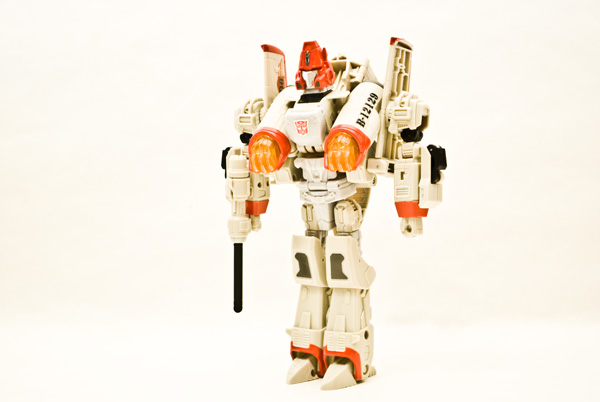 It's interesting just how much G1 likeness was carried over to the bot mode. Although the color scheme does't change besides some bronze apps on the knees, you can still get a Powerglide feel. The wings fold up against the sides of the chest, and the head sculpt is dead on. Some light piping would have been nice, though. The piping was supplanted by the electronic gimmick. By pushing behind his head, you will get only the machine gun sound. His eyes and chest will light up. Leaving the button depressed will play the sound and light show infinitely. With the engines lying diagonal as part of his chest, you get a buffed feel from him. Okay, maybe he could have spent some time on the arms which are pretty thin. The nose gun fits into either hand and can be used either as the gatling gun or the missile launcher. 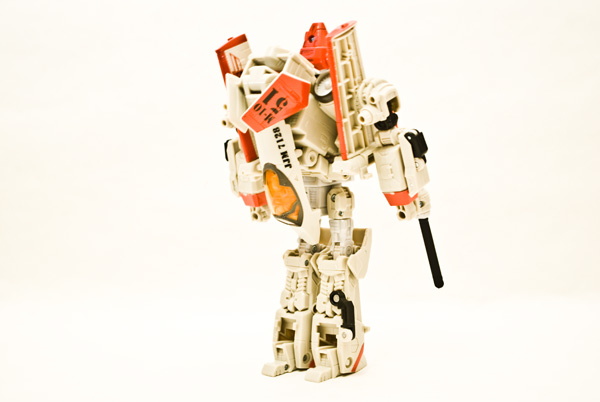 One place the bot mode fails is in paint. There are a lot of details molded into the figure. In fact, if you lift his chest panel up you'll see a heart. This references the G1 episode of "The Girl Who Loved Powerglide". However, the heart (like most other molded details) is not painted by white like the plastic. More paint apps would have brought out more clarity in the figure and drew attention away from the huge, orange engines on the chest as well as the bright red head. Sadly, what paint IS on the figure wasn't applied carefully. There are several instances of smearing and overspray on this figure. The infamous QC strikes again! 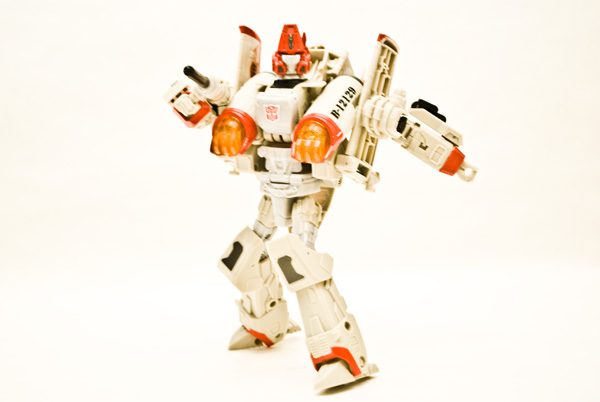 
The hips can actually bend back more, but the cockpit gets in the way. Overall, poseability is very good.

:A little quirky, but a nice jet nonetheless
Robot Mode -

:A little messy to look at, but still a solid design. Needs more paint! Overall -

: Might have been a better Voyager. The "perks" of being an Ultra don't add up here.
Size Class: Ultra
MSRP: $25