When Onslaught was announced as one of the first Universe figures to get Ultra class treatment, excitement spread as hopes for a combiner flared up. Sadly, this does not look to be the case. Thought Onslaught retains some of this character, for the most part he is a solitary unit. This review looks at the Decepticon strategist.

If Onslaught enters into direct combat, it's only because something has gone wrong with his battle plan. He prefers to remain on the sidelines of a fight, directing the action and revising his tactics second by second. Nothing gives him more joy as much as a well-executed ambush, or the swift, organized destruction of an Autobot base. When he must get involved in a fight himself, he does so with cold fury, advancing meticulously across the battlefield with his fire focused on the most dangerous opponent. Every variable in a fight is taken into account in his mind, every possibility assessed, and every contingency planned for. 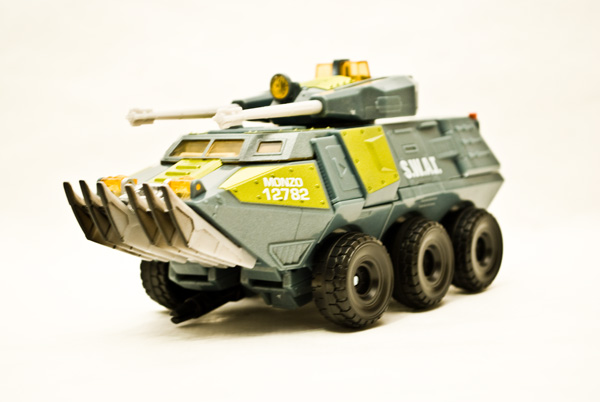 Onslaught has been given the alt mode of a personal armored carrier. The paint scheme is a gunmetal blue with various spots of pea green. The front would be the only exception, where a pair of gray claws sit. These claws can lower to from a scooping weapon. S.W.A.T. appear on each side of the carrier, as well as on the shield. All 6 wheels are rollers. There is also a 2 barrel cannon mounted on a turret above the cockpit. The turret can rotate 180 degrees (left side to right side), but the turret and the cannons do not pivot. The shield can attach to the tab by placing the hole on the shield into the lightbar, with the S.W.A.T. facing the front. 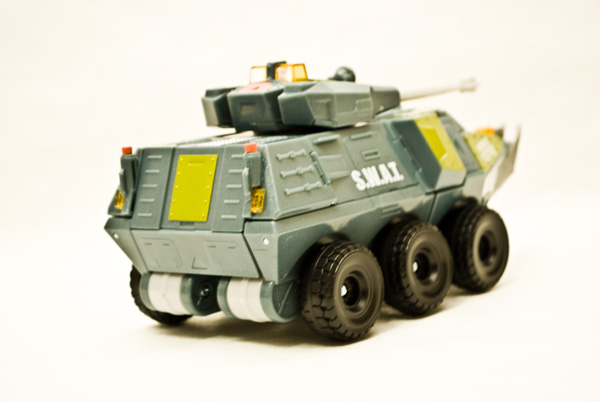 The level of detail is fantastic. The amber translucent headlights can fold back when not in use. There is also a translucent amber spotlight above the cockpit. You can make out a winch behind the claws on the front end. One interesting note is the scripting of MONZO 12782 on the front quarterpanels. What this means... I don't know. Like any other Ultra, Onslaught comes with electronic noise. Pushing the red button on the rear of the turret will give one of two sounds. The first is machine gun fire (like Powerglide). Holding the button down will stream the effect continuously. The clear panels behind the turrets will also blink. Pushing it again will get you a siren whelp and a flicker of the lightbar on the turret. This will NOT continue by holding down the button. To me, that's just silly. There is another secret. The middle wheel on the right side is cammed. Rolling it will give you some kind of crashing noise. It only works rolling forward.

Start by pulling the side panels out slightly. Lift the rear hatch up, Fold the lower half of the hatch into the upper hatch, then slide the hatch assembly forward. Rotate the side assemblies down and around to form the legs. Spread the legs apart a little bit. There is a gray assembly on a hinge. Pull it back a little, then fold the rearmost wheel into that space. You can then put the gray cage back in it's place. Pull the rearward panels out (by the knees) slightly, then fold the side panels in to form his shins. Flip up the green panels to form his feet. Folding in the gray tabs is optional.

Pull the lower half of the front end away in half, and rotate it 90 degrees rearward while pulling it to the side. Twist the shoulder joints 90 degrees so that the claws face rearward. Pull the arms out slightly, then pull the cockpit down. Note that the nose of the front end clips into the abdomen area. Flip out his hands, pull the arms down to his sides and flip the blue panel behind his head to the back to finish the process. As for the shield, there is a tab just below the left elbow. Flip it back, and the shield will clip into that tab. 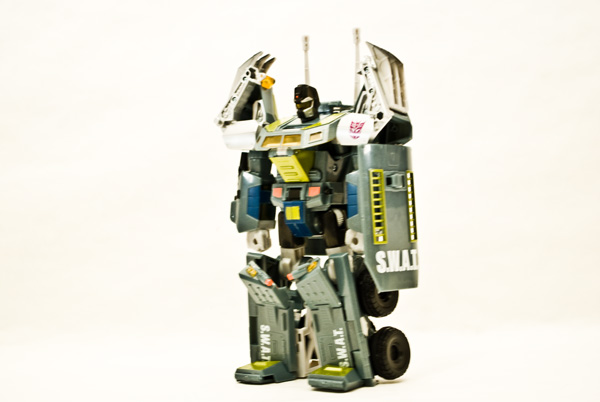 Onslaught may not be a missile transport anymore, but he still retains alot of his G1 likeness. Except for a couple of patches of red, he retains his gunmetal blue and pea green motif. The 2 barrels from the turret stick up from the back, complimenting his dead-on G1 inspired head sculpt. A large Decepticon insignia appears on his left shoulder. Pressing the button on the turret will light up his visor, but there are no new sounds. You either get the short whelp of the siren or the continuous ringing of machine gun fire. 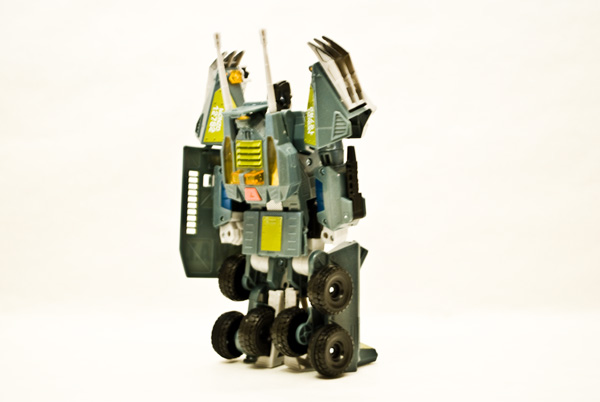 One nicety that is new on the robot mode is on his right arm. Pressing a switch on his forearm will flip out a arm mounted cannon. Combined with his arm mounted shield, he has a good combat setup. The only thing that would have put this over the top is if the turret could pivot forward over the shoulders. At least the paint quality on this mold is alot better than Powerglide's. 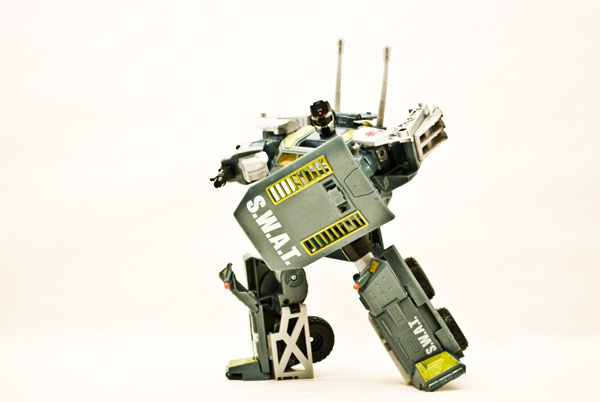 
Shoulder articulation is hindered if the shield is on the left arm or if the gun in the right arm is folded in. Beyond that, lots of poseability is possible.

:Lots of great details and a solid alt mode blurred only by lackluster electronics
Robot Mode -

:A bot with perfect proportions and near perfect articulation. Overall -