Hasbro is quickly coming upon their 25th Anniversary of selling Transformers in the United States. While there will be a whole 25th Anniversary lineup coming soon, the Universe line is giving us a sneak peek at what to expect. This sneak peek is with Silverbolt, the leader of the Aerialbots who is a sleek jet with the ironic fear of heights.

As the leader of an elite group of Autobot warriors known as the Aerialbots, Silverbolt shoulders a great deal of responsibility. He is a careful planner wo never risks the lives of any of his men, unless it is absolutely necessary. All his care, however, hides a deeply insecure nature. Optimus Prime actually put Silverbolt in such a stressful position largely to distract him from his paralyzing fear of heights; a weakness he hopes the other Aerialbots never discover. He is a capable leader nonetheless, and has honed the Aerialbots into one of the finest Autobots units in the universe. 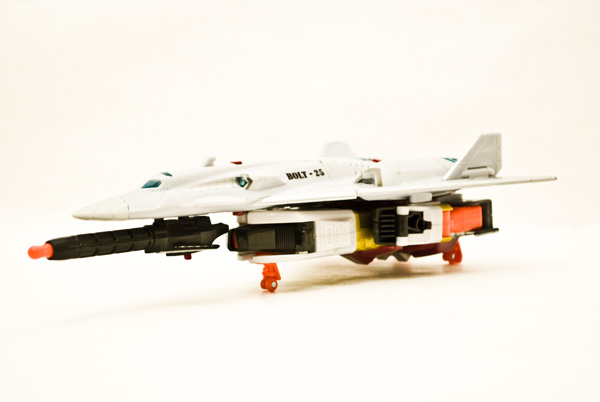 Silverbolt has ditched his Concorde inspired alt mode from his G1 days and instead taken an altered form of an SR-71 Blackbird. He is mostly PVC gray with turquoise, bright orange and black accents about. Each wing is marked with a winged Autobot silhouette with the number "25" in the shield. You can also find "Bolt-25" marked on the middle just behind the cockpit. Both these scripts recognize the 25th anniversary of the Transformers line. Silverbolt's gun attaches to a peg below the cockpit and fires a launchable missile. There is 3pt retractable landing gear colored in bright orange. 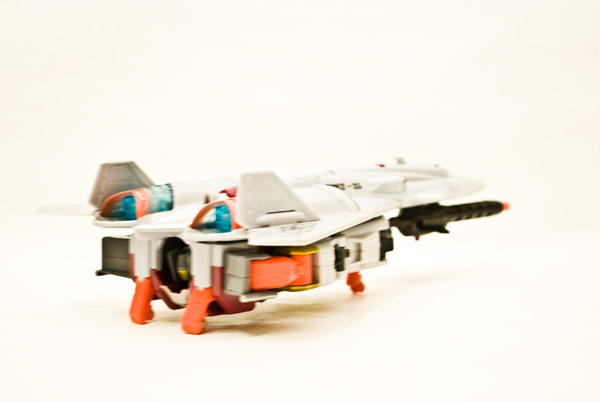 As with the other Ultras, Silverbolt has sound effects. The downer is that these sound effects are EXACTLY the same as Powerglides, even played in the same looped order. To make up for this, the light show is staggered. The machine fire effect gives you green blinking LEDs at the vulcan turrets behind the cockpit. The flyby effect offers no lights, but the turbine warmup will give an orange blink at the engine ports. The major problem with this mold is that the robot body is literally tacked on to the belly of the plane. They do try to minimize the visual effect, but they don't go far enough in my opinion. Some have said it's faithful to the G1 design, but I think they did a better job of concealing the robot mode in the G1 mold 22yrs ago.

Don't blink, or you'll miss this process. After removing his gun, pull the nose back and fold it up against the rear, catching the hook on the top to the port. Pull the arms off their catch, flip the intake ports around to expose his arms and rotate the arms 90 degrees inward. Pull the legs apart, extend them in a 180 degree half moon, flip out the feet and turn the knees in 90 degrees. Push the legs up into the waist to expose the head. As you do this, you get a transform sound and Silverbolt's eyes light up in green. Time for a sandwich. 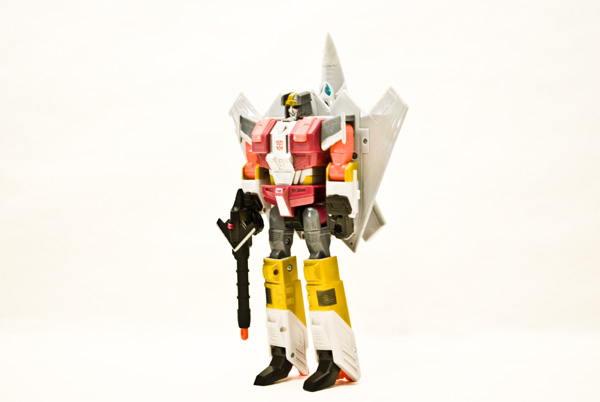 I dare say this is the most faithful G1 inspired robot mode out of almost any of the Classics/Universe figures. Silverbolt explodes in a menagerie of colors, including gold on the knees and shins, bright orange and gold on the arms, and magenta on the chest. You can find an Autobot insignia on the chest. His gun fits into either hand and is also a faithful G1 remake. 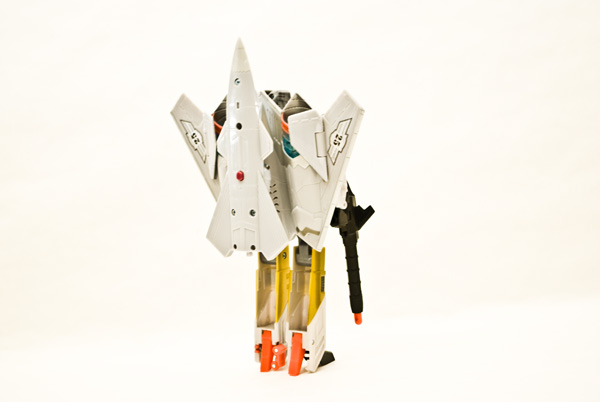 There is a button extender so you can use the electronic gimmick, but all you get in robot mode is machine fire with no lights. Also, the extender button doesn't extend enough to activate the sound. 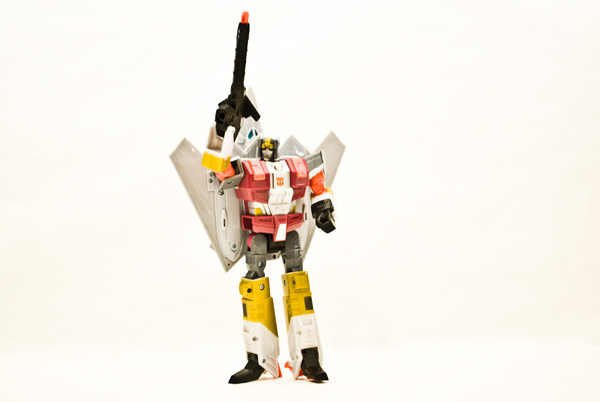 
Although the jet backpack interferes with motion a little, he is actually very poseable. With the landing gear on his right foot, though, it can be tricky to keep an angled leg pose as it tends to slide if not balanced just right.

:Nice jet mode, if not for the folded up robot belly.
Robot Mode -

: Again, another mold that should have been a Voyager. Heck, even a Deluxe. Some eye pleasing paint apps might have made this better.
Size Class: Ultra
MSRP: $25