For far too long, Galvatron has always been associated with a repaint of Megatron. Megatron gets owned, gets repowered, gets a new paintjob and BAM! Galvatron is born. Universe is now bucking this trend by offering an original mold of Galvatron that seemingly has no link to Megatron at all. This review will stack up how well Galvatron does without stealing Megatron's threads.

Arrogant, powerful and ruthless, Galvatron has emerged to seize control of the scattered Decepticon forces. He has formed what was once a loose confederation of assassins and warlords and turned it into an army capable of threatening the entire Universe. Rumors abound, but no one know where he came from; they know only that he arrived, and swiftly crushed all opposition to his rule. Some Decepticons hope another leader powerful enough to challenge him will emerge, but most are too afraid of him to even hope for someone beter. 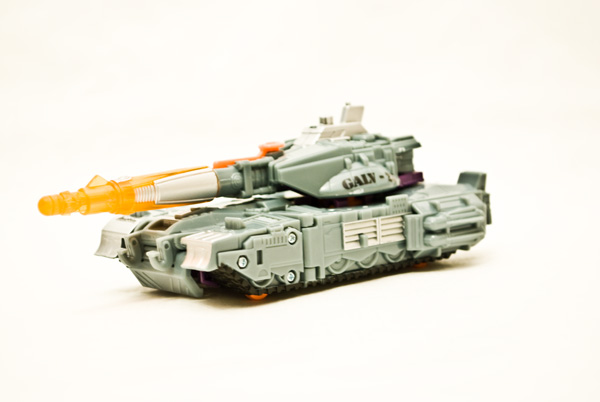 Galvatron dons the disguise of a tank for Universe. The color is mostly PVC gray with some silver accents throughout. The only other noticeable color is the orange that makes up his turret cannon. It's done in a translucent orange to invoke the style of the cannon that the G1 namesake had. It's pretty styling for a tank cannon. You can also catch "GALV-25" scripted on the turret, in honor of the upcoming 25th anniversary of the Transformers line in the US. 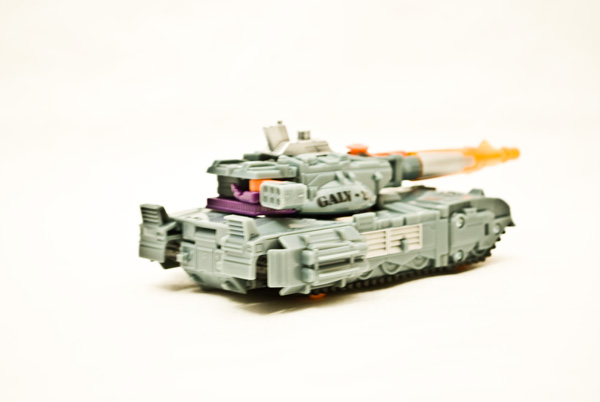 The turret can rotate a full 360 degrees. Sadly, the cannon itself can not pivot. There is, however, a launchable missile colored the same as the cannon. You can also catch a 6 bay missile launcher on the right side of the tank towards the rear. There are 4 plastic wheels that help roll the figure along. The only thing that could have made this alt mode better is paint apps. There's just too much gray that makes it look drab.

Hope you have some time, this one's a doozy. Pull the panel attached behind the turret out until it's lined up to the left side of the turret. Pull up on the turret so it hovers above the tank body, then split the turret sides apart so you can lift the cannon barrel up. Once the barrel is above the turret, squeeze the 2 turret halves back together. Take the rearmost section of the tank treads and pull them up and away from the body. Rotate the rear treads so the tread molding faces to the back. Oull the front treads away and forward. Push the very front of the treads inward so you can flip the midsection of the treads in a halfmoon to join with the front end.

Lift the front of the tank body's center back, like a hood, then fold in the "grille" piece. Straighten the legs out as much as you can to the center. This will allow you to rotate the waist 180 degrees. Spin the entire leg assembly 90 degrees inward so the treads are facing out. Now, spin the lower half of the legs 180 degrees to show his feet. The shinplate for the feet will rotate 180 degrees, allowing you to fold the feet down and complete forming the legs. Back to the "top". Spin the turret 180 degrees, then spin the cannon 180 degrees so it lines up with the connected panel. You can now swing the assembly to the right side and lock it in place to form his right arm.

The rearward panel can now flip down 180 degrees to go against his back. Make sure to fold back the smaller panel. Position the 2 rear treads so they peg into the slots on the rear panel. The panel with the Decepticon shield is his left arm. CAREFULLY pull this panel around 180 degrees to form his left shoulder. I say carefully because the ball joint loves to pop out of place. Fold the gray piece down 180 degrees, the flip the small purple piece up to cap his shoulder. Spin the arm inward 90 degrees and flip out his fist to finish the left arm up. Back to the right arm. Twist the lower arm 180 degrees, then (while lining the missile battery up vertically) flip the battery panel around to form his right hand. Pull down on the inverted chest plate, slide up to expose the head and fold the panel back down. Take a break, you earned it! 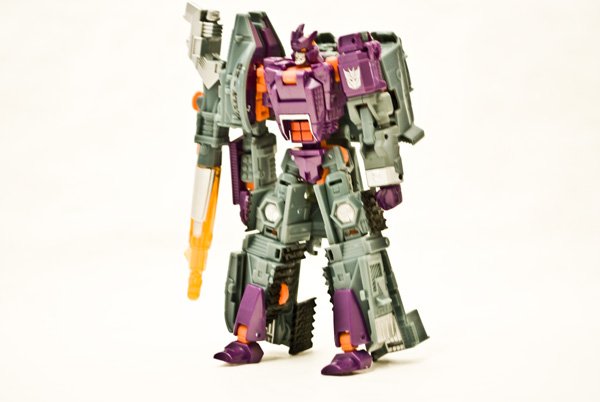 There is absolutely no mistaking this figure as anything else than Galvatron. Purple comes out in various places on the figure, including the chest, left shoulder and feet. There is also orange paneling on his abdomen. The draws to G1 Galvatron are numerous. The arm cannon, for instance, is faithful to the G1 design. The head sculpt is also well done, with the 3 point crown and orange piped eyes. 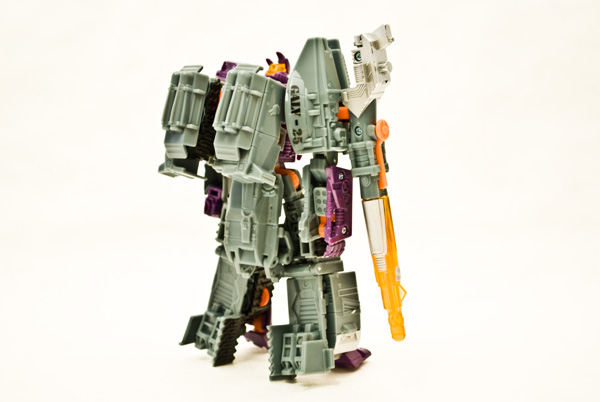 With such an intricate transform sequence and such a small size classification, there's bound to be some design flaws. Although unmistakeably Galvatron, it is nonetheless a clunky looking Galvatron. The right arm is beefed up due to doubling as the alt mode torrent, so he has an asymmetrical feel. The legs also look subpar, especially when viewing them from the sides. The rear treads never want to lock in place tight, so they tend to flop around. Worst of all, the figure is poorly balanced. 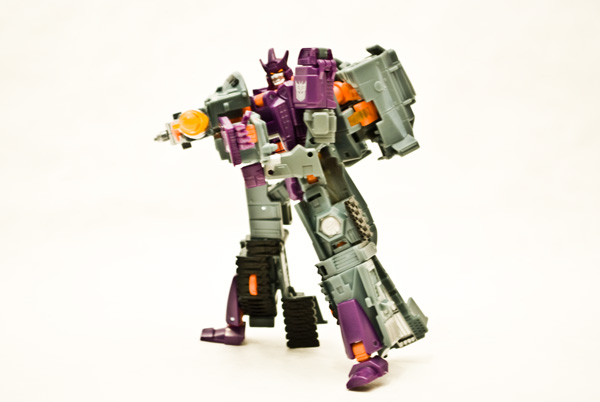 
The left shoulder has a hard time staying in joint. You can lift the upmost panel on the left shoulder to get more articulation, but then it gets in the way. Due to the arm cannon, gravity tends to make him fall to the right. As fragile as he is, it can be frustrating to get in a pose.

:Nice (if not drab) tank mode with a stellar barrel.
Robot Mode -

:One word: MESSY. Which is too bad, because he had so much potential. Overall -

: This should have been a Voyager. Constraining the design into such a small figure ruined it.
Size Class: Deluxe
MSRP: $10