It's been almost 2yrs since the Unicron Trilogy has come to a close. Arguably the best of the 3 series was Cybertron. Known as Galaxy Force in Japan, Cybertron told a story of Unicron developing into a black hole which threatened the planet Cybertron and the universe as a whole. To save the universe, 4 Cyber Planet keys had to be found. Hasbro and Paramount have elected to give fans the entire 52 US episode series in one convenient set. This review will cover just exactly what you will get. 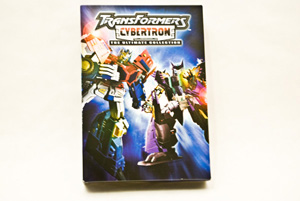 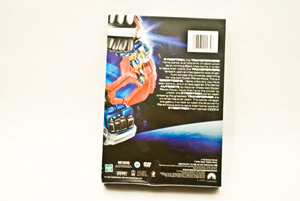 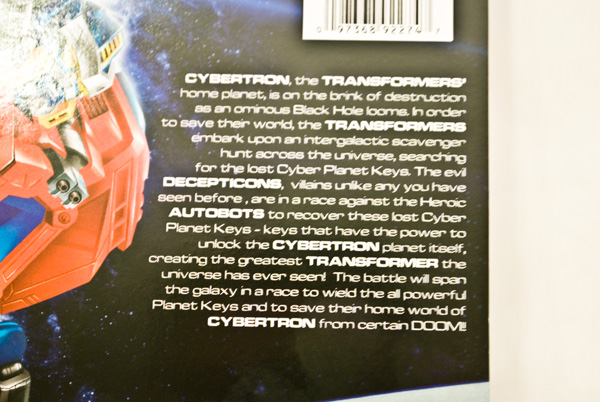 There are 7 DVDs total in this box set contains in slim line DVD cases. Each case holds 2 DVDs. As one might suspect, this means no content within each DVD case, and you would be right. 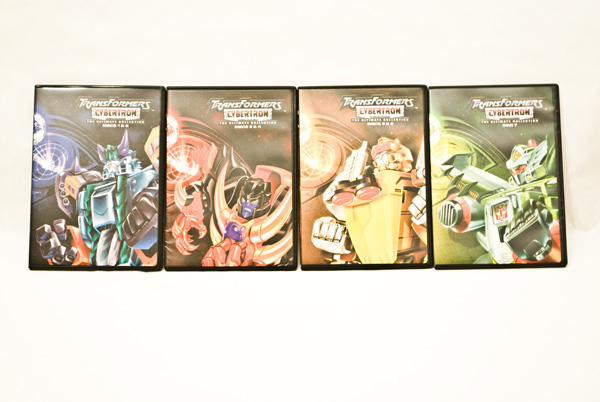 The front of each case depicts either a Decepticon or an Autobot. The artwork is from their respective toy boxes. The rear of each case contains a faction insignia along with the episode listing contained within. Each disc holds an image of even more box art from toy boxes. They definitely didn't go out of their way to create a unique experience for the contents. 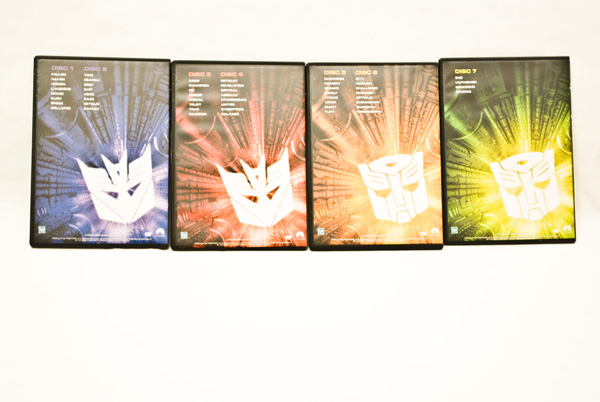 The episode listing is exactly as it aired on Cartoon Network. Which is to say, the first episode is butchered and the last episode is a director's cut of the 2nd episode. The title screens are, again, static images of box art. There are only 2 selections: Play All and Episode Selections. Nothing interactive about it. The discography is as follows: 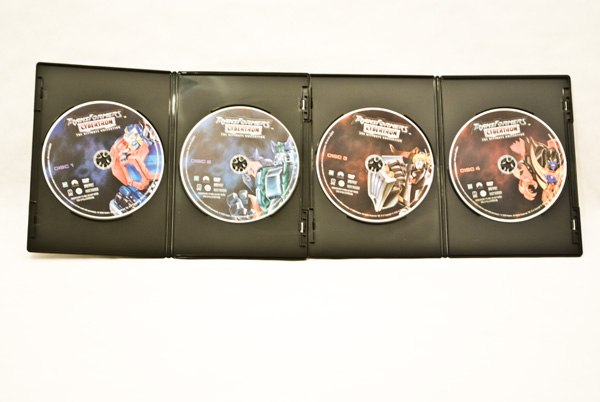 1) Fallen - The opening of the series. Megatron steals the star map and Landmine is shoved through the space bridge to Earth.
2) Haven - Landmine is cared for by the 3 humans (Bud, Lori and Coby) until the Autobots locate him.
3) Hidden - The Autobots construct their secret earth base and the Decepticons make their full appearance on Earth.
4) Landmine - Landmine struggles to recover from his injuries while the Autobots check a lead on the Omega Lock. Hot Shot and Red Alert are sent to the location of the 2nd Cyber Planet Key, Velocitron (The Speed Planet)
5) Space - Scattershot escorts Bud to space, but stray Decepticon fire knock them out of orbit and the Autobots attempt rescue. Hot Shot blows his and Red Alert's cover on Velocitron.
6) Rush - Megatron confronts the Velocitron leader, Override, and challenges her to a race. Hot Shot joins in thinking it's his chance to win the key.
7) Speed - Hot Shot continues to challenge Override for a shot at the key while Thundercracker devises an Autobot trap
8) Collapse - On Earth, the Autobots try to stop a potentially devestating earthquake that threatens the children's city. On Velocitron, Megatron looks for the keys using force.

9) Time - The Autobots on Earth check a lead for the Omega Lock in the Sahara, and Vector Prime reveals his ability to alter time. Red Alert informs Optimus Prime of Hot Shot's recklessness.
10) Search - While the Autobots check another lead for the Omega Lock, Overhaul is forced to deal with Megatron and Starscream on Jungle Planet
11) Deep - Megatron and Overhaul try to convince the ruler of Jungle Planet, Scourge, of their need for the Cyber Planet Key there. The Autobots on Earth discover Atlantis
12) Ship - After the Atlantis ship warps to the moon, both factions race to recover the Omega Lock located within. Sideways makes his first appearance and Hot Shot collapses from dangerous modifications to his systems.
13) Hero - Optimus Prime heads to Velocitron to see the extent of damage Hot Shot has brought. However, he ends up entrusting Hot Shot to win the races necessary to retrieve the Planet Cup, which ends up being the Cyber Planet Key
14) Race - While Hot Shot races his first of 3 races on Velocitron, Starscream begins his defection from Megatron and starts building his own army.
15) Detour - On Velocitron, Hot Shot races the 2nd of 3 races. On Jungle Planet, Overhaul again confronts Scourge to recover the Key there. 16) Savage - As Hot Shot prepares for the final race, Optimus receives a distress call from Jungle Planet. Overhaul, on the brink of shutdown, goes through his transformation to Leobreaker

17) Sand - Hot Shot endures the grueling final race and teaches Override a lesson about the Autobot code. Sideways arrives on Jungle Planet and attempts to make the 2 Cybertronian factions fight each other. Optimus Prime's Savage Claw mode debuts.
18) Champion - Hot Shot relies on Coby operating him to help him win the championship and the Planet Cup.
19) Ice - The 3 Earth children meet Professor Suzuki while tailing the Autobots to the north pole. There, they are ambushed by Starscream and his team.
20) Honor - Against Optimus Prime's orders, Leobreaker attacks Scourge and loses. This creates a temporary rift between the 2 longtime friends.
21) Primal - Lori and Override join the others on Jungle Planet in an attempt to talk sense into Scourge before he fights Optimus Prime.
22) Trust - Optimus devises a plan to confuse and divide the Decepticons, who want the newly found Cyber Planet Key on Jungle Planet. Dr Suzuki discovers Crosswise.
23) Trap - Starscream deceives Megatron and traps him in an unbreakable cube prison. Crosswise checks on his holding cell for "monsters", who turn out to be Decepticons. The Autobots follow/
24) Invasion - Starscream buries Optimus Prime and others in ice at Crosswise's holding cell, then uses his new army to mass search for Earth's Cyber Planet Key.

25) Retreat - While the kids and the minicons escape the clutches of the Military, Sideways discovers the Autobot's secret base and launches an all out attack.
26) Revelation - Scourge manages to help Megatron escape from Starscream's prison. Going to Earth, the Autobots are now faced with 2 epidemics
27) Critical - Red Alert, Hot Shot and Scattershot are critically damaged, but Primus bestows a gift on them, forming them into the Cybertron Defense Team.
28) Assault - The Autobots and Decepticons converge on Starscream's remote island. Wing Saber makes his appearance.
29) Starscream - Absorbing Primus' energy stream, Starscream becomes enormous and proves to be a challenge for both factions. Meanwhile, the Cybertron Defense Team arrive on Cybertron to find it infested with Scrapmetals.
30) United - A second wave of Autobots are sent to Cybertron with Decepticons following close behind. The fight with Starscream continues. Optimus Prime's Sonic Wing mode is revealed.
31) Cybertron - Megatron is seemingly destroyed in his own dimension, and the Autobots use the Omega Lock to repower Cybertron. Instead, they get a startling surprise.
32) Balance - Cybertron is revealed to be the Transformer creator Primus. Using Jolt as a conduit, he reveals the origin of the black hole as well as the location of the final key. 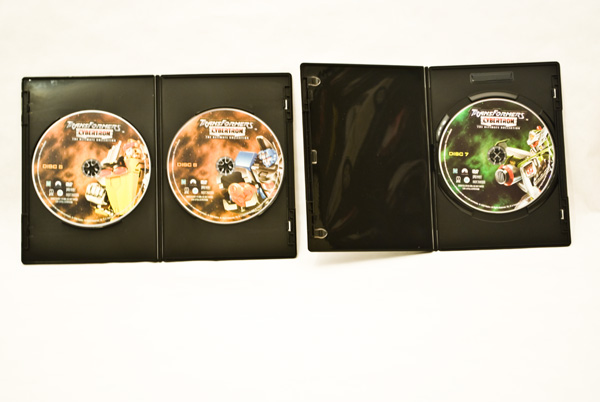 33) Darkness - Sideways kidnaps the minicons and the kids follow to help their friends. Meanwhile, Megatron learns another secret of the Unicron armor he adorns.
34) Memory - While the kids try to prevent Sideways from tapping into (and ultimately destroying) Jolt's memory, Megatron uses his new powers to forge Nemesis Breaker and shows off his new Dark Claw mode.
35) Escape - With Optimus Prime forced to fight Megatron, Vector Prime attempts to rescue the minicons and children. However, Bud gets trapped on the ship and warps with the ship
36) Family - Coby and Lori decide to come clean with their families about their experiences and their situation concerning Bud. Optimus Prime reveals himself to the humans and vows to protect the children on their journey to Gigantion (the Giant Planet)
37) Titans - Primus attempts to slow down the black hole, but Starscream breaks into the stream and a planet-scale battle ensues.
38) Warp - The Autobots board the ancient Velocitron ship Ogygia to travel to Gigantion. However, they find the Atlantis... and trouble
39) Giant - The Autobots arrive on Gigantion and try to convince a race that abandons their past to help them dig through the past and find the Cyber Planet Key
40) Fury - After Megatron's defeat by Gigantion leader Metroplex, his fury transforms him into Galvatron. The Autobots are severely injured fighting this new foe.

41) City - Bud and the 2 missing minicons are rescued and the Autobots split into 5 groups in an attempt to find the Key.
42) Ambush - As each Autobot team digs deeper into Gigantion, they are met by Decepticon teams attempting the same.
43) Challenge - The history of Gigantion, as well as the history of Sideways' home planet (Planet X) and the explanation of Gigantion's size is revealed. Snarl and Leobreaker fight Scourge for leadership of the Jungle Planet, which is now fast becoming a victim of the black hole.
44) Scourge - Bud and the minicons are sucked into a secret passage and eventually encounter Scourge, who slowly goes through a psychological change. The Cybertron Defense Team go after Galvatron.
45) Optimus - The Lemuria ship is found, which contains the Cyber Planet key. Optimus goes through a trial of doubt after Galvatron defeats the Cybertron Defense Team. Landmine gets a taste of the key's power while defending it from Starscream.
46) Showdown - It's Galvatron vs Starscream in a devastating showdown for possession of the key. The Autobots can do nothing but watch, while Sideways and Soundwave sacrifice themselves to get the key.
47) Guardian - Due to the epic battle between Galvatron and Starscream, the space bridge created by the Omega Lock is destroyed. Attempts to build another bridge fail. Vector Prime sacrifices himself to shift back time and help the Autobots return to Cybertron.
48) Homecoming - Galvatron pulls Jungle Planet through the space bridge and attempts to feed it into the black hole. Transformers from the 4 planets unite for the ultimate showdown.

49) End - Galvatron feeds energy into his Decepticon forces and enlarges them. He then goes towards the black hole in an attempt to overload it. All 4 planet leaders and Prime fight Galvatron and retrieve the Omega Lock. Cybertron, and the universe, is saved. Cybertron goes through a reformat, becoming elements from each of the other 4 planets.
50) Unfinished - Galvatron, now distraught, gets renewed hope from an unlikely source. While the Autobots try to help the Jungle Planet return to it's original orbit, Galvatron tries to sabotage the effort. Optimus has the final showdown with Galvatron... and destroys him.
51) Beginning - The final episode. All 4 planets enter negotiations to decide the fate of the keys. Optimus gets support to search for new planets.
52) Inferno - An expanded version of Haven, including cut scenes

In the past, Hasbro has released an entire series on 2 DVD packs while trying to pack in extras. This time around, they decided to forgo the extras and pack 7 DVDs encompassing the entire series. While this helps with keeping costs down ($40 MSRP), it does leave the set looking rather bland. For those who are show completists, it's hard to pass up. For those who are looking for something behind the scenes, or are looking for something more faithful to the Galaxy Force discography... well, this won't be it.