Blitzwing has been missing from the lineup for a long time now. While fans anticipated a return into the Classics/Universe lineup, they were shocked to find out he would be featured in the Animated series instead. For almost a year, fans have impatiently waited for this triplechanger to make the shelves. The wait is just about over, as sightings are becoming more and more common. This review will cover all three of Blitzwing's forms.

Even by Decepticon standards, Blitzwing is totally insane. He's got three personalities packed into his cyberium-steel chassis, and he argues with himself almost as often as he argues with other Decepticons. The only person he listens to without interrupting is Megatron, because all three of his personalities are terrified of the Decepticon commander. He carries a superheater cannon and a hyperfrost emitter to burn or freeze his enemies.


Sometimes changes to tank in midair, and crashes
Likes to freeze, then melt his opponents
Has trouble flying in a straight line 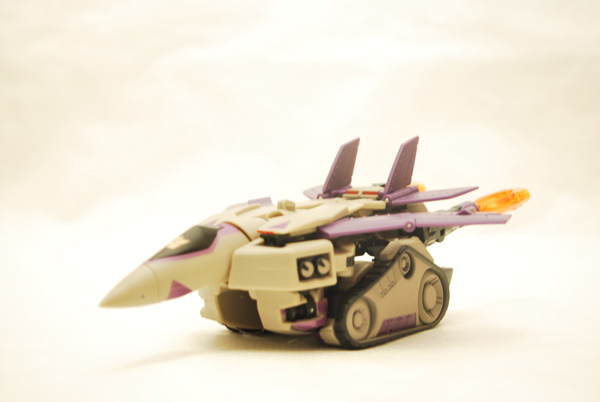 For his first mode, Blitzwing uses a jet. The jet is mostly khaki in color, with purple wing assemblies. There is also purple surrounding the cockpit and in other places. The cockpit is all black and has a khaki Decepticon emblem on it. There is also black in various spots. 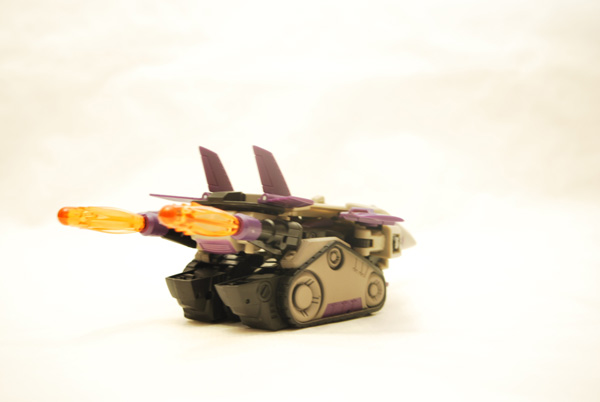 The 2 missiles that Blitzwing comes with act as his engines in jet mode. They also help keep the tail assembly somewhat in place. It doesn't have a way to lock down, so it can sag out of place if moved enough. The same can be said for the nosepiece, as it can have a tendency to droop due to no locking mechanism. The side view looks a bit clunky, mostly because of the tank treads and the various gaps in the body work. Overall, a good design but a couple of more tabs would have been great.

Start by folding the nosecone underneath itself. Grab the cockpit and fold it underneath the body, making sure NOT to grab the piece behind the cockpit. Fold the vertical tail wings onto the horizontals, then rotate the tailfin assembly around and back. The next part can be tricky. There are 2 khaki folding tabs. Flip the rear assembly up and over, while trying to position those 2 tabs as low as you can. If you do it right, the rear assembly should flip completely over and lock into the tab that was on the jet's back.

Fold the wings back until they meet. Note the hinge on the end of each wing. Fold them down slightly so they're at a 30 degree angle. You will find a trap door on the bottom of the treads. Open these doors, then swing the rearmost part of the treads into the recess. Close the trap doors. Finish the job by swinging each missile launcher 180 degrees to the front. 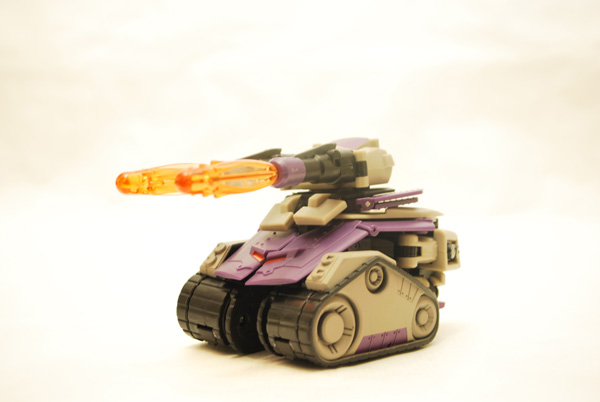 The tank mode retains the khaki color for the most part. The front end is now washed in purple. There is red section within the purple. There are 4 plastic wheels within the treads that allow rolling. The rear engines from the jet now make up the 2 barrels of his turret. Each turret has it's own launchable missile, done in translucent orange. 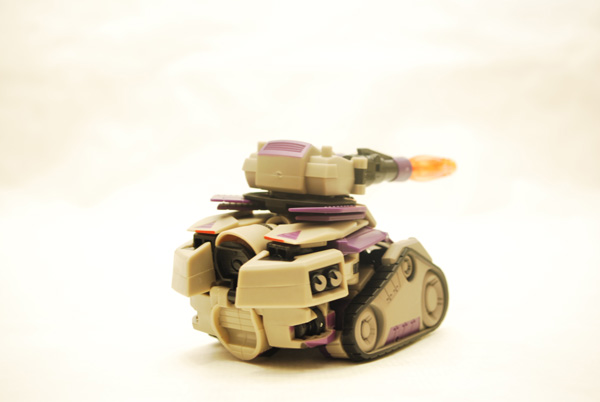 While the barrels have no tilt ability, the turret can rotate a full 360 degrees using a 16pt ratcheting system. Although still a little clunky looking from the side, the gaps are much less noticeable. The part that is perhaps the most incredible about either vehicle mode is that you can hardly notice any robot kibble. That's quite a feat.

Pull the treads down and around to form his legs. Find the trap doors again, and swing out his feet. Don't forget to swing out his heels as well. Bend the wings straight, then pull them out. Pull the turret loose from the tab. Now, grab each remaining piece of the rear assembly and pull it down and forward to make up his arms. Grab his arms and pull them down.

At this point, you can take each wing and fold them back so they rest behind his shoulders. Grab the head assembly from his back and flip it up. Turn his helmet around so you can see his face (er, faces) then relock the turret assembly onto a new tab on his back. 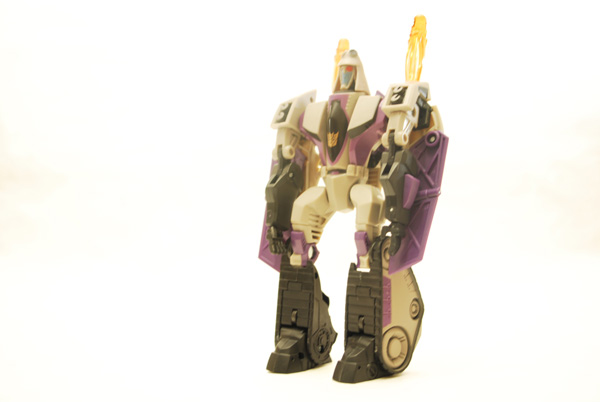 This is where Blitzwing shines the brightest. The show accuracy is virtually dead on. His lower legs, comprised of the tank treads, are black. The knees are purple, with the upper legs in khaki. On his khaki waist, you can spot his "utility belt". The chest is comprised of the black jet cockpit, with purple and khaki on the sides. The forearms are in black, with the upper arms in a mix of khaki and black. 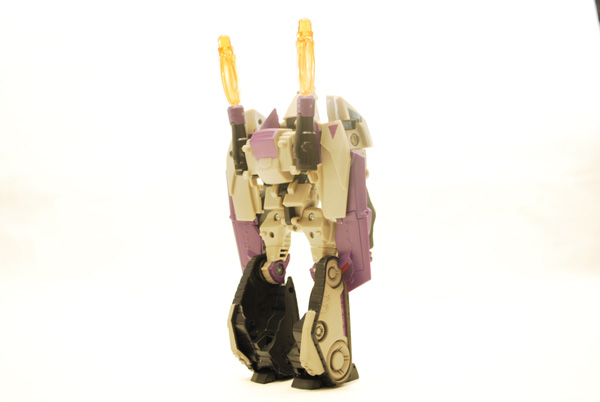 One of Blitzwing's main gimmicks is his 3 distinct faces. There is the cold, calm face with the monocle. There is the fiery, rage engulfed face. There is also the black and completely maniacal random face. All three can be positioned by a thumbwheel behind the head. The thumbwheel is hard to grasp (and therefore turn), so you may have to spin the faces around by fingertips. The faces are nicely detailed, and they're spaced right so you won't see remnants of the other 2 faces if positioned properly. Sadly, the rear turrets don't tilt to form shoulder cannons. 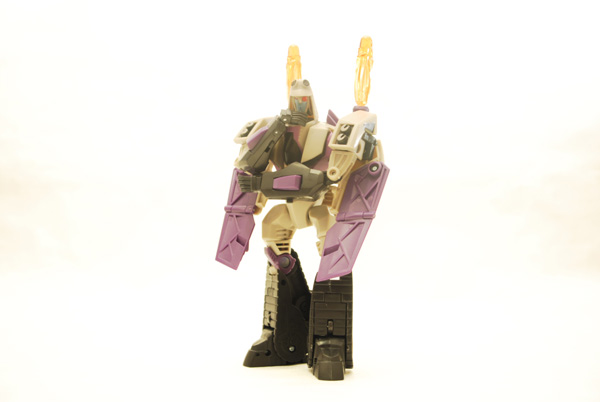 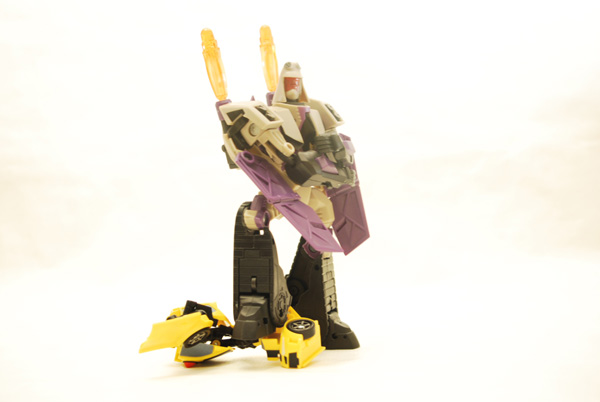 There is alot of good posing ability. Although the shoulders are somewhat limited, you can get him to cross his arms or support his face. So they got the important ones down. The wings can get in the way, but there is a fan fix for that. See TFormers member Matt Booker's fix

:Could use some locking tabs for the nose and rear wings. A bit gap laden.
Tank Mode -

:Still some gaps, but not as noticeable. Holds well on it's own
Robot Mode -

: Could have used just a tiny bit more work on the jet, but otherwise everything a triplechanger should be... and more. 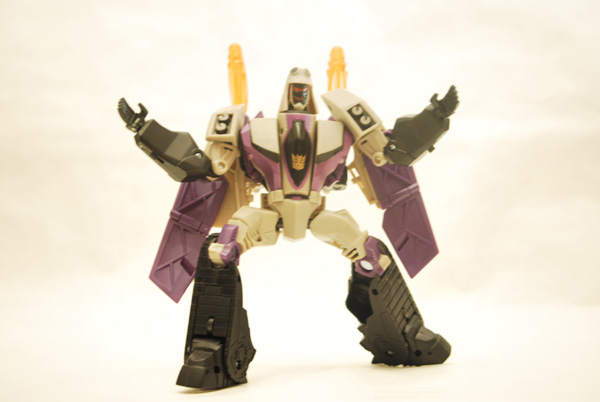