Up until now, Sentinel Prime has been a character that was relegated to comic lore or an occasional anime reference. Animated has given him a regular face and followed it up with a figure.

"Without law, all is chaos!"

Graduate of the same class as Optimus Prime at the Autobot Academy, Sentinel Prime is commander of a squad of the best the Autobots have to offer - The Elite Guard. Though he is a powerful warrior and a cunning leader, he is also obsessed with following rules to the absolute letter. He is unbending in his interpretation of procedure, and dislikes the way Optimus Prime and his crew improvise. If he had his way, that whole group would be sent back to Basic Programming


Battle lance fires energy blasts
Shield can absorb energy and convert into fuel
Thinks humans are gross, and may be contagious 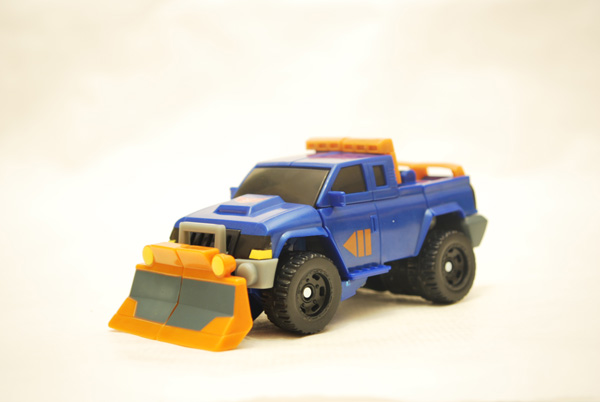 Sentinel Prime has chosen the alt form of a heavy duty pickup. His main theme is blue, but he is also dressed to the hilt in accessories. The front features a plow, gray in the middle with an orange outline. He also has a gray grille guard. Towards the back, he has a roof rack and spoiler setup, both in orange. The windows are all tinted black, and he has an orange arrow graphic on each door. His hood wears the Autobot Elite Guard insignia. 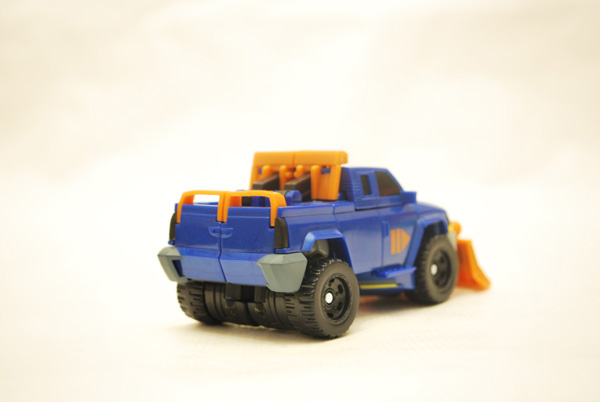 Sentinel's lance and shield neatly attach to the back of the cab for easy transport. Details are decent, including running boards and door etchings. The plow can also move at an angle for snow removal duty, but cannot tilt back. For the most part, the alt mode is done nicely. One major gripe is that the head is clearly visible from the bottom of the front end. No matter how you position it, it sticks out like a sore thumb.

Grab the cab roof, pull it up (don't worry, the windshield will not move) and pull it back to lock against the bed of the truck. Dislodge the doors from the fenders, then pull out and forward until the tabs behind the rear wheels lock into the front wheels. Pull down on the rear end of the truck until his waist falls in place. Straighten out and separate the legs.

Straighten out the arms. Split the plow in 2 halves. Fold them over the top of his head, then spread them out as far towards his shoulders as you can. Grab behind his head and push forward. Slide the lance back from the shield to dislodge. The shield and lance fit in either hand. 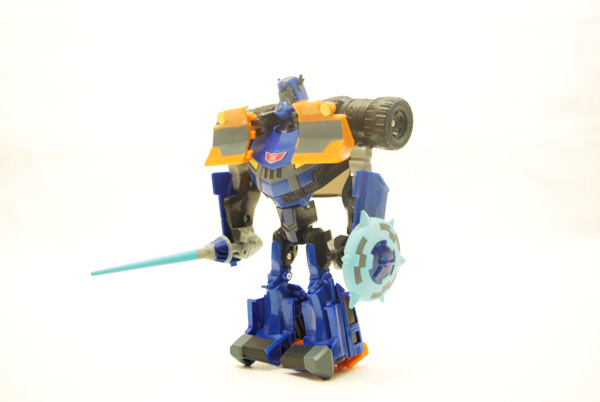 Sentinel Prime's robot mode isn't as faithful as some of the others have been in respect to the show, but they came close. The chest area is a faux inclusion of the alt mode front end. The blue paint job is still prevalent, with the orange plow halves on his shoulders breaking the contrast. The turquoise shield and lance also give some contrast. The head sculpt is well done, as it has been for others. One curiosity, the head looks as though it's set up for piping yet the eyes are painted in. 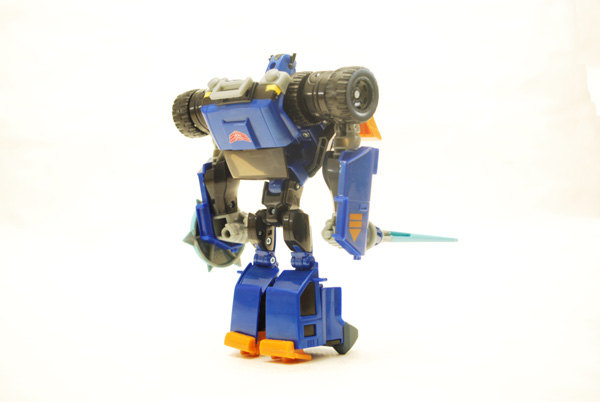 As mentioned earlier, the shield and lance fit into either hand. The shield slips into the peg in the hand then slips OVER the door kibble, giving the look that the shield attaches to the door. The legs look kind of funky, not as streamlined and curved as other figures. Speaking of other figures, it surprises me that this would be a Deluxe. It makes it hard to scale with the other Autobots, as Earth mode Prime towers over him. Had this been a Voyager, it may have turned out to be a better figure. That's not saying it's not good as it is, though. 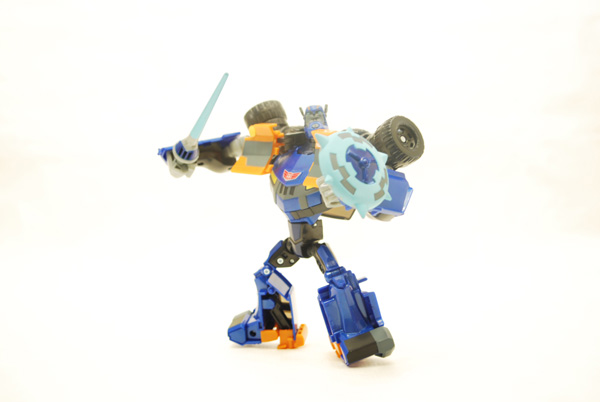 
The connection scheme for the shoulders is weird and tends to pop out of place alot. The floating ball joint scheme for the hips gives a very wide range of leg poses.

: Could have been... should have been a Voyager. But for a Deluxe, he's pretty sweet.
Size Class:Deluxe
MSRP: $10