The last time we saw a Swoop figure, it was with the Dinobot 2 pack in Energon. That version was pretty miserable. The beast mode wasn't too bad, but the root mode left alot to be desired. Animated gives another go at the aerial Dinobot.

Like the other Dinobots, Swoop prefers to be left alone on Dinobot Island, where he can soar and dive without worrying about the Decepticons taking pot shots at his wings. When he does have to return to the mainland to battle the Decepticons, however, he enjoys the way people scatter when they see his shadow. That, and smashing trees with his ball and chain doesn't compare to the satisfying crunch it makes when it bashes into Decepticon armor 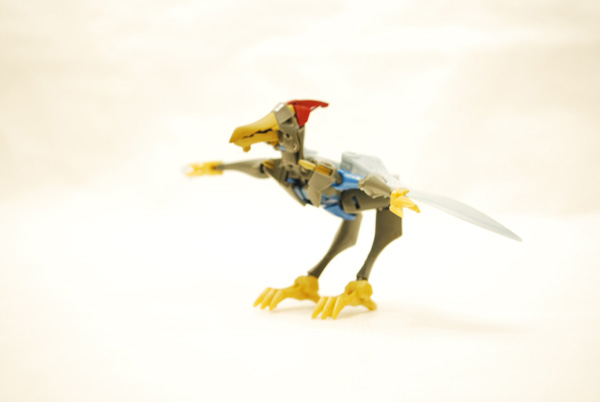 Swoop retains his classic alt mode of the Pterodactyl. His body is mostly in a dark gray, with the wings being a cyan color. His jaws, talons and claws are gold, and the plume above his head is red. The jaws do open, but don't open them too far or you'll pop out the robot head. 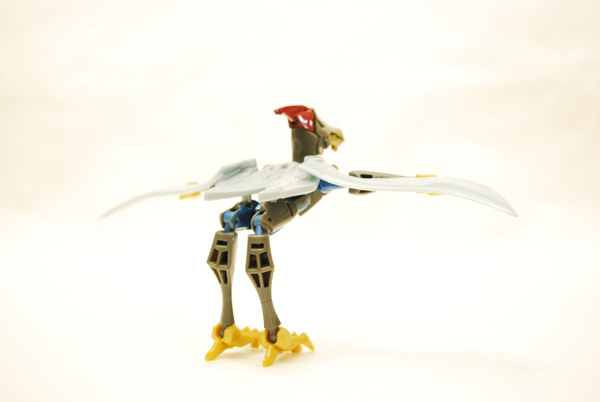 Each wing has 2 sets of pivots. It's unfortunate that the arm assembly for the robot mode interferes with their full capability. If you want to move the wings, you have to move them with the arms to make sure you don't pop them out of place. The head is also a bit of a mess. You can only have the head at an angle, as it won't bend to be more linear with the body. Finally, while the feet look like they'd be good enough for balancing, they're really not. It's hard to keep him in a perched stance, even though you can bend the rear talon to do so.

Straighten out the legs so they are linear with the body. Rotate the lower legs 180 degrees, then rotate the waist 180 degrees. Unhook the arms from the wings and fold the wings down. Pull each shoulder away from each other and up towards the head. Fold the beak down until the tab on the bottom lines up with a tab in the torso area. Continue to align the chest so that the notches on the chestplate line up to the hinges on the bird's beak. Pivot the wing assembly so it's closer to his shoulders. Align the arms and you're finished. 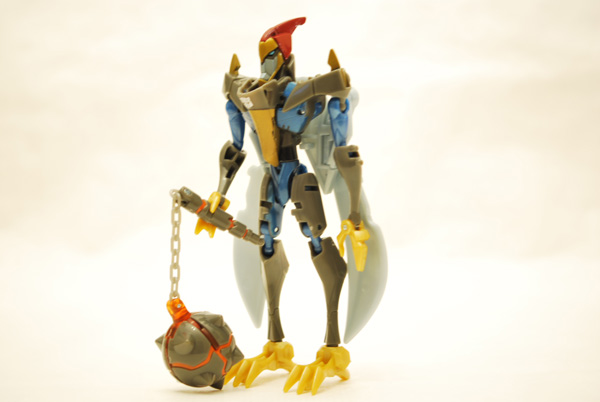 Swoop's robot mode is pretty close to his TV counterpart. The limbs are gray with some blue showing. The chest is blue except for where the gold beak is recessed. HIs head scult is done in a silvery blue, with the eyes being the same color as his wings, which now lay folded on his back. 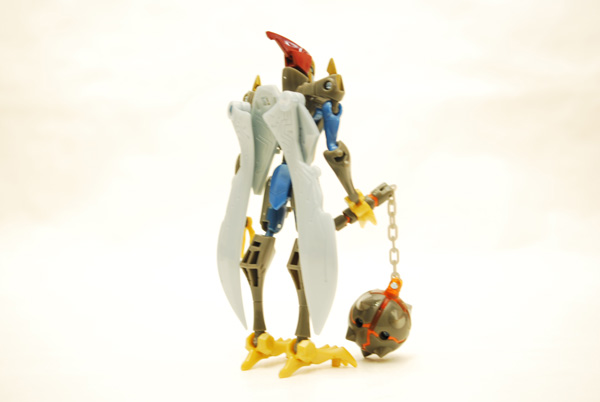 The ball and chain weapon fits snugly into either hand It is gray and translucent orange, with a gray chain. The chest sides don't really fasten too securely, so if the figure is moved around enough they will start to sag. He's a very nice figure overall in robot mode, just a bit fragile. 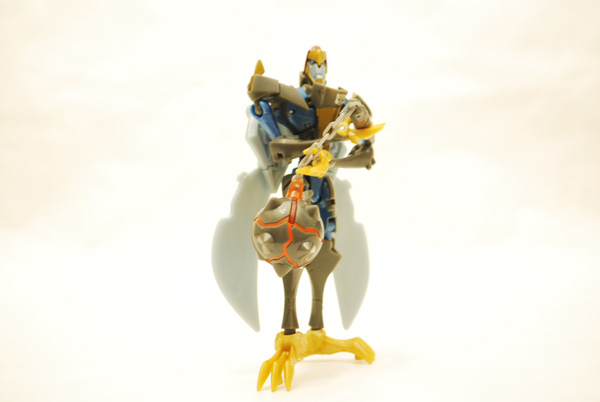 
Hip movement is slightly hindered due to the wing assembly. Also, because of the way the beak hooks into the torso the waist is meant to be stationary. However, lifting the beak slightly will allow waist rotation. Finally, be very careful about the head. It likes to pop off the ball joint alot.

:Decent looking but should have had more functionality.
Robot Mode -

: Better than Energon, but could have been done better.
Size Class:Deluxe
MSRP: $10