The Titanium line has gotten a short reprieve, thanks to Toys R Us. Two exclusive figures are now lining shelves at the toy store. These molds were in the final design stage shortly before Hasbro pulled the plug on the project. This review covers Prowl, the Autobot's version of Shockwave

The most single-minded of all the Autobots, Prowl is sometimes referred to as "the commander's Sharkticon" because of the way he seizes a problem and refuses to let it go until it is solved. He rivals even Shockwave in the fields of cryptology, logistics and strategic planning. In fact, the two of them will occasionally engage in complex shadow wars that rage just beneath the surface of an ongoing battle, logical games designed more to frustrate and confound each other than secure victory for their sides.

Prowl believes that there is a reason for all things. He struggles to understand the perspective even of his enemies, believing that if he can discern the logical underpinnings of the Decepticon cause, he can devise a strategy for final victory. Though he is often torn by emotions in conflict with his logic, he has difficulty understanding how others can be so ruled by feeling and instinct. He believes that all creatures behave according to some complex arithmetic, and that if he could only work it out, he could bring peace to the universe. 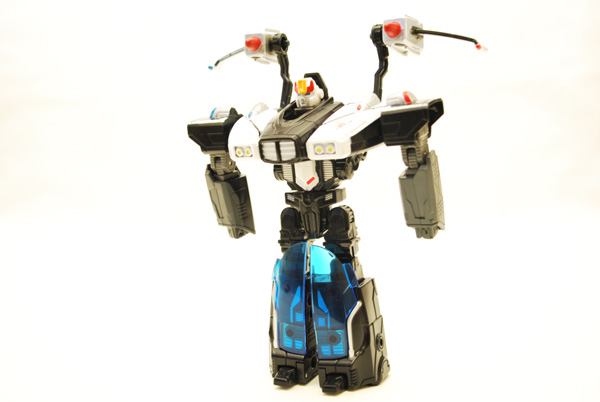 Since the figures are packaged in robot form, we'll go over the robot mode first. It has the classic attributes of Prowl. The figure is mostly black in color. The lower legs are done in translucent blue. The abdomen and sides of the chest are in white. There is an Autobot insignia encased in a star type badge located on his left front fender. The arms are PVC gray. In various spots, you will fine blue and red appliques signifying his law enforcement position. Areas include his abdomen and shoulders. The head sculpt is done in G1 fashion and looks good. 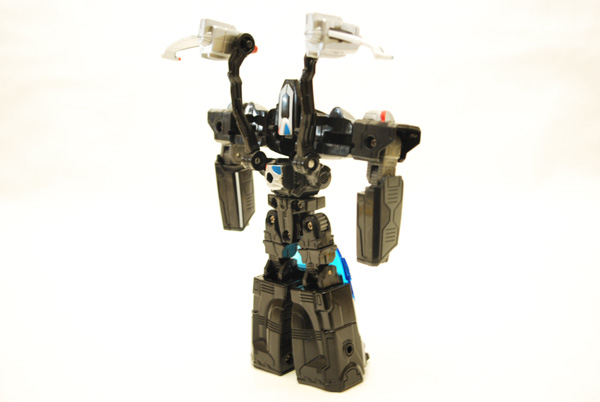 Two things strike me weird about this figure. One are the shoulder cannons. Instead of being right on the shoulders, they hang out well above. There is no real adjustment for making them look more in place. Lining them up with the shoudlers will push them out way back. The other eyecatcher is his skinny, yet very broad chest. It almost looks unnatural. While the chest is a minor gripe, the shoulder cannons just look goofy no matter how you position them. 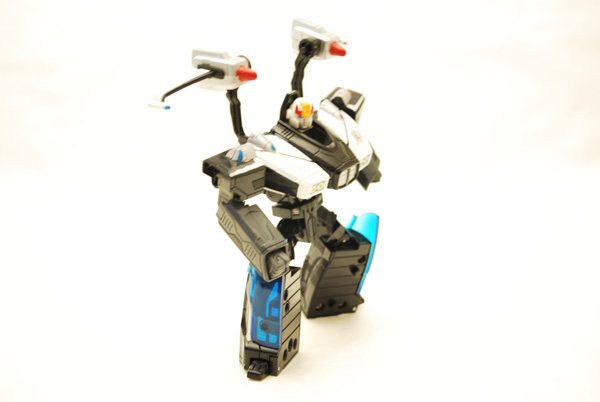 
Leg poseability is hampered slightly by the blocky joint movements. The shoulders are more forgiving. Joints are unusually tight for a Titanium, which is good.

Flip his head down. Twist the lower arms 180 degrees then spread out linear to his shoulders. Push the arms in so the lower arms are flush with the shoudlers. Move the shoulder cannons down towards the legs. Move the chest forward, then flip up.

Push the legs together, then contract them into the waist. Fold the feet down. Attach the shoulder cannons to the rear of the craft via the pegs. Pull the sides of the chest out, then fold the arms back so they're behind the shoulders. Push the shoulders back in to complete the process. 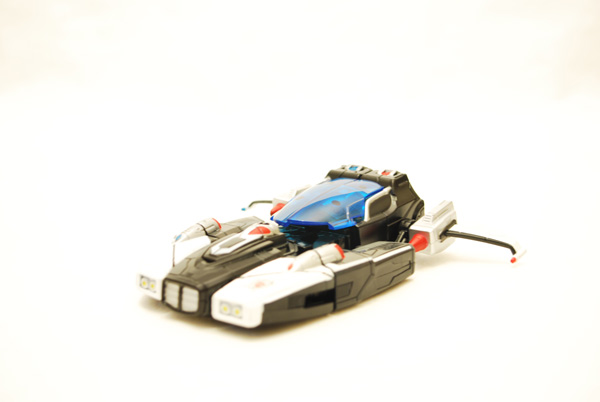 Prowl transforms into a hover car decked out for police duty. The car is mostly black, with the front fenders being in white. The front end features quad headlights and a grille. The rear is almost entirely made of cockpit. The shoulder cannons form rear stabilizing wings. You can make out 2 engine fans on the rear. 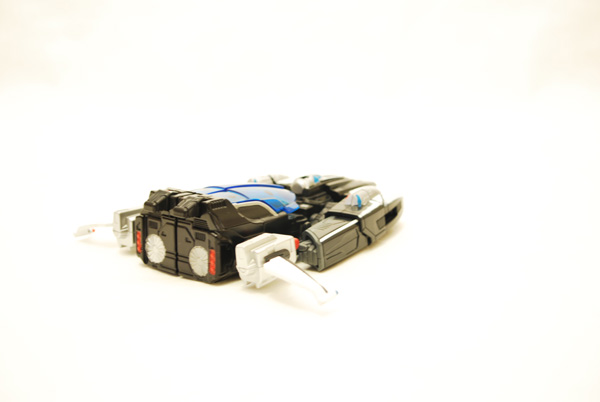 Prowl has more police lights than a SWAT truck. There are 3 on each front fender, 2 on the hood, one on each rear wing and 2 behind the cockpit for a total 12. The design has alot of potential but, in typical Titanium fashion, is executed in mediocre fashion. There is way too much gap between the hood and the cockpit, which destroys the fluidity of the design. There are no wheels on Prowl, so the bottom can be susceptible to scraping.

:Too much gap between the hood and cockpit kills the look.
Overall -