Grimlock fights not because he believes in the Autobot ideal of peace and freedom, but because he knows what Megatron really is. He was there at the beginning of the Decepticon movement, mudguard deep in the spilled oil on the arena floor. He knows what it is to feel the electron-surge of total victory over his foes. His coolant too has sung as he pressed his blade against the torso of a helpless opponent.

But to Grimlock, no weakness is worthy of respect, lease of all that weakness that disguises itself as strength. Where is the satisfaction of crushing those who cannot defend themselves, or slaughtering a building full of unarmed innocents? How does madness like that prove one's strength? Better to die fighting against an enemy so powerful that defeat is almost certain. Better still to turn that enemy back and drive him broken before you. To someday see Megatron so broken – that is why Grimlock fights Unique Feature – Tragic programming flaw resulting in a speech impediment 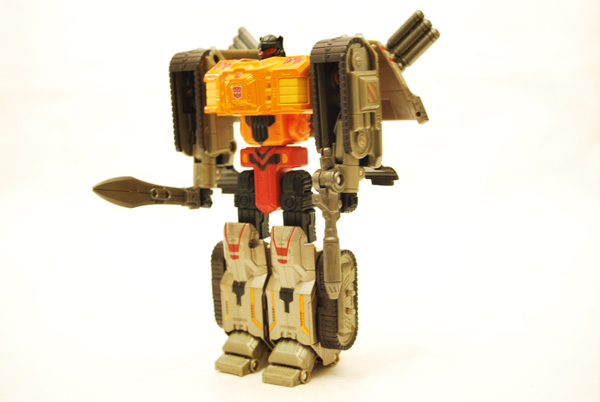 Since the figures are packaged in robot form, we'll go over the robot mode first. It does a great job of depicting his robot mode. The legs are silver with red and yellow accents. The groin and waist area are in red, with yellow and black accents. Te chest is mostly orange, with yellow on the chest and some black on the abdomen. He also wears an Autobot insignia on his chest. The arms are all silver. The head sculpt is dead-on, and includes the pseudo-fang look on the mouthplate. 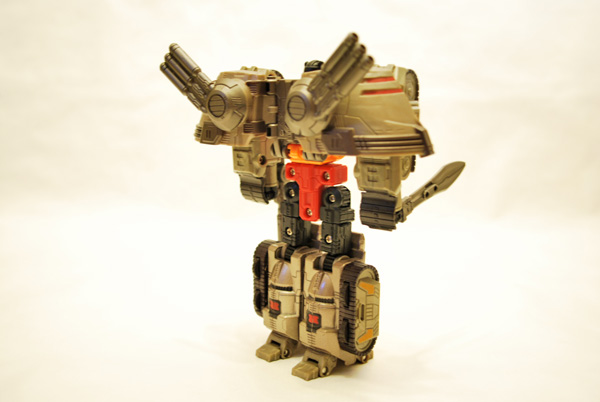 Grimlock is issued with both his rifle and his sword. Both look rather bland, especially the energo-sword. Maybe a translucent orange would have perked things up a bit. The chest also sits a tad too high, so it hides his small head a bit. owever, those are minor gripes to an otherwise great robot mode. 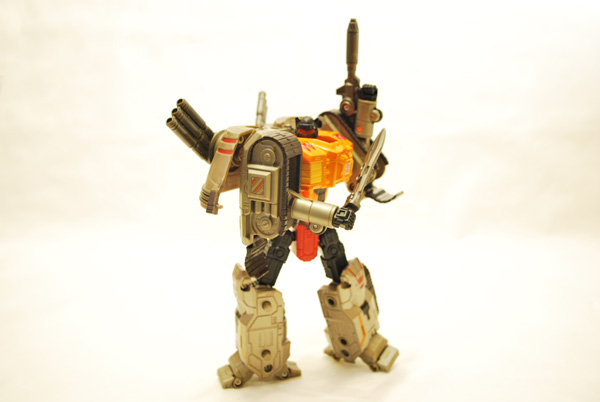 
Knee limitations hurt a little, but lack of shoulder spread and lower arm rotation brck this figure up a bit. The left arm flops around and is almost impossible to keep in place. In other words, typical problems with Titanium figures.

Fold up lower arms into the upper arms. Close the flap to finish forming the front treads. Unpeg the back end and flip the chest piece up. Peg legs together, then spin the waist 360 degrees. Fold the feet up, front against back, then collapse the legs towards the waist. Fold the 2 back halves together so they peg into each other. Spin the smokestacks back 90 degrees. The gun clips into a peg behind the front domed piece. The sword clips into 2 pegs located on the right rear tread assembly. 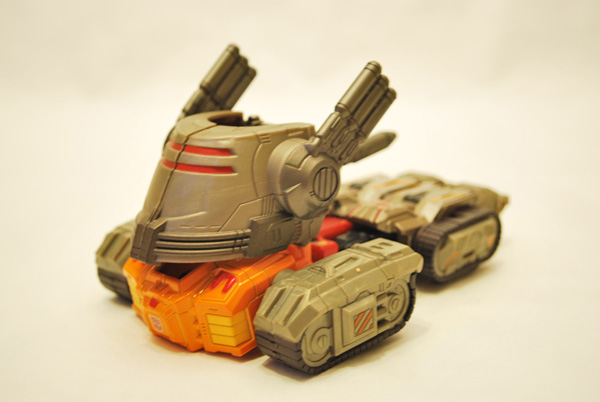 I thought for awhile as to what type of vehicle mode this could be. I came up with heavy duty treaded transport. The front cockpit area, rear and and front treads are mostly gray. The lower front end is on orange. There are 3 exhaust pipes on either side of the front end. His gun is clipped behind the front cockpit and can tilt to fire up to 90 degrees upward. It does not rotate for side shooting. 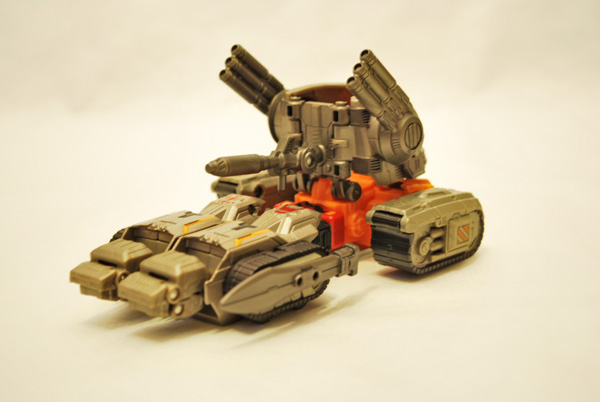 As much as Grimlock looks like War Within Megatron in basic shape, they don't share any components. They both have the same general failures, though. The rear and is just too long. Also, Grimlock's cockpit has a huge hole on the top. Were there more room to collapse the legs further, it would have made alot of difference.

:Horrible translation of alt mode from comic to figue.
Overall -