Around the same time that G1 Transformers was on the air, The Challenge of the Gobots came on. This competing line from Tonka had the advantage of most of their toys being more affordable. Their show also had a more diverse lineup. For instance, it featured females on both sides. The show didn't contain substance and was eventually cancelled long before Transformers. Hasbro has since bought Tonka, as well as all it's product lines. Slowly, Hasbro is finding ways to intergrate some of the GoBot personas into the Transformers universe. One of these immersions is of the renegade female known as Crasher. She was a psychotic henchwoman who had the ability to cause earthquakes with her feet and transform into a race car. For the movie line, Walmart has an exclusive on Fracture, who seems very similar.

Dedicated to Megatron and the Decepticon cause, Decepticon Fracture is a dangerous enemy. She is totally fearless, and probably a little bit crazy, as she dives directly into any battle, regardless of the odds. Although she carries a powerful negative energy blaster, she prefers to use the seismic energy dischargers on her feet to smash the surrounding earth to pieces Any battlefield on which she walks shudders with the force of her steps. 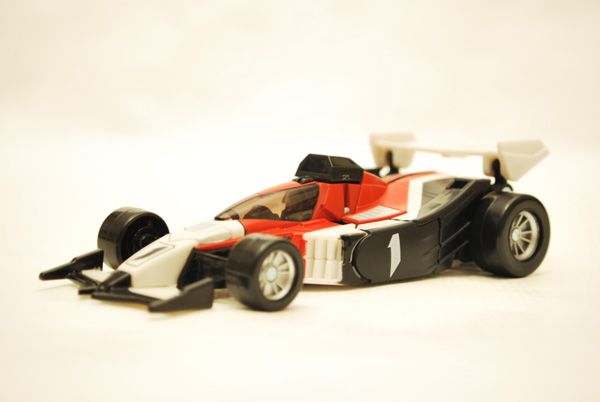 Fracture borrows her mold from Classics Mirage. The car is interestingly colored. Down the center of the car is red. There is a variable pinstriping of white which is also the color of the rear spoiler and front end. Draped on the sides and front spoiler is black. She has the number "1" on both the front spoiler and on the sides. The paint job and car number all pay reference to Gobot Crasher 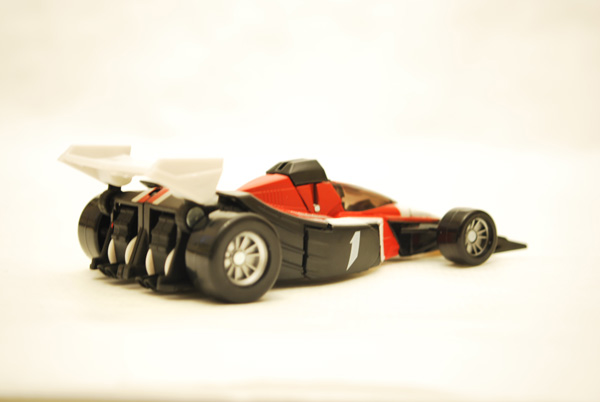 There is a Decepticon insignia just in front of the cockpit. Fitting that she would be a Decepticon. This was a great mold in the Classics line and continues to look good with the colors. The spoiler comes off looking a bit plain, but it's the only thing one could really complain about as the colors work very well here.

Transformation is identical to Classics Mirage. Start by removing the front spoiler. Peel the rear end upward at an angle, then pull up and back to extend the legs. Fold up the rear spoiler to form the feet. Remove the sides slightly, then bend the front end up to dislodge the arms. You can now pull the sides all the way to the front. Rotate the rear end 180 degrees.

Extend the arms all the way out. Grabbing the red area just below the cockpit, flip it over 180 degrees. Straighten out the arms, then twist the forearms 90 degrees in so the red stripes face out. Flip out the fists from inside the forearms. Finish things up by flipping the front end over 180 degrees to complete the chest and expose the head. The front spoiler, now a negative evergy blaster, fits in either hand via a peg. 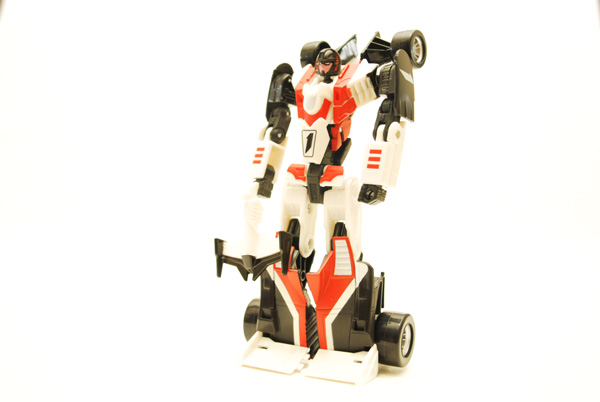 Although no new colors come out, the figure stands out very different than Mirage. The thighs are all white, while the upper arms are all black. Fracture's head sculpt is a repaint of Mirage's with the face painted in pink. Mirage had a feminine type look to it, and painting this mold for Fracture is perhaps one of the more brilliant ideas Hasbro has had. 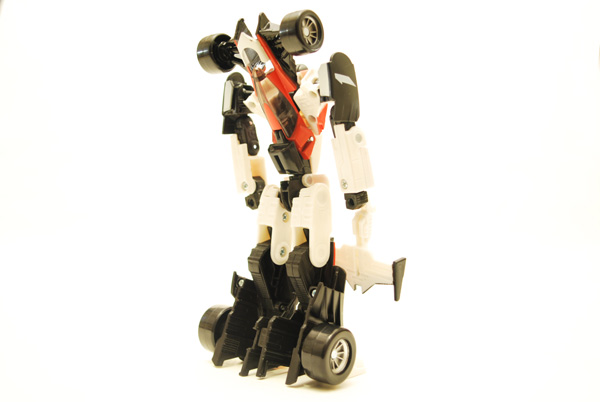 The only real complaint was a common complaint with Mirage: the waist. It doesn't lock in place and is pretty loose. Manhandling it too much (oops, a pun) can break it. It's also a bummer that the rear wheels stick out above the head. Howeve, still minor annoyances considering the overall look. 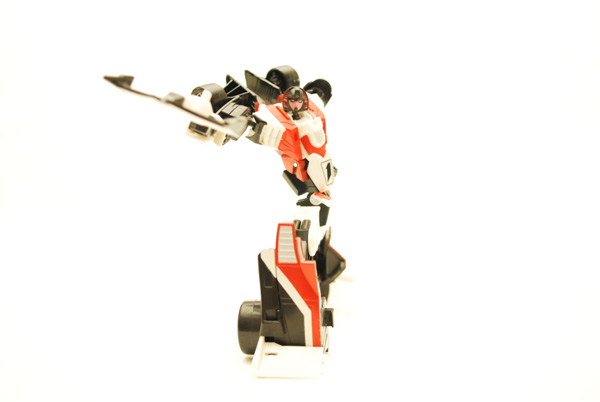 
Although there is no leg twist, the hip joints more than make up for it. Combined with the feet flexibility, leg poses are almost limitless. Add great articulation in the arms and any negative thoughts seem to fade away

: If there's eer a repaint to get, this is the one... especially if you're a Gobots fan!
Size Class:Deluxe, Walmart Exclusive
MSRP:$9.96