After the Transformers G1 anime ran out of steam in 1987, the product followed suit. A lot of figures ended up not being in the limelight, including the Powermasters. One such Powermaster was Getaway. Part of the new wave of Walmart exclusive movie figures is a tribute to this figure, in the form of Breakaway.

Escape-artist extraordinaire Breakaway has never been held in captivity for more than a few hours. Even then, most of the times he's been captures have only been because he let it happen, so he could get inside a Decepticon base and blow it up. Every one of his joints is double, and secret compartments cover his body, hiding dozens of tools for use in escaping from any cell. He's as slippery as a Neutronian grease eel, and clever as a turbofox. Decepticon bounty hunters across the galaxy have an almost supernatural regard for his skill. 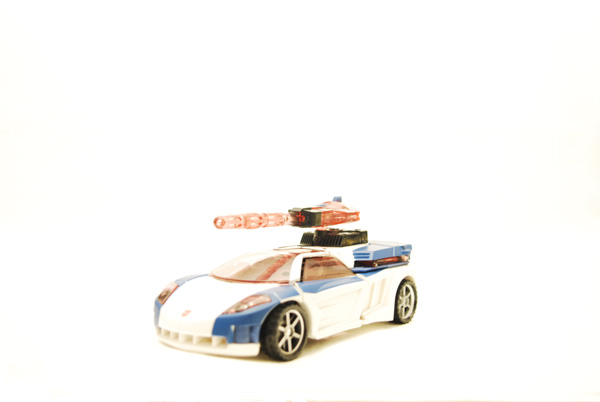 Breakaway is based on the Cybertron Hot Shot mold. The figure is mostly white with blue stripes going down the beltline and across the rear deck. The roofline has some black to it. There is a port for his gun, done in a translucent magenta with a matching launchable missile. The headlights are also done in the same magenta, as well as the cockpit glass. There is a small Autobot insignia on the front end. It's a fair representation of the original G1 figure 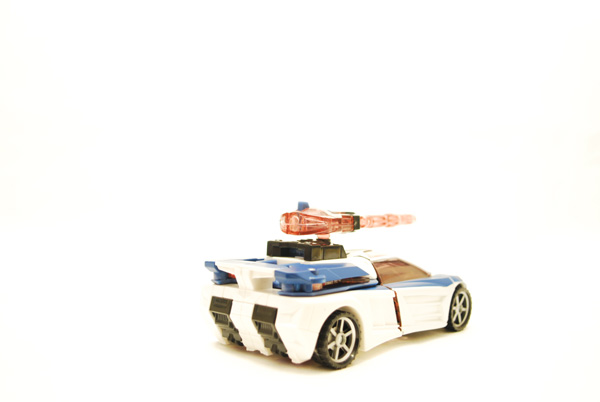 One of the shortcomings of this mold still exists. There is a gap between the doors and the quarterpanels. It doesn't go all the way in to be seamless. Also, the Cyber Key mode is a bit bland. Stick it in the port and 2 aero wings, done in translucent magenta, pop out. It's a nice mold, and still looks good today, but the color scheme comes out looking bland.

Transformation is identical to Hot Shot's. Pull back the legs and flip out the feet. Pull the doors out until they run parallel to the front end. Split the front end in 2 to fold the arms flat. You may need to lift the cockpit glass to do this. Spin the cockpit 180 degrees so the windshield faces the ground. Top it off by spinning the head forward. 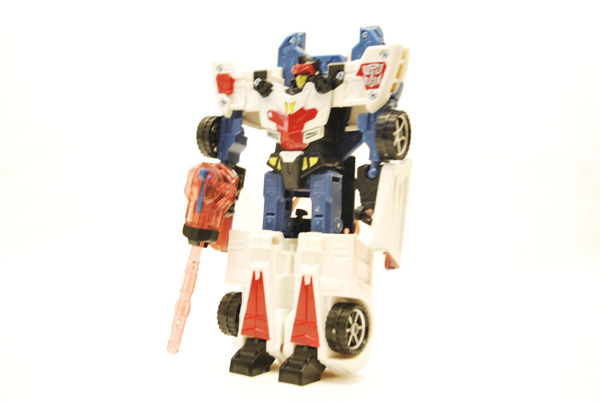 The robot mode is an explosion of color compared to the alt mode. The lower legs have magenta accents along with the white. The upper legs and forearms are done in a cobalt blue. The waist is black along with some neon yellow. The chest features white, magenta and some neon yellow. The shoulders are white with magenta patches. There is a large Autobot symbol on the left shoulder. The face is neon yellow, which makes it look jaundice. 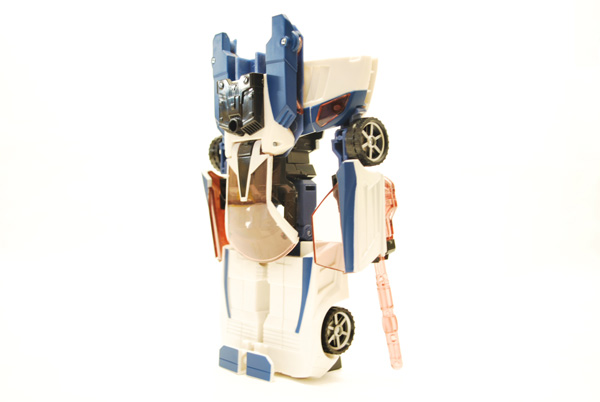 He's definitely a colorful one, but the overall look comes out a bit clumsy. Maybe it's the patches of neon yellow that do it. At any rate, the robot mode itself is pretty slick. It was one of the nicer offerings in Cybertron and still looks decent here. 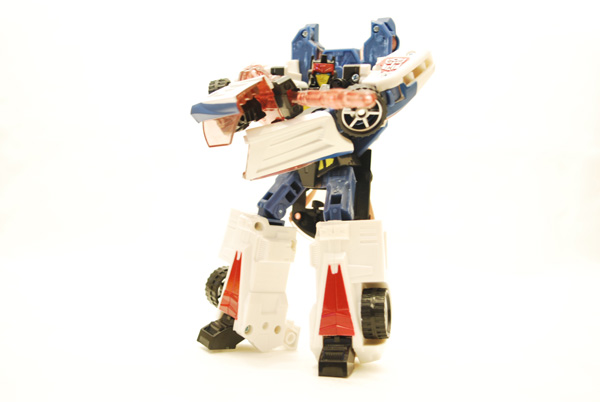 
The figure was always sort of a brick, and there's no exception here. You can get spread from the shoulders, but it looks awkward so I didn't include it in the articulation report.

: It's a decent tribute to Getaway, but also easy to pass up
Size Class:Deluxe, Walmart Exclusive
MSRP:$9.96