Every once in awhile, Hasbro engages in attempts to appease the fandom with repaints in the form of obscure G1 references. The recent Walmart Deluxe wave engages in 3 such appeasements. The 3rd figure for this wave is a Triggercon tribute to Crankcase.

Crankcase doesn't really care about Megatron; he just joined the Decepticons because he was in a bad mood, and it's pretty much lasted. As far as he's concerned, everything is pointless and stupid. He sees no reason why anyone else should be enjoying things when he's so miserable. That's why he spends his time grumpily running things for Autobots and Decepticons alike. He's not much of a warriror, so he specializes in just being inconvenient. His blaster arm causes metal to rust instantly. 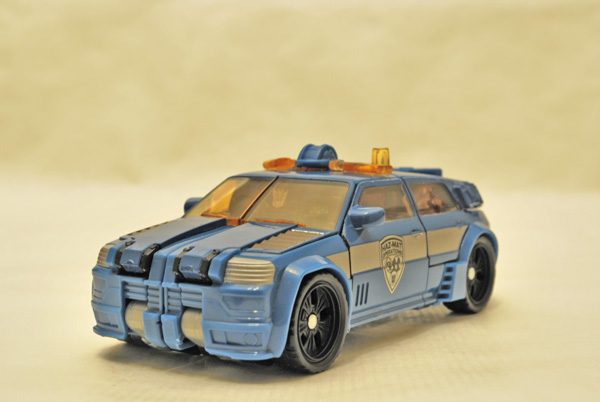 For Crankcase, the mold from Cybertron Red Alert was used. The alt mode is almost all ble with a silver stripe going down each side. Each door wears a shield. The shield contains a biohazard symbol, an hazardous waste symbol and a Decepticon insignia. The shield carries the name Haz-Mat Operations. There are 2 sets of lightbars on the roof, both done in translucent amber. One is an aero type lightbar, while the 2 behind it are beacon style. Inserting the cyber key in the rear slot will pop out the rear windows and expose a pair of cannons 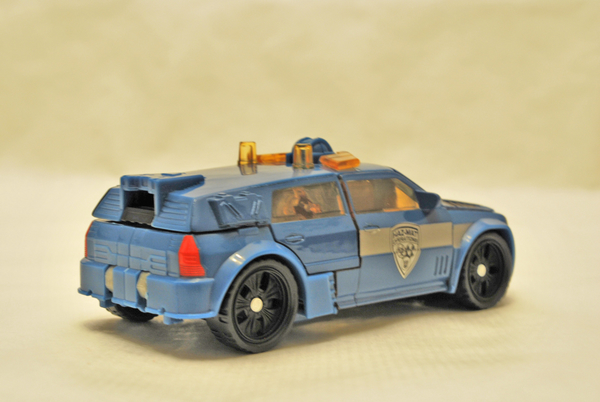 For the most part, I always liked this mold, which loosely resembles a Dodge Magnum. One thing kills it though, and that's the head poking from the roof. Quality Control also rears it's ugly head. While I had a stripe going down both doors on the driver's side, only the passenger's door had a stripe on the passenger's side. At least the rest of the paint apps seem to be there... maybe. Compared to the G1 facsimile, the likeness is lukewarm at best.

Transformation is identical to Red Alert. Pull down on the front end to separate the windshield from the roof, then separate the rear end from the roof panel. Fully pull out the sections from the feet from each corner of the car. Once this is done, you can fold the rear wheels into the rear quarterpanels. Combine the front and rear ends to form the legs. 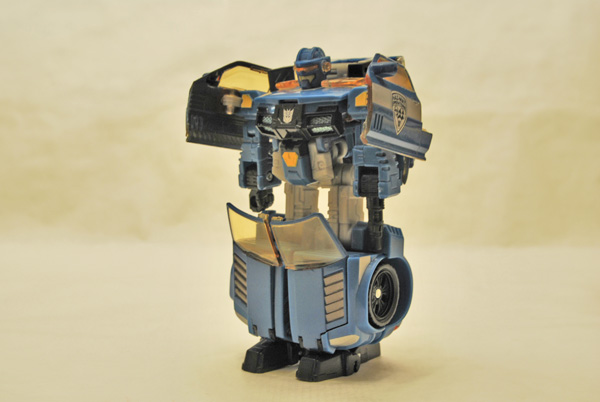 Crankcase in robot mode has a slightly closer resemblance to his Micromaster forefather. PVC gray makes up his thighs and abdomen area. The feet and hands are in black. Some yellow appears on the shoulders and below the chest. The head sculpt is unchange, and features blue and yellow with a yellow visor. 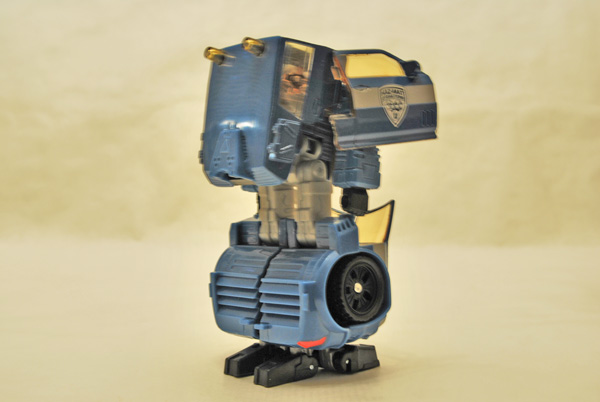 As with Red Alert, there are tools stored in his shins. You can choose from a hammer or a hook, both which attach to the laser barrel on his left arm. The colors go nice with the mold, but it's still a kibble plagued design. The cyber key works in this mode, with the cannons resting on the shoulders. 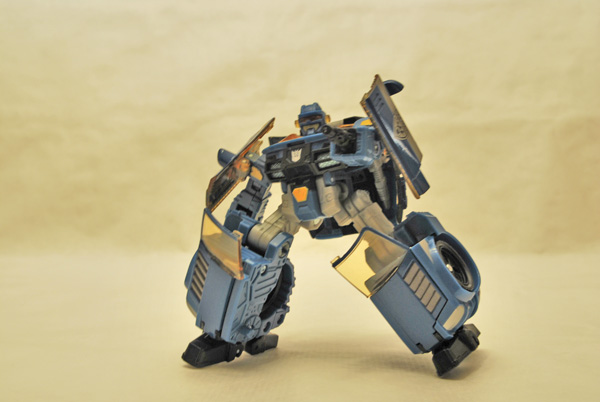 
Seeing this figure again really shows the strides that the TF figures have improved over the last 3 years in terms of articulation. There is no twist for the limbs, and the kibble interferes with posing.

: Posing is sort of a downfall for this figure due to kibble factor.
Overall -

: The better repaint of this mold, but the reference is off and the kibble is still messy.
Size Class:Deluxe, Walmart Exclusive
MSRP:$9.96