For anyone who remembers Ironhide's original mold, we all know that it was a major disappointment. For years, most G1 fans have yearned for a better version of him. Although we've had a couple of attempts, they just haven't captured the embodiment of the veteran warrior. Universe tries their hand at it with their modern G1 take.

Ironhide was built at a time when armor was thick, and circuitry was simple. He is the oldest of the Autobots, tested in thousands of battles, over countless centuries. He has been injured many times, but never deactivated. For every scratch and scar that he bears he has a tale to tell, and most of the younger Autobots are all too eager to hear them. Gruff, and sometimes grumpy, he is also naturally protective of the other Autobots. He is tough, rough, and nearly impossible to damage. 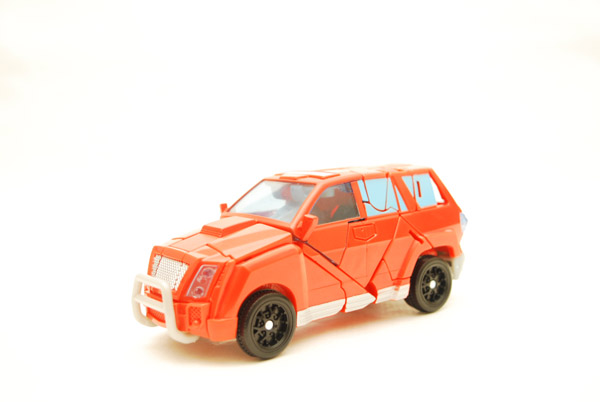 Ironhide goes modern with the alt form of an SUV. True to his G1 self, the color is almost entirely red. The design is somewhere between the GMC Envoy and the Mistubishi Endeavor. There is a brushguard mounted to the front end, running plates on the sides and a gray bumper on the back. The license plate in the back reads OREGON, a nod to the Ark's location in the Marvel comics. While the windshield, rear hatch window and front door windows are clear, the rest of the windows including the sunroof are painted light blue. His weapon for his robot mode stores underneath. 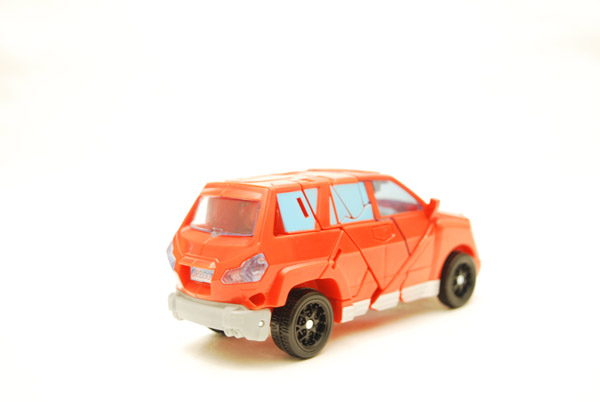 I might have preferred all the windows were painted. The windshield gives glimpse to nothing more than body parts. The design of the vehicle is nice and is highly detailed, with the diamond plate grille and induction cowl on the hood. However, the design is marred by countless seams. Even if the seams fit well together (which they don't), there are several gaping spots in the body. This would include a triangle type hole in the rear window assembly and a nice gap in the bottom of the rear door. The whole aesthetic makes you look like you're viewing him through a broken mirror.

Ironhide is complex, but in a fun way I suppose. Grab the underside of the brushguard and pull it straight up. This will lift the front grille, part of the hood and the windshield up on a common hinge. Fold the brushguard into the hoodpiece. Next, grab each headlight and hinge them up (along with the remaining pieces of the hood) so they also point straight up. Now, flip the front fenders behind and around to form the legs. Twist the waist 180 degrees. Fold the headlights into the fender pieces, then fold in the fenders to form the shins. Fold down the feet, then fold the piece behind the feet up against the lower legs.

Pull out each side of the rear windows to start the arms. The rear wheels fold inward at this point. Tuck in the rear bumper, which will cause the hatch window to fill up with the chestplate. Fold the waist up and into the abdomen area. Pull the rear hatch down to pop open the head and form the chest. Twist the arms so that the windows show on the back side. Fold out the hands and fold down the arms to complete the process. 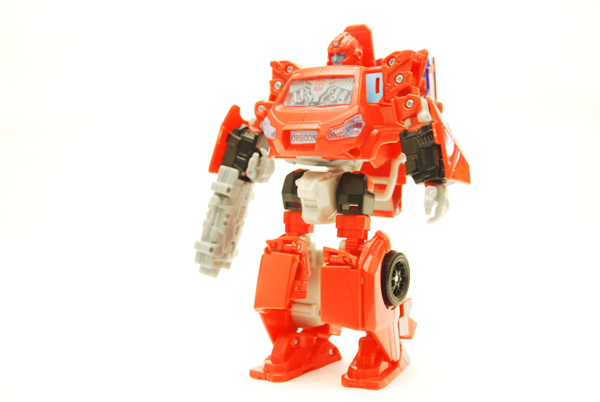 In robot mode, Ironhide falls together nicely for the most part. Black shows up on the thighs and forearms. The chest features a PVC gray interworking of parts with an Autobot insignia. Ironhide can be equipped with a convertible cannon. This cannon can either form a sword (more like a knife) or a gatling cannon. It slides on to either arm by folding the hand in. The head sculpt is very Ironhide in looks, but is blue in color. The light piping for the eyes are also blue. 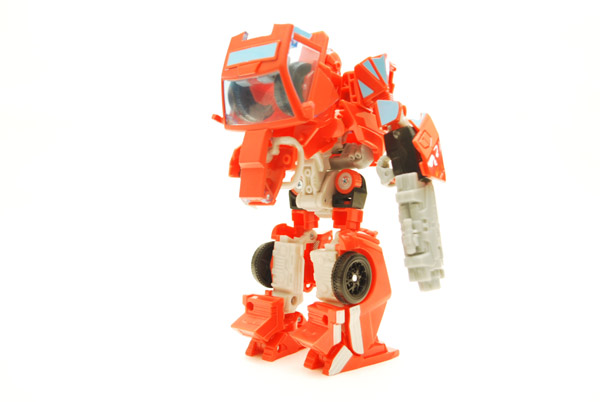 While not looking as fractured in robot mode, Ironhide still has some issues. The backpack for instance isn't very clean looking. The arms are also a bit out of place, as you can see all the screws from the front. It almost makes you think you transformed the arms wrong. Those shortcomings aside, this is indeed a very nice update to Ironhide. 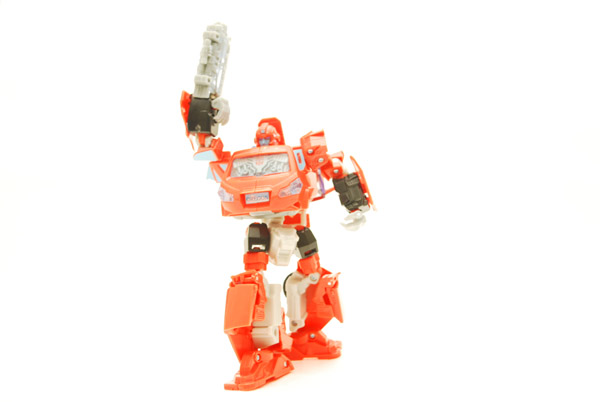 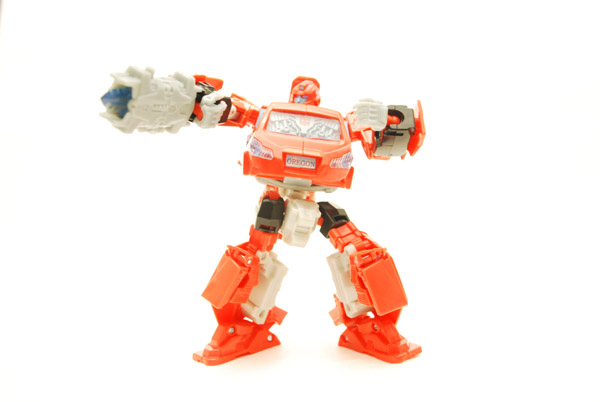 Articulation is somewhat restricted, but you can still pull off some good posing. The head looks like it should come up more, but it can't.

:Nice alt mode design, but it looks like a jigsaw puzzle with a couple of pieces missing
Robot Mode -

:Very nice robot mode with a goofy backpack and some limits on posing. Overall -

: A great buy for the robot mode, but the alt mode might leave you slightly disappointed.
Size Class: Deluxe
MSRP: $11