Universe continues to resurrect more obscure members of the TF universe. They also continue to do a bit of upsizing. On tap this time is the former Micromaster Stormcloud, who is beefed up to Ultra class.

An expert in electronic warfare, Stormcloud prefers to remain high above the battle, raining electromagnetic interference down on his enemies. His on-board communications package is second to none, with the most advanced decryption software in the galaxy, and laser antennas powerful enough to insert data into radio transmissions as they move. He can insert corrupted data into Autobot transmissions without ever needing to intercept them, causing chaos on the battlefield below. 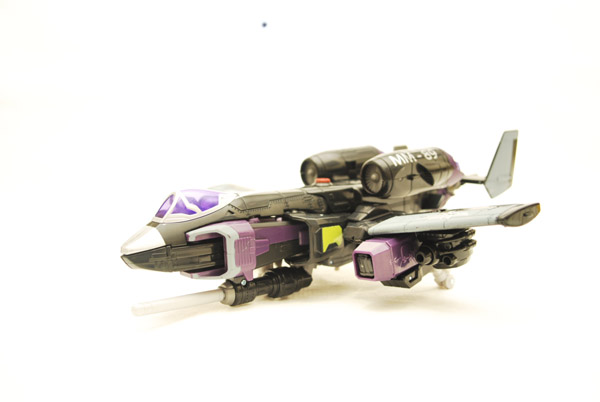 Stormcloud shares his alt mode with Powerglide as an A10 warthog. Instead of white, the main color scheme is black. This somewhat matches his Micromasters paint scheme except it was an even mixture of black and lavender. Instead of lavender, you can find traces of purple in places like the turbines, The wing intakes, the nosecone air inlets and the cockpit. You can also spot a tinge of neon yellow just in front of the fuselage. 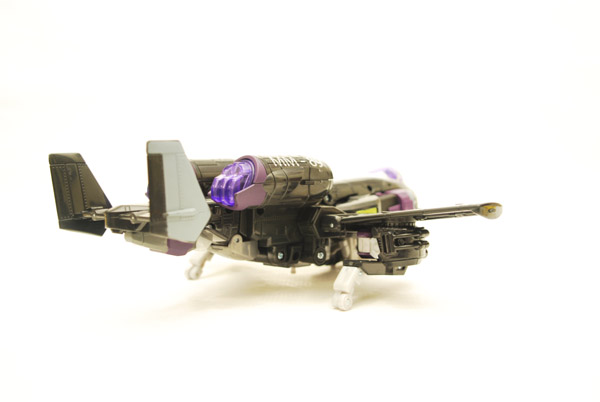 Stormcloud has 2 distinct markings. On the wings, ou can spot a winged Decepticon emblem. On the engines, there is a MM-89 marking. As with other Ultra figures for Universe 2.0, this has a meaning. Simply, it pays tribute to Stormcloud being a Micromaster in 1989. You get the same sound effects with Stormcloud as you do with Powerglide. Same goes for the weapon, which still mounts cock-eyed if using the missile launching half.

Transformation is exact to Powerglide's. After retracting his landing gear and removing his nose gun, fold the tailfins down so there are laying horizontal, then fold the entire tailwing assembly up against the back of the plane. Grab the bottom of the nose and pull down away from the cockpit. Fold the tail of the plane up against the top, then continue folding back the bottom half of the plane. You'll hear a transform sound in the process. There is a gray peg on the bottom that locks into a hole. Once that peg is in place, fold the main wings down. Pull the nose forward to extend the legs, fold the legs down then rotate the waist 180 degrees. You can then twist the calves 90 degrees inward and flip down the nose halves which become the feet. Directly above the waist is a small hinged panel. This can be folded up and locked in place. The same goes for the Decepticon shielded panel that is above the engines, except that folds down. Rotate the entire main wing assembly upwards and back, noting that the hinge is kinda stiff. Find the indent on each wing. This connects to a rectangular peg towards the back of the engine. To get the alignment right, make sure the intake vent on the wing is flushed under the rear of the engine. Straighten out the arms, then push down on the landing gear assembly to expose his hands. Flip down the cockpit so it's against his back. Pull the head up from the tailwing assembly, rotate it forward and consider the transformation done 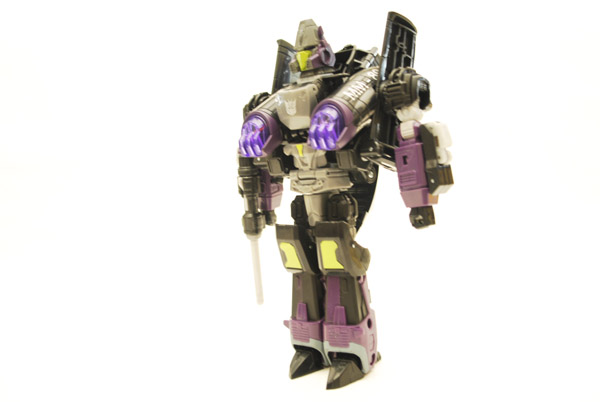 No physical changes to the robot mode of Stormcloud versus Powerglide. The color scheme is still predominantly black, but gray shows up in the chest, abdomen and pelvic region, as well as the upper arms. Another sliver of neon yellow comes up on the abdomen. The forearms are done in purple, as are some of the lower legs. Score another one for Hasbro's QC, as one of his lower legs does not have the purple srtipe it should. 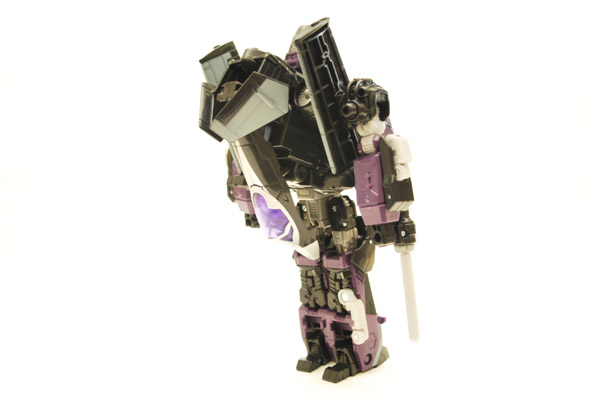 The head, while being Powerglide in nature, is colored true to the Micromaster version it seeks to tribute. The face area is all neon yellow, with the cheeks being purple and the forehead being gray. No change in electronic gimmicks here either, all you get in robot mode is the gunfire. 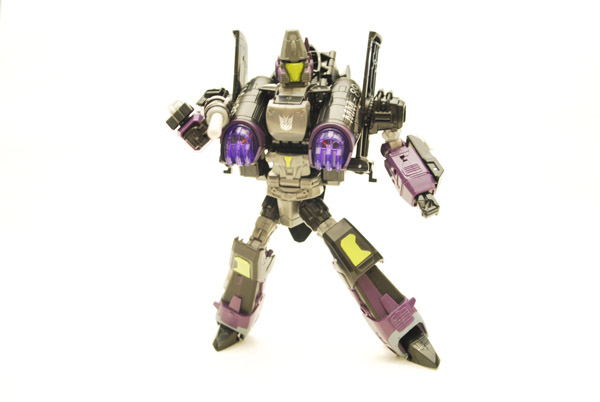 
The cockpit turned backpack is the only obstacle in otherwise good posing.

:You have to admit, black looks better here.
Robot Mode -

:A good mold got better with a more liveble paint scheme Overall -

: For those who liked the look but hated the colors on Powerglide, here's your option.
Size Class: Ultra
MSRP: $27