It doesn't take very long anymore for repaints to inundate the market. Universe is only on it's 8th Deluxe figure and already we've had 3 repaints. However, some repaints are vaunted more than others. In this case, there's just no having Sunstreaker without Sideswipe.

Sideswipe is a natural-born fighter. He's had little formal training in the arts of war, yet he has an instinctive nature that makes him one of the most dangerous warriors among the Autobots. He is not as self-centered or cold blooded as his brother Sunstreaker, but the two are nonetheless close. When they fight side by side, they are truly a force to be reckoned with. 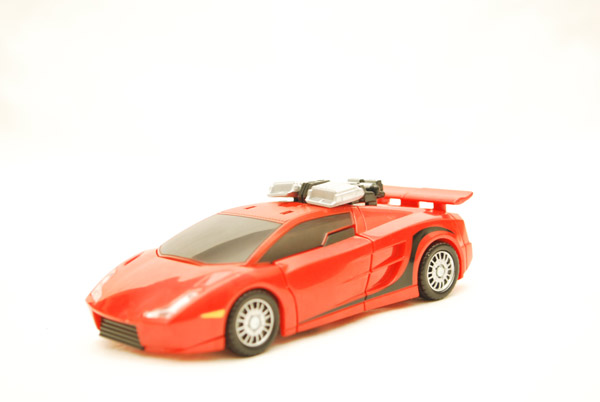 Sideswipe shares his alt form with Sunstreaker. Although they may have the same mold, there are some subtle differences. The most blatant, of course, is the color scheme. Sideswipe is predominantly red. Instead of an Autobot insignia on his roof, he sports a black stripe along his ground effects. Also, you will notice that his roof pack is painted all in silver and black. With Sunstreaker, the vents were left unpainted. 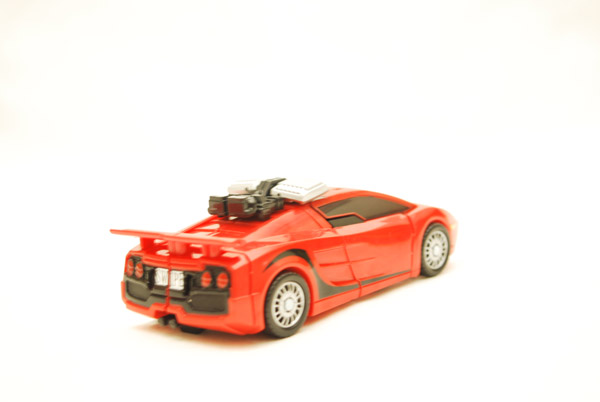 It's a very subtle difference, but the turn marker on the front bumper is amber instead of the orange on Sunstreaker. Perhaps amber on Streaker would have gotten lost on the paint job. The other noticeable difference is in the rear. His back end is painted in black versus Sunstreaker's silver applique. Also, the license plate reads SWIPE. To top off the changes, the tailpipe is painted in black.

Transformation is similar to Sunstreaker, but not exact. First, remove the roof scoop and his exhaust pipe, which becomes his gun. Split the rear taillights into 2 halves and fold them up against the rear quarter panel. Grab underneath the doors and pull gently until they're unhooked. The rear end can now flip over and out to form the legs. Swivel the calves around 90 degrees and flip the feet out to finish the bottom section Rotate the waist 180 degrees. Pull on the front end to extend it outwards. Swivel the arms underneath the cockpit out 180 degrees while keeping the doors faced outwards. 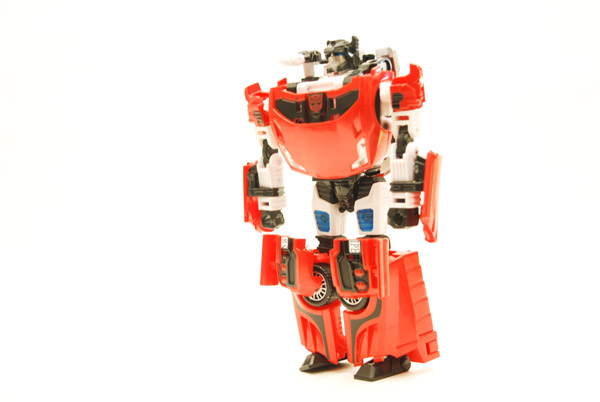 The changes in the robot modes is more than just paint application. There is alot of different details that have changed, though. The thighs on Sideswipe are now white, as well as the arms. The detailinn on the groin area is also different, with Swipe sporting a mostly black paint job with a bit of silver. The shoulders also sport a patch of black. The main difference is that the front end of the car forms Sideswipe's chest versus the roof. There is an Autobot insignia on the upper part of the chest that is surrounded in black. 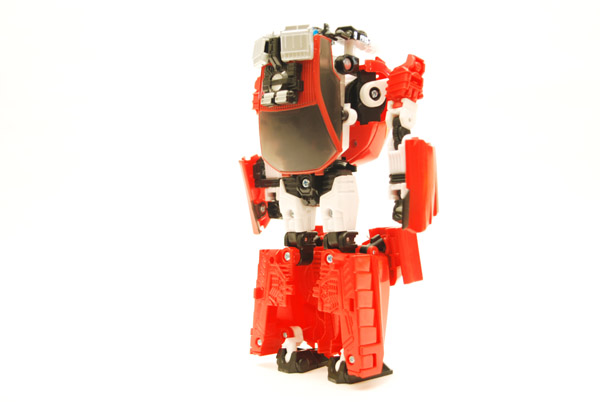 Before we go further, I realize the shoulders are not in correct position. It bothered me that the shoulders were flung so far back. Therefore, I brought them more to the front. It does cock the wheels inside the chest at an angle, but it's hardly noticeable and I think this setup looks loads better. Anyways, for those who think they simply took the retractable ears off of Sunstreaker, think again. Sideswipe sports an entirely different head sculpt. Also, unlike Sunstreaker, the eyes are piped in blue. 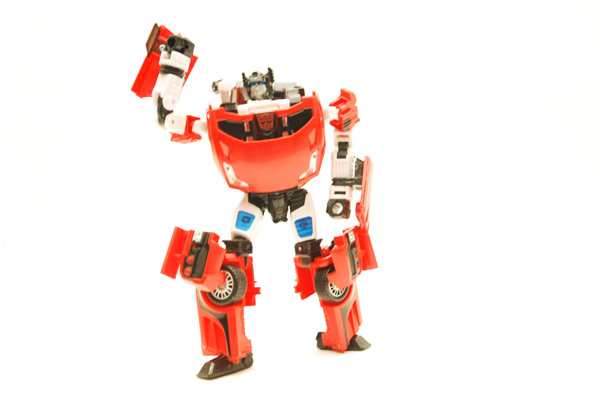 
Sideswipe suffers the same limitations as Sunstreaker in shoulder and hip articulation, unfortnately 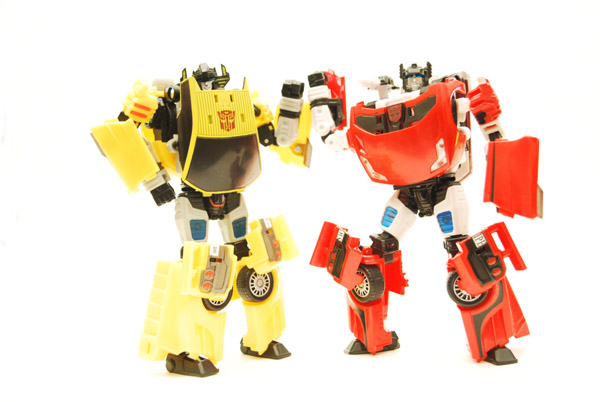 :A repaint, but one that has enough detail changes to stand out. And a great mold to repaint at that.
Robot Mode -

: This is the right way to do a repaint. One can hope that, in the future, more interchangeability is built in to molds destined to be repainted.
Size Class: Deluxe
MSRP: $11