Let the invasion of the clones begin! Starscream had a piece of the Allspark embedded in his forehead, granting him immortality. He used shards from that piece to create clones of himself. Each clone held a key personality trait of the original. First up for release is Skywarp, who inherited Starscream's cowardice. For the toy, he also inherits Starscream's Voyager class release.

"They're headed right for us! Run!"

Skywarp wouldn't call himself a coward. He'd call himself smart. So what if he runs away from combat? Fighting is dangerous! All those missiles and lasers could hurt someone! As a clone of Starscream, he's got all the power and skill of the leader of the Decepticon air forces, but none of the courage or ambition. He could easily be one of the most dangerous Decepticons of all time, but since he screams and runs away the second a shot is fired, he's mostly just a joke. 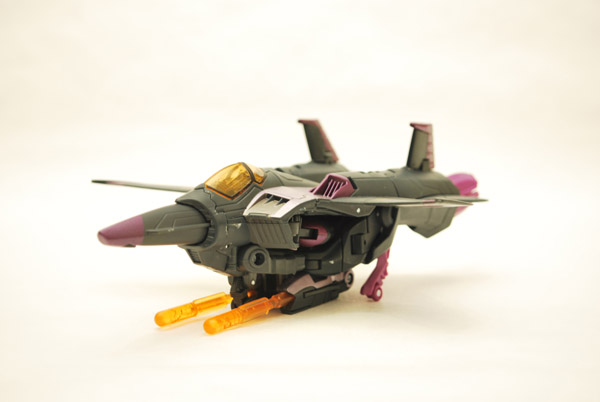 One of the initial complaints about Starscream was that his coloration was more Thundercracker with the blue hue. This isn't so with Skywarp. He features a matte black finish with purple accents in places like the nosecone, air intakes and wings. The area behind the cockpit is silver. There is a gold Decepticon emblems on either wing. 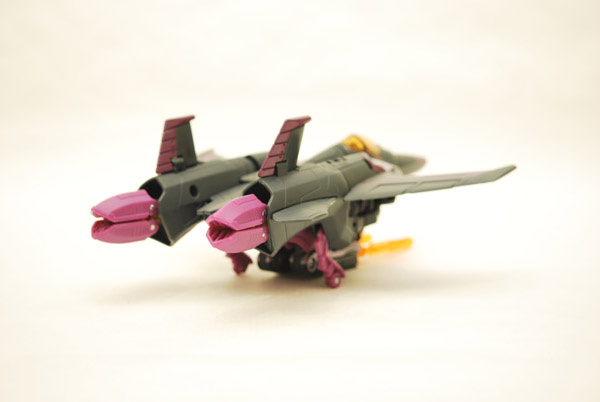 Physically, there are no mold changes between him and Starscream. This includes the launchable missiles, which are orange. Maybe it's because he's shaking with fear, but out of the box this Skywarp seemed incredibly loose. The missile holders kept wanting to limp down and the legs wouldn't stay in place too sturdy. Time to bust out the screwdriver and chalk yet another bad egg up to QC. 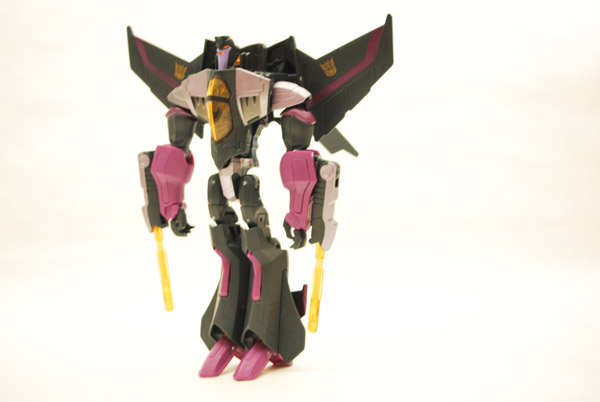 Again, besides coloration changes there are no differences between Starscream and Skywarp. This includes the head sculpt. It's a bummer they didn't put a slightly different facial expression on Skywarp, since a devious smile is something a coward normally doesn't wear. 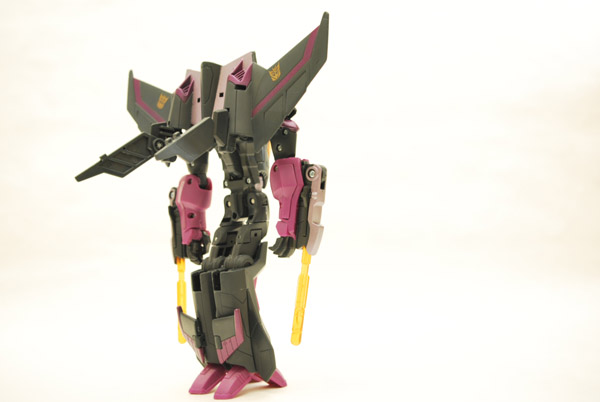 For the most part, the red bits on Starscream are replaced with silver, the black areas replaced with purple and the blue is replaced with black. Skwarp also has the same hidden lasers in his forearms, exposed by pulling the missile launchers forward towards the wrists. 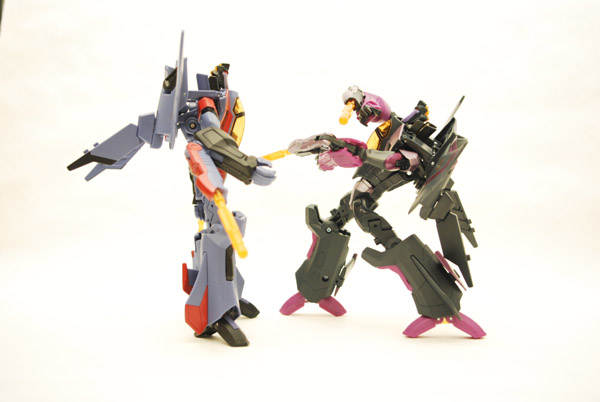 
Very solid poseability, but can be slightly unbalanced. It can easily be overcome with some minor adjustments.

:Great mold for a repaint, has the plus of a true G1 tribute.
Robot Mode -

:Really could have used a different facial expression. Other than that, good stuff. Overall -