Two years ago when Classics 1.0 was on the street, it seemed frustrating to find Jetfire. To this day, there are still fans who could not find the Autobot air guardian. Then Botcon 2007 came and offered a redeco of Jetfire. Now, Universe is offering yet another take of this seemingly rare mold by giving us another Micromaster tribute.

Tread Bolt is a ghost. Though he is an aerial ace, his real talent lies in stealth. Special sensor refractive armor renders him invisible to all but the most sophisticated detection technology. Silent, super precise lasers let him take out enemy spotters before they can shout a warning. More than a few Decepticons have been blown to pieces before they even heard him coming. He has alienated a lot of his fellow Autobots, because when he's not sneaking up on Decepticons, he creeps around scaring the heck out of anyone he can find. 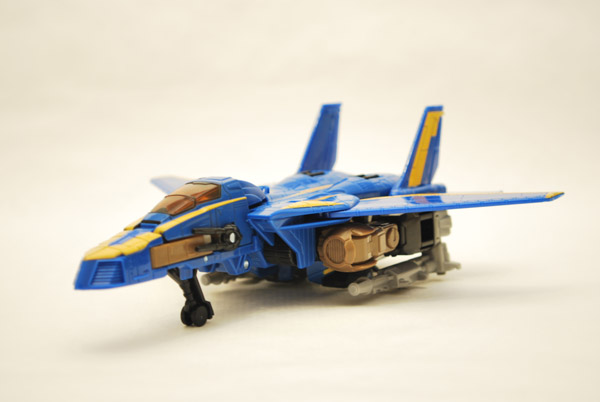 Tread Bolt's alt mode is that of a military jet. The color scheme is mostly blue with yellow pinstriping in various spaces, evoking thoughts of the US Navy Blue Angels aerial team. You an also spot some bronze towards the bottom. All the wings are adjustable, from the fuselage to the tailwings. The engines in the rear also double as his feet in robot mode and retain the split port look. The landing gear is fully retractable. The rear wheels fold up into his belly, the front wheel folds into his nosecone. 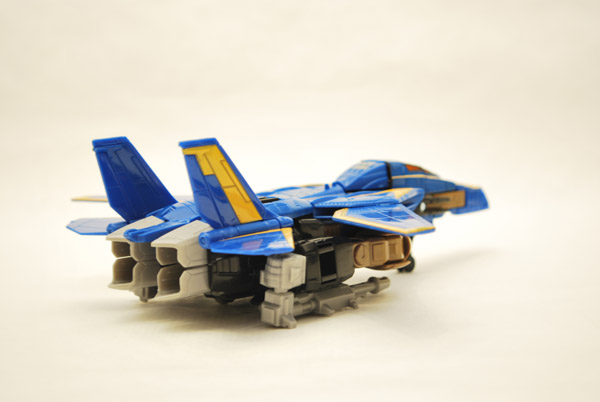 Looking at the front of the jet, there are a pair of double-barreled laser turrets. They have full 360 degree rotating ability and can be independently aimed. There are only 2 things that take away from the look. One is that the large ports for attaching his armor are left showing. His arms are also visible from under the wings. It's too bad they couldn't find a way to retract the hands or else it wouldn't really matter. As it is, this is only a minor quibble. Overall, the look is very sharp. 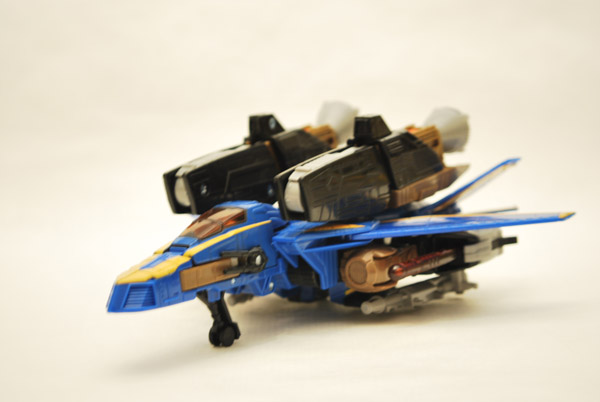 Like Jetfire and Dreadwing, Tread Bolt can armor up with a jet booster and missile launchers. The boosters are black and bronze, with the launchers being PVC Gray. 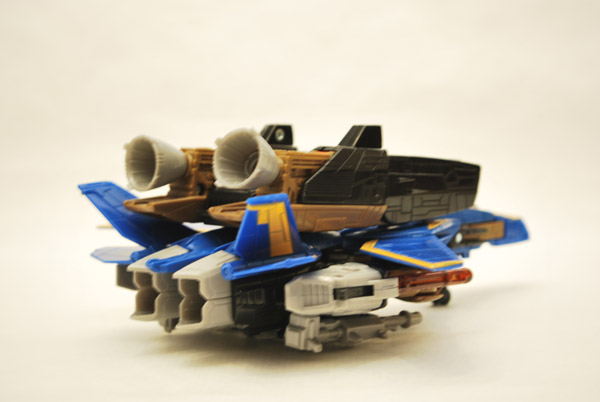 By sliding the top plate on the booster packs back, 2 more laser cannons flip over to the front. That makes 8 laser barrels and 2 missile launchers in total. Tread Shot can be transformed both with and without the armor in place.

Transformation is identical to Jetfire and Dreadwing. Loosen the arms from the pegs on the legs. Pull out the legs and spread out the exhaust ports of the engines to form the feet. In one motion, grab the shoulders and half moon the arms towards the nose of the plane. Sweep the main wings towards the cockpit. Fold up the rear wing assembly and attach the peg to his back. Lift the cockpit forward, spread the nosecone in 2 pieces and lay each piece alongside the cockpit. Fold the cockpit down to form the chest. Adjust the head in place and you're finished. 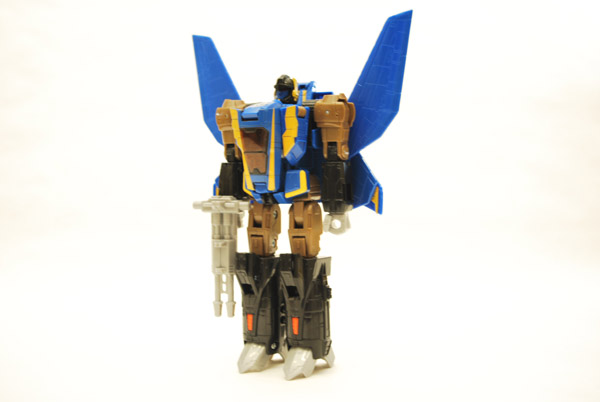 Tread Bolt's robot mode is unchanged from Jetfire's. The laser barrels that attached to his hands in the Armored Alt Mode can combine to form his double barrel laser rifle in Robot mode. The rear wings can either lay them flat or keep them hinged back. It's a matter of personal choice in the end. The head sculpt is also identical to Jetfire's, but the face is painted blue with a black scalp and gold antenna. The eyes are piped in red. 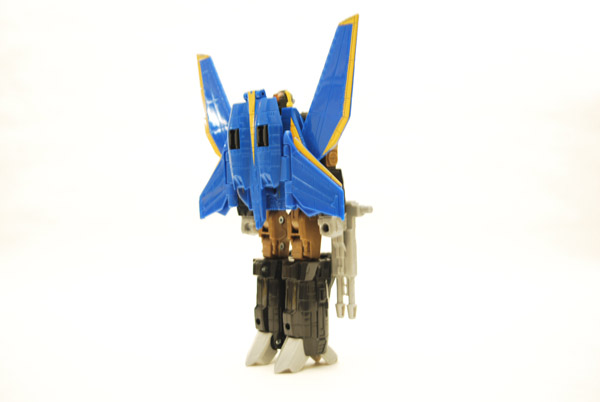 Coloration has some faithfulness to the "Micromaster figure being tributed, but there's more detail. The torso area is blue with the yellow trimmings. The shoulders and thighs are bronze, with the forearms and shins in black. Hands and feet are PVC gray. You will also notice some red on the shins. 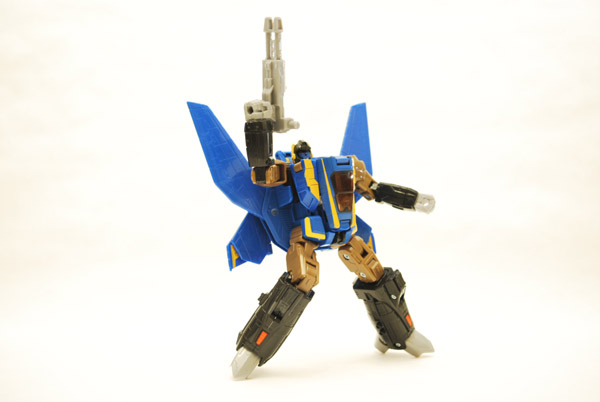 
Overall, poseability is stellar. You may need to move the wings on his back some to get extended shoulder poses. 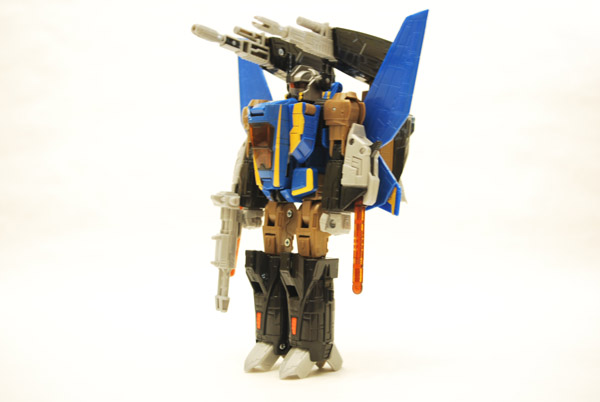 Tread Bolt's helmet incidentally looks like it could make a very good Bruticus head. Note the 'antennae' also form the turrets used on the nose of the Alt mode. One weakness remains in this mode, and that is the back heavy nature when in Armored mode. Therefore, posing becomes somewhat restricted. Other than that, movement itself is not hindered by adding the armor on. 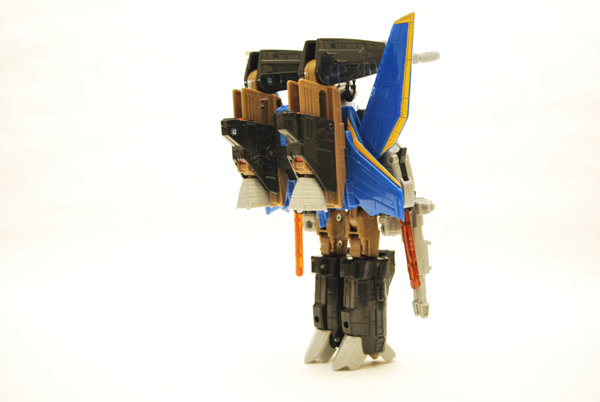 You can extend the gun turrets then fold them over 90 degrees to add shoulder cannons to his arsenal. This, by the way, does help regain some of the lost balance. 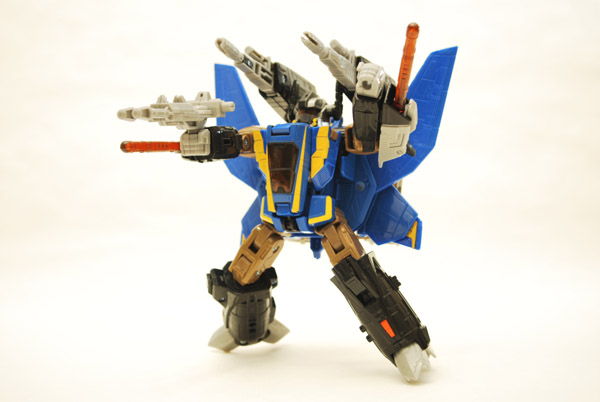 :The head can get lost in all the blue, but otherwise the colors work great here too. Overall -

: Another Micromaster done up in a mold that was hard to come by the first time around and is worth owning
Size Class: Voyager
MSRP: $20