Next up for our Activators coverage is everyone's favorite Dinobot, Grimlock.

One of the first robots brought to life on Earth by the power of the Allspark, Grimlock is the leader of the Dinobots. Though he originally fell prey to the manipulation of Megatron, he now understands that Earth and the Autobots deserve his friendship and protection. There's nothing he enjoys more than melting Decepticons into scrap with his flame breath. 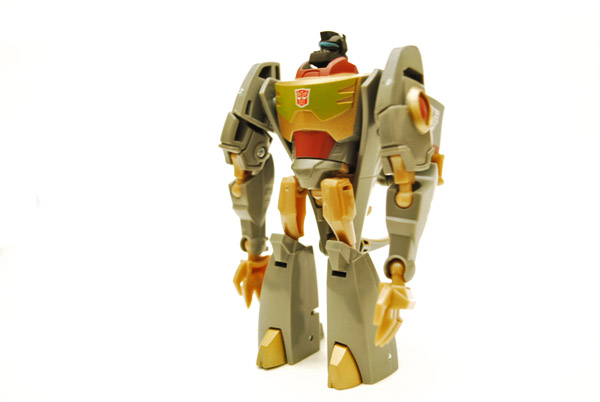 The differences between his Voyager figure and the Activator are more than just size. The coloration is completely different, with the limbs being tan instead of black. The chest also picks up a lime green crest instead of the translucent panel on the Voyager mold. The head sculpts are almost identical. 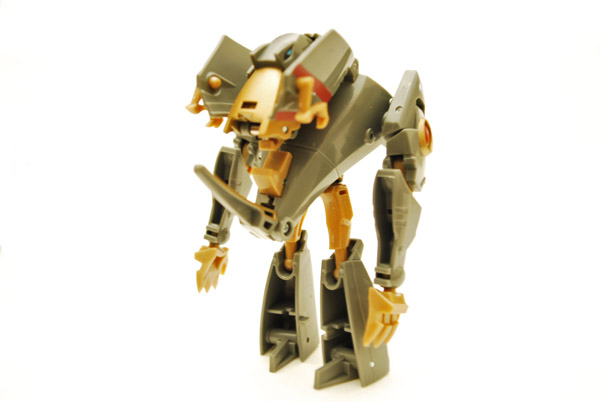 One area where the Activator suffers is in balance. The backpack makes the figure extremely back heavy, so he has a tendency to fall back. The arms also look gangly reaching down well to the shins. 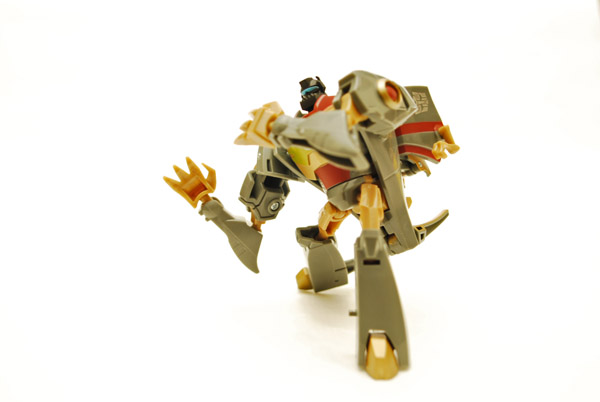 
It's a pity about the gravity issue because the joints are set up very well here. As with Megatron, the legs are restricted a bit due to the tail assembly.

Position the arms so they are out in front, bent slightly with the palms facing out. Fold the feet back then connect the legs with the tab on the lower portion. Grabbing the back, push the legs up so the chest collapses. Once the chest has flipped in, and while still holding the legs up, flip out Grimlock's dino head and then flip that entire assembly forward to lock the body in place. Finish it off by folding down the tail. The activator trigger is located at the base of his tail to change him back to robot mode. 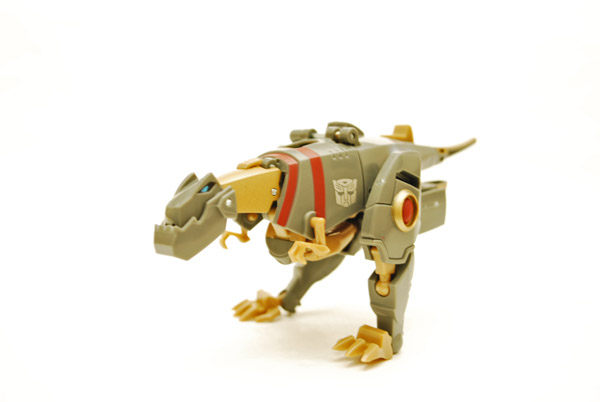 The similarities in alt mode between the Voyager and Activator figures are more apparent. The Activator's jaw is pinned to open, but is not spring loaded. This could be considered a good thing. As well as having an Autobot symbol on the left thigh, there is another symbol viewed through a window on his back. 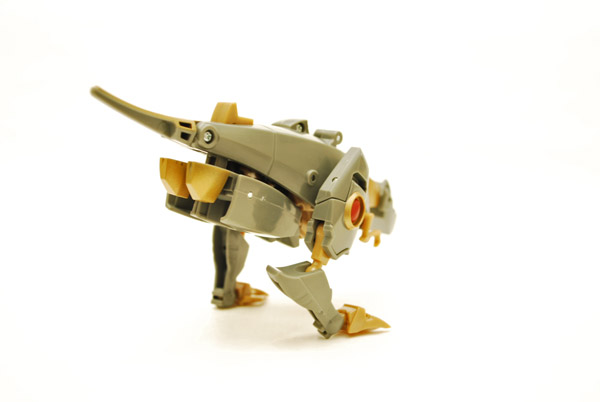 The stubby dino arms are pinned so they can rotate around. Some people have expressed a preference to the Activator mold due to it's aesthetics. For me, this might have held true if not for the robot legs being somewhat of an eyesore on the underbelly. It tends to ruin the lines going back to the tail.

: Too back heavy, which makes it hard to pose. Arms are disproportionate.
Alt Mode -

:The Activators are still a bit pricey, but they are nailing down the designs a bit better.
Size Class: Activator
MSRP: $9