Season 2 offered more nostalgia of the Generation One kind. Appearing in the episode Society of Ultimate Villains, Swindle was the arms dealer who did has his name suggested, and did it quite well.

Swindle is a one-robot black market. he's only a Decepticon by default, since they're the ones who most often take advantage of his unbeatable deals on armor, weapons and combat systems. If it shoots, explodes, or focuses light into a beam intense enough to melt high-grade armor, Swindle will sell it to anyone. Anyone who can pay his price, that is. Most of his inventory, he scavenges from those who fall in battle, but he doesn't mind helping a crippled Autobot all the way to the scrap heap before stripping him of his weapons. 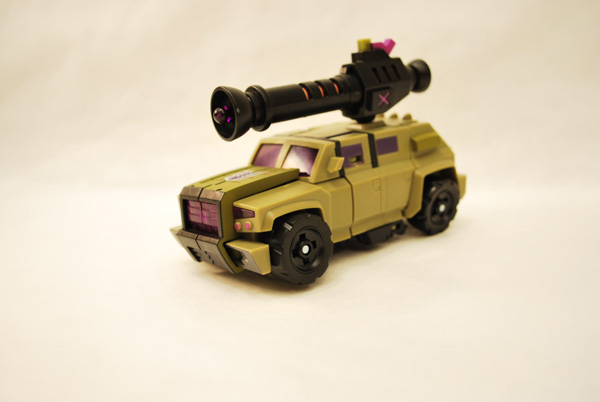 It seems that even in the future, New Detroit will have need for large, cumbersome SUVs. Swindle resembles one of these vehicles. The paint job is olive green with a black front bumper. The grille is done in translucent purple, as is the windshield. The side windows are simply painted in purple. You'll find a large Decepticon insignia on his hood. On the roof, he sports a large cannon. 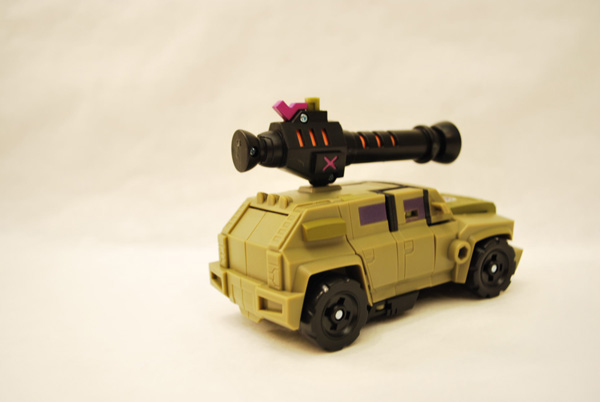 As great as the vehicle mode looks on the surface, it does have some flaws. The windows on the side differ in size and throw the look off. The black supports on the sides and the roof don't help to limit the disproportion. Although there are a lot of details built into the mold, hardly any of them are highlighted. Being an SUV, the belly lurks very low to the ground, so it's a good idea to make sure you roll him on a smooth surface. A major gripe is that the rear end doesn't latch on to the side very well, which causes some separation. Another gripe is with the cannon mount. The peg is actually hexagonal, so the cannon always looks off-center when facing forward.

Swindle sports a rather inventive transformation that has some ties to, of all figures, the recent Legend class Universe Brawn. First, pull the rear end down and forward to form the legs. Make sure the shins snap into place with the knees. Fold the rear wheels inward. Pull the rear doors up in a gullwing fashion, then tilt the roof section which supports the doors back. Separate the hood by splitting it in half, then fold the front doors up in a similar gullwing fashion.

Fold up the belly piece to form the chest. Fold the arms down, then twist the forearms so the Decepticon half-symbols face out. Flip the grille piece outward to form his fingers. Then, take the hood and hinge it 180 degrees outward into his forearms. He also has thumbs, which need to be folded outward. Finish it up by flipping out his head from behind the roof panel. Swindle's cannon fits onto another hexagonal peg on his right arm. 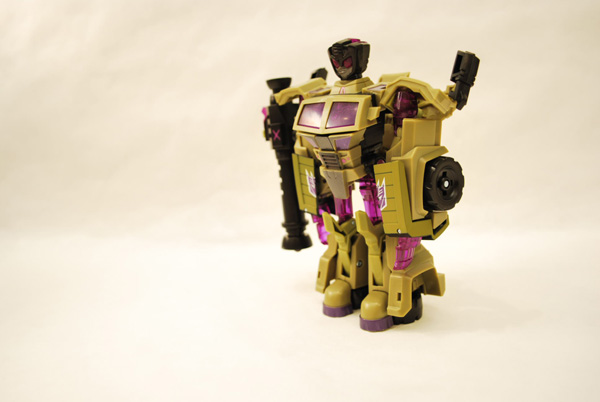 the show likeness in bot mode, like most of the others, is top notch. The upper limbs are all done in translucent purple, giving the figure a more sinister look. The head sculpt is especially impressive. Not only are the eyes piped purple, but they even have the cat-like retinas as depicted in the show. 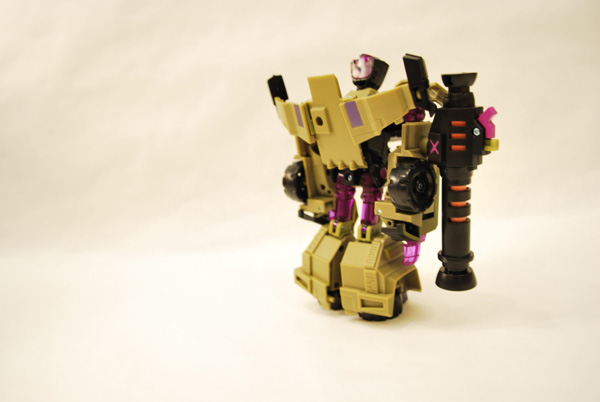 That being said, this should have been a Voyager. The figure just looks small in scale with some of the other figures out there. Also, the joints were ridiculously sloppy on mine and I had a hard time keeping the arms up. The left shoulder in particular was completely gimped. Without the joint issues, this figure is otherwise great. Small... but great.

One final note on his bot mode. He does have a "super" mode of sorts. If you pull down his abdomen and rotate a black piece, you can expose a gatling gun. The winglets on the back also rotate upward, and the black pieces on the end rotate forward to represent his Gyro Missiles. 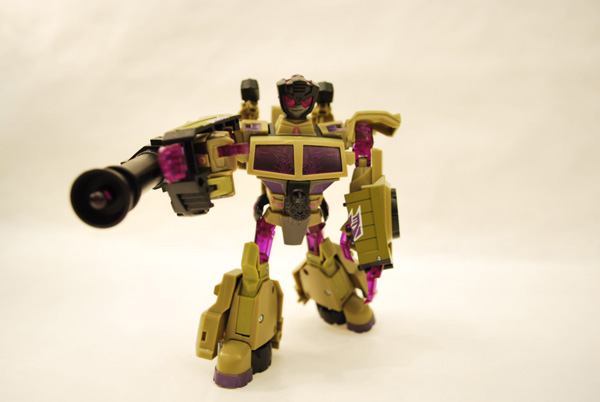 
The legs are limited due to hip and pelvis kibble. The shoulders are interesting as you have to use a combination of the ball joint and pin to achieve a desired pose... if the ball joint can hold the weight.

:Sloppy joints and some hindrance of leg joints. Overall -

: For the size, it's a pretty good effort. Were it a Voyager, it would have been stellar.
Size Class:Deluxe
MSRP: $11