Remember Blurr? The fastest car on wheels... but he was a hovercar? Blurr has made a comeback true to G1 form and this time he DOES have wheels! First appearing in the Season 2 episode "Velocity", Blurr finally revealed himself as an Elite Guard spy.

Blurr never stops moving. It's a habit he's gained over centuries of working as an undercover agent for the Autobot Elite Guard. Constant mobility is the best way to avoid detection by Decepticon agents. He is used to remaining in vehicle mode for months or years at a time - as long as it takes to complete his mission, learn what he needs to know, and escape. Unfortunately, because he spends so much time alone, he's not really used to talking so others can understand him. 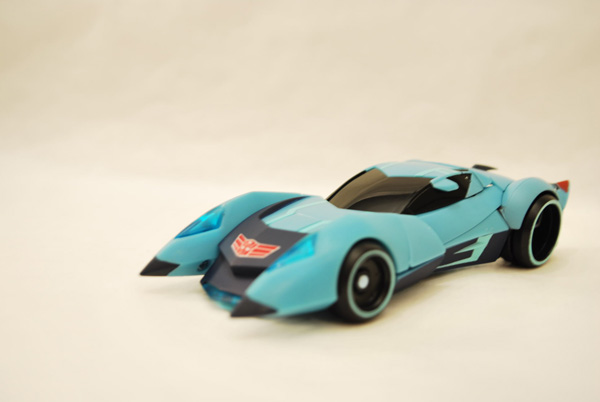 For this series, Blurr takes the guise of an earth type sports car. The look has similarities to the Mach 5 from Speed Racer. There are several hues of blue used on the car. The main body is a baby blue, with navy blue on the ground effects and front end. There are also stripes of light cyan on the hood and roof. You'll also notice the Elite Guard shield on his front end. 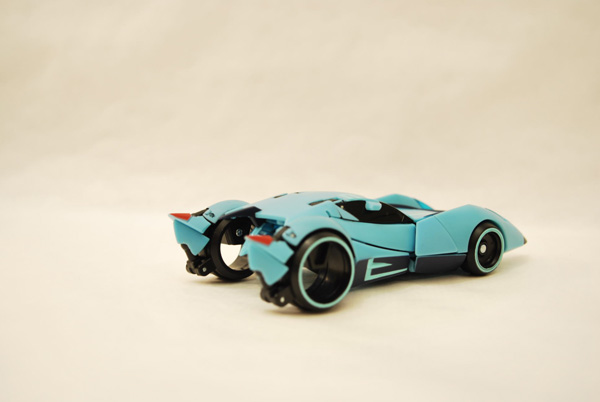 The vehicle looks great from the front, with details such as intake vents below the doors and roof mounted mirrors. However, it falls apart in the back. This is because, technically, there is no back. The rear end is completely open, although the head is camouflaged enough so you don't notice it... much. The rear wheels are also open-rimmed, There is a tread molded in the wheel to allow rolling, but it's flimsy. Pushing a tab directly behind the blue bonnet will pop out an energon saw. Note that you will have to pick the car up off the ground to activate it.

Start by gently pulling all four corners of the vehicle away from the center. The hood can then be popped off of 2 holding pins. Fold down the rear end at both sides 90 degrees. While gently pressing the dark blue ground panels in, gently pull the front fenders out to dislodge the pins. Wedge down the light blue panels below the side glass to dislodge the arms. You can then execute a half moon movement to connect the front fenders to the rear of the car.

Rotate the rear end (which becomes the legs) 180 degrees then straighten the legs out so they're parallel with the vehicle. Fold out the tailfins on both sides to form the feet. Spin the arms downward, then turn the forearms outward to expose the hands. The hood has a peg which can attach to either arm to form his shield. Fold the panel behind the roof so that it folds on the back. Turn the head to complete the transformation. 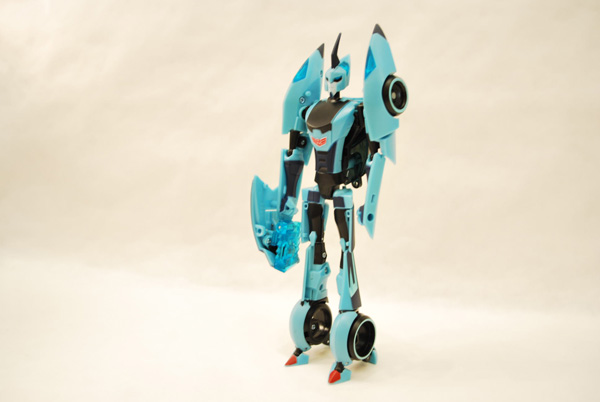 Show likeness, again, is very accurate. The figure has a very tall and lanky look, similar to Lockdown. The head sculpt looks a bit off, almost like he hasn't had any sleep. There is light piping, but you have to get the light to shine through the "vents" on the sides of his head. 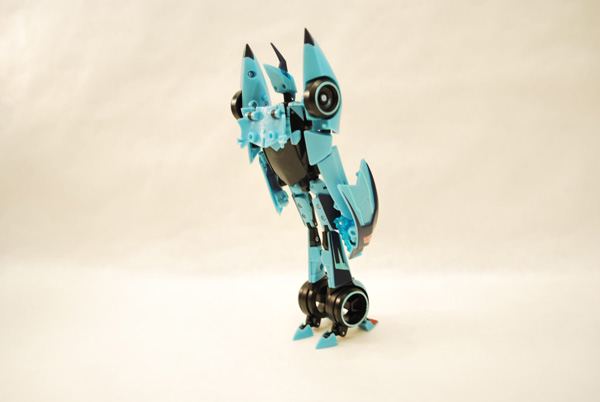 The Energon saw function works with the shield when in robot mode as well. It might just be me, but the saw itself looks rather unimpressive. The design allows the saw to act as a front spoiler, so it doesn't translate terribly well into an actual saw. One piece of good news is that, for the first time in awhile, all the joints are rather stiff. 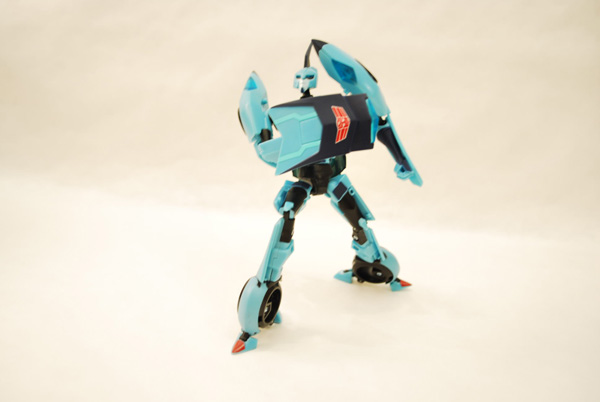 
There is no swivel ability on the legs, but the waist articulation makes up for this. Overall, a very solid poser.

: It's always one detail that underwhelms a mold. It's a pity, because with a concealed rear end this could have been a pure 10.
Size Class:Deluxe
MSRP: $11