Cyclonus might have been a lapdog in the G1 days, but man that jet mode he had in the show looked awesome! It didn't translate into a toy very well. In fact, the toy looked underwhelming in comparison. For those longing for a more show-accurate version, your time has come. For the 25th Anniversary line, Hasbro has updated Cyclonus, Targetmaster and all.

Constructed from the cast-off chassis of deactivated Decepticon warriors, Cyclonus was programmed by Unicron to be loyal only to Galvatron. Powered by nuclear engines, and a small fragment of his creator's supernatural power, Cyclonus wields enough might to sterilize the surface of an inhabited world by himself. He never unleashes this power without his commander's leave, however, and he focuses all of his energy on ensuring that Galvatron is obeyed without question by those under his command. 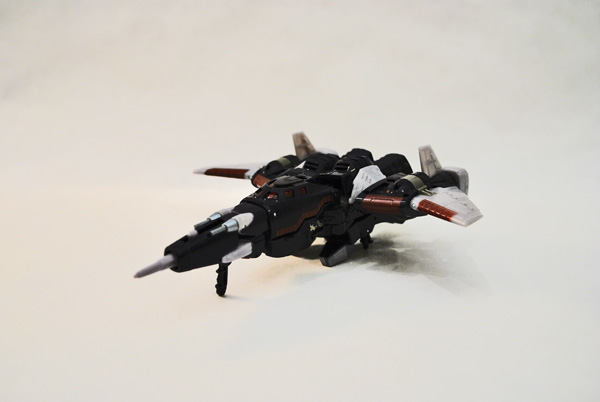 Cyclonus is a Cybertronian style jet. The color scheme is primary a very deep purple with various gray plastic. Gray appears on the tailfins, jets, main wings and nosecone. The nosecone is a welcome addition, being that the original had a very flat nose that looked awful. You'll also find rust colored appliques along the sides and on the fuselage. 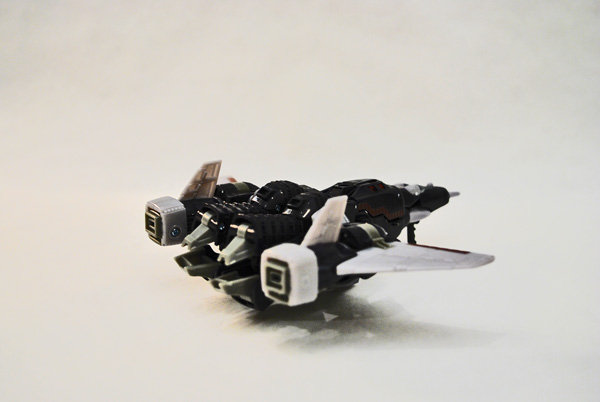 Cyclonus features 3 point landing gear, although it has static wheels. While overall lightyears ahead of the original, there are still glitches. The rear section tends to look piecemeal with various gaps. The left side of the cockpit supposedly contains kill stamps. I couldn't tell because they looked like paint blotches to me. Before moving to transformation, let's take a moment to look at his Nebulan partner Nightstick, who is not mentioned in his bio. 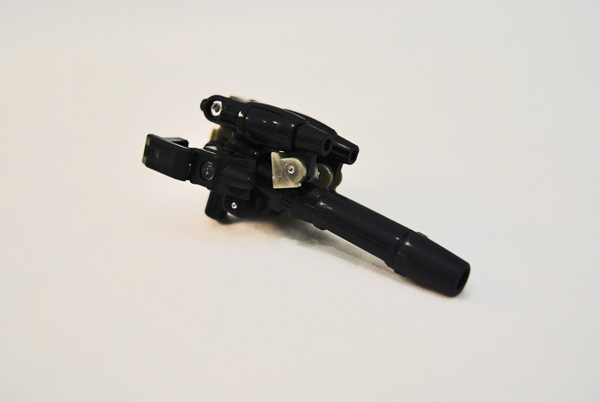 Nightstick is binary-bonded to Cyclonus and serves as his hand weapon. In weapon mode, he is s single barrel laser cannon. The cannon is the same deep purple as Cyclonus with some gray PVC showing in various spots. The peg (or grip) can be inserted behind the cockpit when Cyclonus is in alt mode. To transform into robot mode, grab the 2 top 'barrels' and flip them back, noting that this is a double hinged movement. Flip the barrel back and flip the feet down. 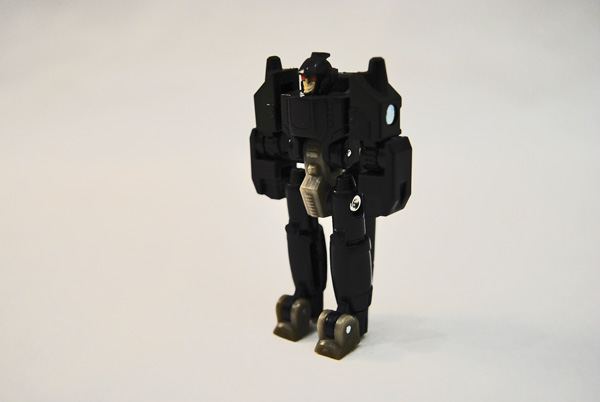 For a small guy, Nightstick does have some looks to him. The face silver with red painted eyes. The rest of the robot remains the purple/gray. Leg articulation is limited to pin hinges on the hips, although each leg can move independently. The shoulders and elbows are pin hinged as well for minicon-like poseability.

The transformation for Cyclonus is very slick, indeed. After folding up his landing gear, you will find a lever on the nosecone that will retract the tip of the nosecone. You can also push the tip in without resistance. Next, lift up the cockpit, fold the nose into the cockpit, and lower the cockpit back down. Separate the wings from the body of the jet. Rotate the wings180 degrees, then rotate the thruster assemblies 180 degrees as well. The assemblies lock into the sides of the cockpit via a tab.

The legs are cantilevered. Pull each half away from each other, down, then lock them together in place once extended. Fold out the feet. Loosen the wings from the thrusters. Grab each thruster and pull down to extend the arms. Rotate the forearms 180 degrees so the tailfins face away from the body. Push the front side of the thruster in to uncatch the fists, then rotate the fists out 180 degrees. In a 2 hinged movement, fold the main wings into themselves to rest on his back. Rotate the head to finish things up. 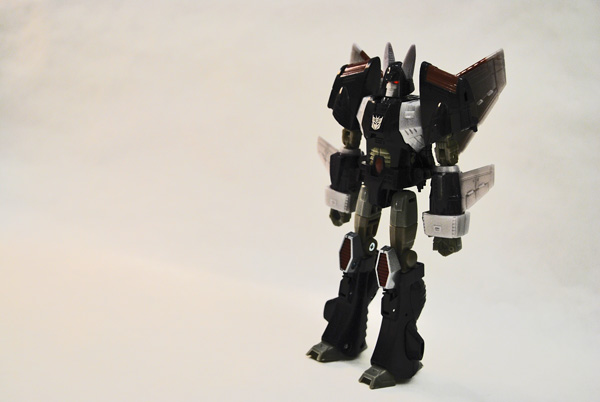 I have to admit, I was pretty much in awe once I got him in robot mode. He is everything you could hope Cyclonus could be in his G1 form. A little more rust color shows up on the abdomen, as well as some more gray. Contrary to the "official" shots, the gray parts are all a uniform color. 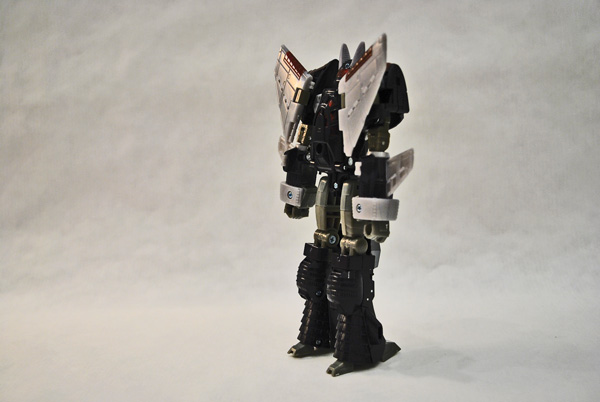 The head sculpt is very accurate to the G1 anime and has red piped eyes. His right fist is bored out to accept his Nebulan partner in weapon mode. This is normally where I lodge any complaints or nuances about the robot mode. I'm sorry, I just can't bring myself to find any. 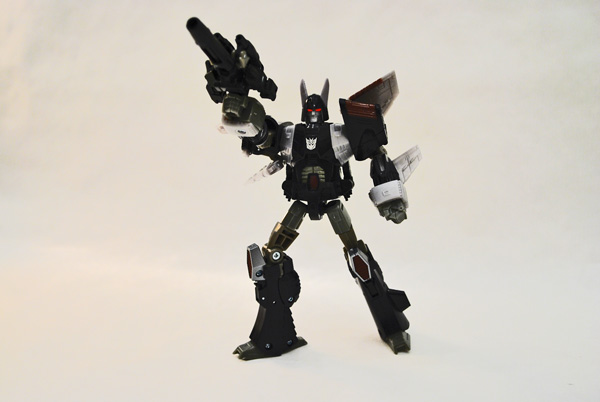 
No waist articulation is my only complaint about the robot mode.

:Only someone who abhors the G1 universe wouldn't want to own this figure. Put this one at the top of your list!
Size Class:Deluxe
MSRP: $11