Since his introduction in the Beast Wars series in 1995, Cheetor has been redone several times by Hasbro. However, each subsequent release has seemed to capture less awe from the fans. The 2000 release of Supreme Cheetor especially drew groans. The Universe line attempts to once again give fans a version of Cheetor they really want.

Cheetor has always been fast. Other robots move at speeds that seem agonizingly slow to him, as if they were trapped in tar. Unfortunately, a lot of the time he moves a lot faster than he thinks, and finds himself in situations that, in retrospect, could have been avoided. Still, his speed has gotten him out of a lot more jams than it's gotten him into, and when speed isn't enough he can always break out his blades. 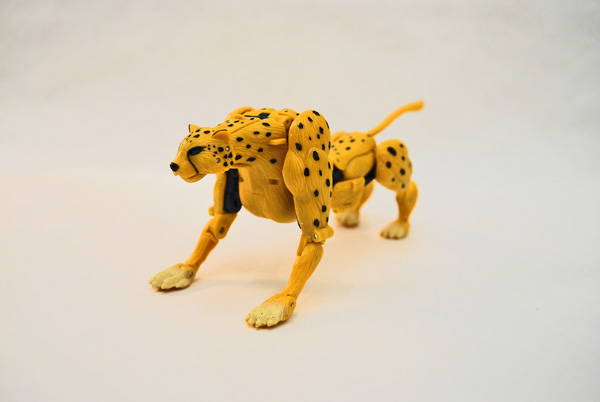 Cheetor is, of course, a cheetah. Compared with the other offerings, this is perhaps the most realistic alt mode of any. From the head to the tail, most of the lines are consistent of what you would perceive as a real cheetah looking. This includes the color, which is yellow with black spots. 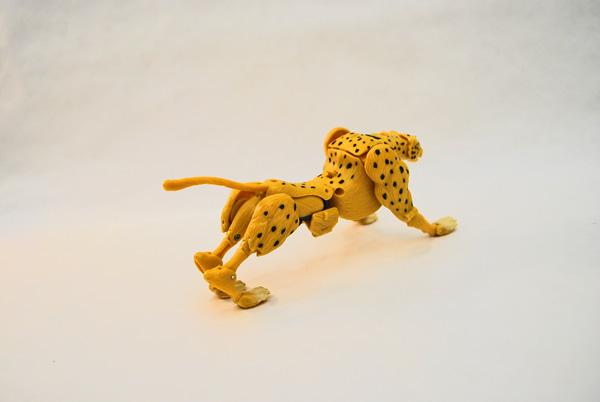 As this mold proves, it's difficult to get a perfect looking beast mode from something that turns into a robot. The belly section suffers the worst, with folding panels that are reminiscent of Cybertron Leobreaker. One neat feature is the head. The eyes are normally green. By pressing back on a level located on his back, you can make him 'roar' (no noise) and his eyes will turn red. Bummer the head is permanently facing down.

Begin by flipping up a panel located on the back of his neck. This will lead to an inner panel that you can flip out 180 degrees so his front legs stick straight up. Once done, pull the front legs away until you have extended yet another panel. You can then position the legs back down and fold the main panel back in. This will give his legs an "extended width". Flip down the 2 side panels on his belly, then pull up on the panel on his back.

In a motion similar to Leobreaker, flip the rear end around until the Maximal insignia rests below the cheetah's head. Fold his haunches on his rear legs so they make a flatter foot, then straighten out the knees. Twist the arms so that the ball joint can groove and let the arms lay flat on his side. Fold the front feet up against the forearms. Pull the tail from it's current position and plce in either hand as a club. Pull back on a tab just behind the cheetah's head to expose the robot head. 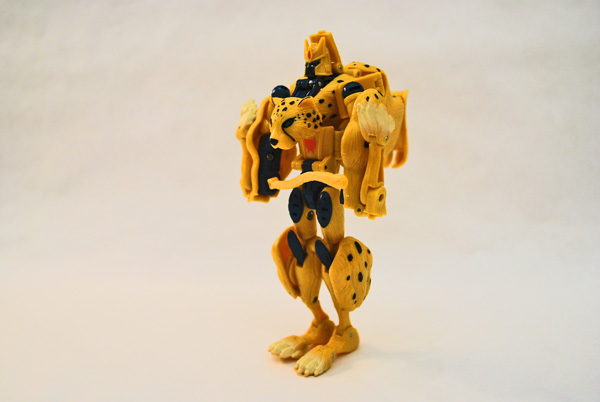 While the alt mode has been stronger than most previous attempts, the robot mode seems to be be subpar versus those same peers. Gunmetal blue makes more of an appearance in the limbs and pelvic areas. One place where they got the robot mode spot on was the head sculpt, which has an animalistic feel to it but closely resembles the original Beast Wars head sculpt. On the side of each thigh, you will find a foldable 3 blade star. 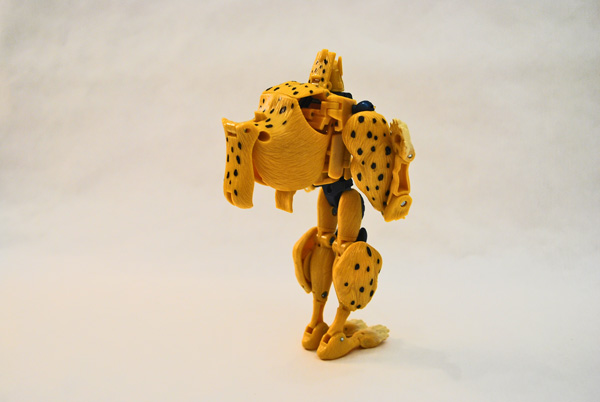 The fact that the stars are very loose on in his fists is just one of the complaints. This figure suffers gravely from kibble. the front legs sticking out from the arms is an immediate eyesore, but the convoluted mess that is his backpack is even worse looking than Ironhide's. It makes him look like a hunchback. It also tends to interfere with balance. 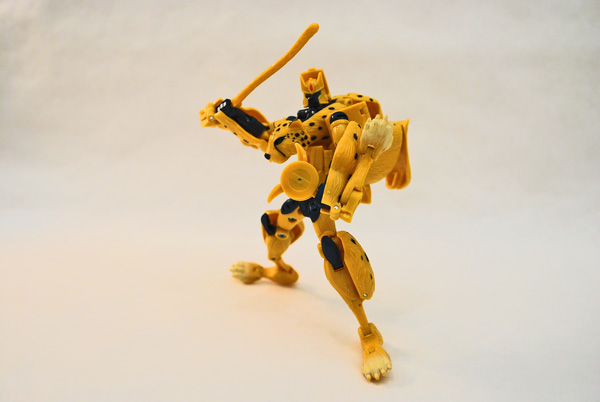 
Arm kibble will hinder posing a bit, as well the aforementioned backpack.

:Another attempt by Hasbro to span the best of both worlds... another failed attempt.
Size Class:Deluxe
MSRP: $11