Waspinator could never catch a break when he was on Beast Wars. Whether he was getting fired upon or being pummeled by some force of nature, bad luck always followed him. His luck doesn't change much for the Animated series. Once a promising Autobot Elite Guard cadet, he was framed as a double agent and imprisoned. Insane by being locked up, he was experimented upon by Blackarachnia. Now, he's out for revenge against Bumblebee.

Driven crazy by years locked in an Autobot prison, Waspinator is determined to take revenge on the robot who put him there - Bumblebee. Now, after bizarre experiments conducted by Blackarachnia, he finally has the power to make his vengeance a reality. He has come to Earth hunting the Autobot speedster, and he will not stop until Bumblebee is a pole of smoking scrap. 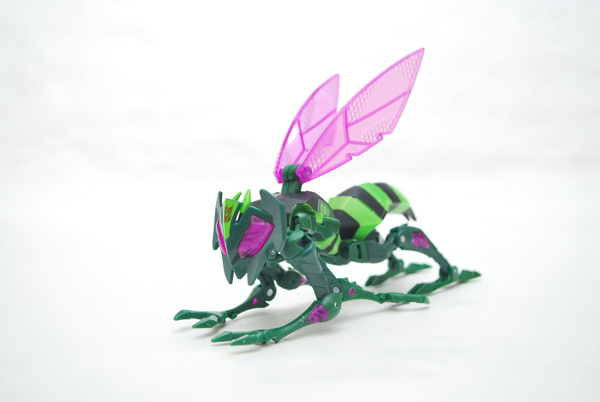 Waspinator was originally a twin to Bumblebee before his mutation. Now, he resembles a wasp. He is a combination of lime green and dark green with black. His abdomen is painted lime green with black stripes. Translucent purple is visible on the wings and eyes, as well as on various spots on his limbs. He has a Decepticon insignia on his forehead. 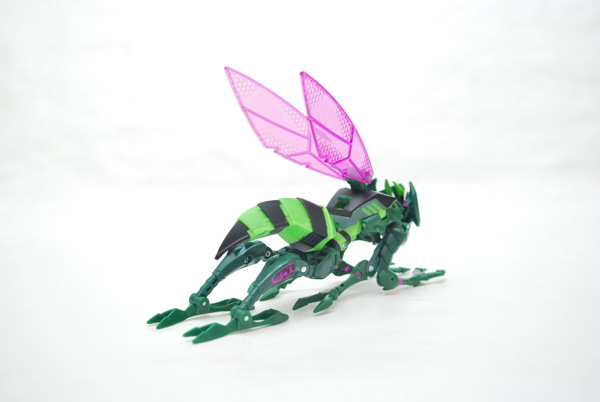 All 6 legs are hinged for good poseability. For added playability,there is a lever on his back which "flaps" his wings. The lever is spring loaded, so the wings will return to the original position. The abdomen is also on a hinge, so you can position him for a stinger attack. If there's any minus, it's that the wasp head is fixed and cannot be moved around. Overall, a good effort.

It doesn't take much to transform this figure. Start by pushing the abdomen up against his back. Straighten out the rear legs so they are linear to the body. The pair of front legs merge together to form the arms and attach via a system of pegs and interlocking tabs. Pull the arms out and back. You'll see a false set of arms inside the chest area. Carefully fold them down until they extend outward (they come off the ball joint easily).

Twist the arms just below the shoulder 90 degrees outward. Pull down the wasp head, separating the forehead section, so it forms his chest. Once in place, you can fold in the two false arms just underneath the chest. Flip both wings around so they rest above his head. Move his head forward to finish up. 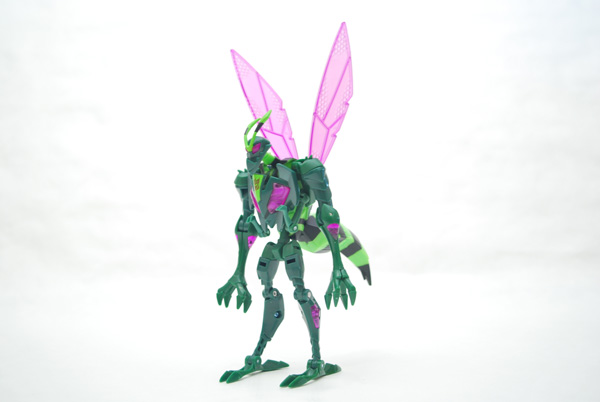 Wasp is just as menacing looking in robot mode as in beast mode. No new coloration comes out, but the dark green takes command in the front view. The face mold is pretty plain looking, but does feature purple light piping for the eyes. They antennae are rubber, so they can be moved around. 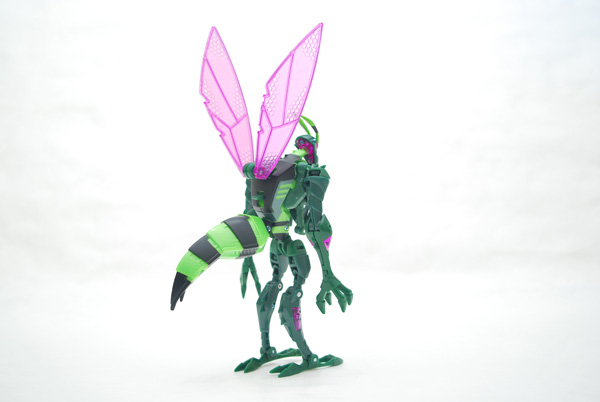 Although I'm normally not a fan of beastformers, I have to say this one has some appeal to me. He's simplistic, yet has pretty good form. Even though his stinger hangs out back quite a bit, he has a large enough footprint to hold steady. 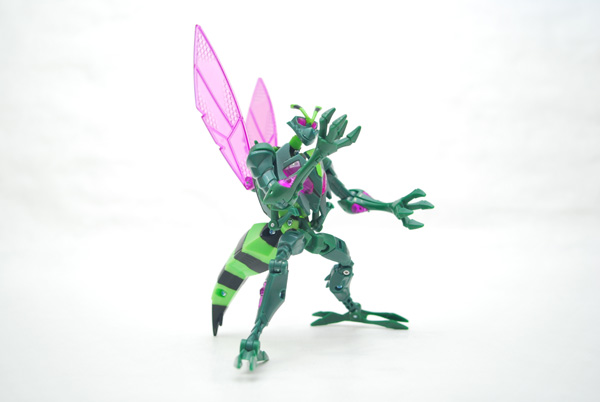 
Excellent joint setup, coupled with a large footprint, make posing one of the best in this series.

: Definitely worth picking up. It might be simple, but it packs plenty of enjoyment.
Size Class:Deluxe
MSRP: $11