Anymore, Hasbro likes playing "Gotcha!" with fans. Remember during the movie series when they released the Premium subline with more realistic paint? They're doing it again with Animated, this time giving us an upgraded Prowl after already releasing him as the first wave. So is this newer version worth picking up as well?

"The road to enlightenment is paved with deactivated enemies"

With Lockdown returning again and again to plague the Autobots, Prowl is determined to take him down, once and for all. To combat the Decepticon bounty hunter, he upgrades his body to its ultimate limit, adding weapons and armor until nothing Lockdown can do will stop him 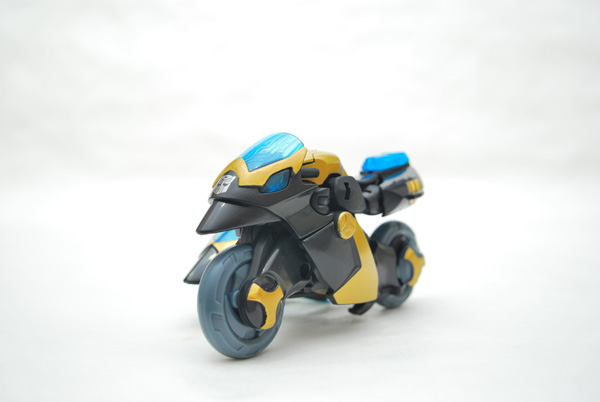 Surprisingly, there are some very subtle mold changes to Prowl. Starting from the front, you'll notice a mudguard extension on the front. The visor also gets changed, now using a translucent blue "circuit" type windscreen versus the clear. He also adds some new decor to his fenders, with a mockup of his ninja star now appearing towards the top. The main addition, of course, is the sidecar. Two tabs, one on the right fender and one on the rear wheel, attach the sidecar. While the sidecar looks good from the front, it is completely empty inside. 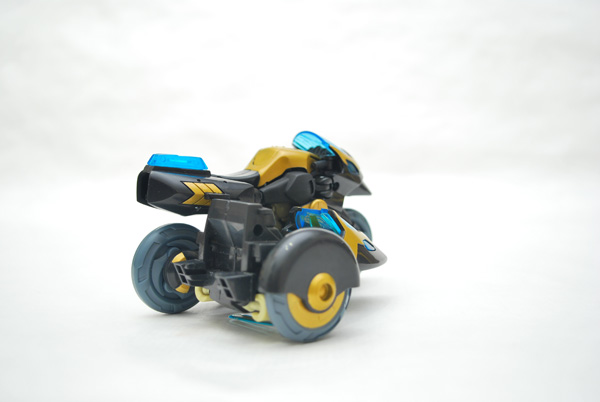 There are also detractions with the upgrades. Gone are the dual colored lightbars on the rear. Instead, you have to make do with a pair of translucent blue bars. The ninja stars are also gone. Both front and rear wheels have mockups of the stars, but neither are removeable. The sword piece that's used in robot mode drags to the floor a bit, so be careful. Finally, the wheel on the sidecar is only rotatable on the outside. 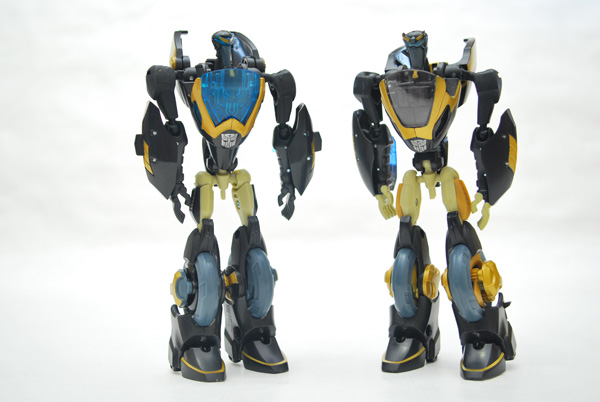 There are a few subtle differences between the original's and Samurai's standard robot modes. The paint is lacking a bit, with the hips and hands being unpainted. Also, despite rumors stating that Prowl's hands would be remolded, they are still the same. One nice upgrade is with the head, where Samurai now sports a translucent blue visor instead of a painted visor. Alas, there is still no light piping.

Transformation to his basic robot mode is exactly the same as with the original. To transform the sidecar to merge with Prowl, hold out both of Prowl's arms. Remove the wheel from the sidecar (held on by 2 tabs. The fenders, which were previously stationary, now pivot up. You will then expose a pair of slots. Use the tabs behind the seatback of the sidecar to slide into the slots. Be aware that the slots are merely a guide, and will not hold up the sidecar throughout the rest of the transformation process.

While holding the sidecar in place, flip down both side panels of the sidecar, then rotate the panels down and forward to create his thigh guards. Separate the sidecar windscreen in two, flip them around to the front, then bend each half back so the visor meets up with the chest. The visor halves love to pop off of their ball joints, so be careful. Once these steps are done, the sidecar can support itself. Line up the helmet so it fits over Prowl's head. Flip out the sword from the sidecar wheel. The wheel turned shield can fit on a tab located on either forearm. 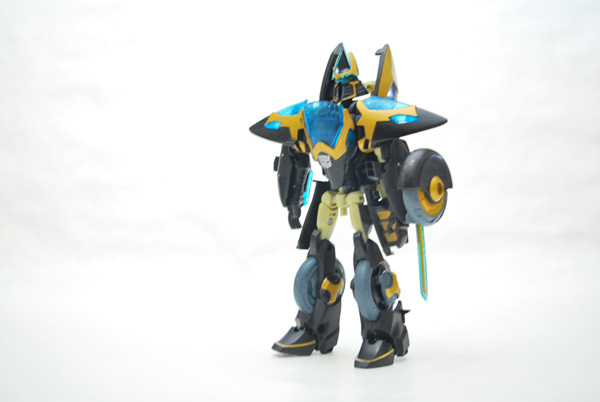 The samurai armor goes a long way to beef up Prowl's look. The circuit pattern on the bike windscreen (now his chest) is also on the sidecar visor, which gives the whole chest a circuit traced look. The helmet is nicely done, but it almost completely hide's Prowl's head. You have to look hard to spot his mouth and jaw. 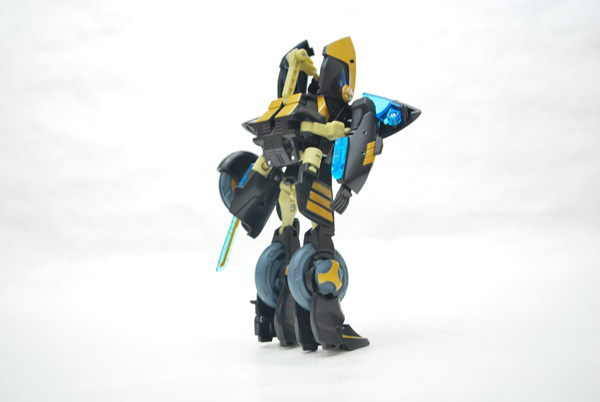 The sword is not detachable from the shield, and looks pretty meager in comparison to the rest of his armor. Since the sidecar folds around Prowl, there is no backpack effect on the balancing. The only catch is that due to the "arm" for the helmet, his head is now stationary. 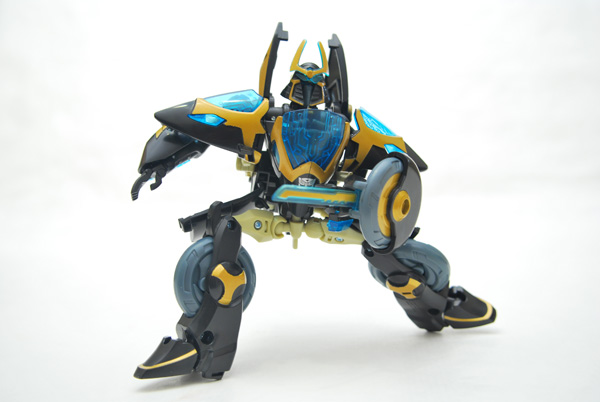 
The armor hinders movement a bit, especially in the shoulder region.

:Some nice detail changes to the bike, but the sidecar lacks in substance
Robot Mode -

:Loss of some details, as well as the ninja starts, hurts. Doesn't help that articulation is decreased. Overall -

: If you never found the original Prowl, this one is a good substitute. For those who have the original, this probably isn't worth a duplication.
Size Class:Deluxe
MSRP: $11