Not really sure what to call this guy. 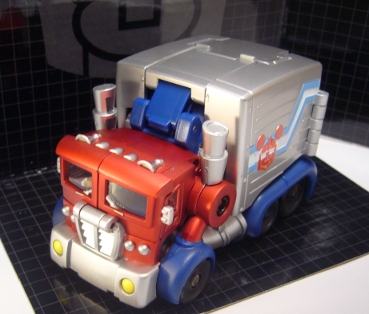 We are treated to a super-deformed cartoony Gen 1 Optimus Prime rig and trailer combo. When in truck mode, a small Mickey Mouse lowers into the driver's seat, located on the right-hand side of the cab. The doors of the trailer open, primarily as part of the transformation but they do also function as doors in this mode. 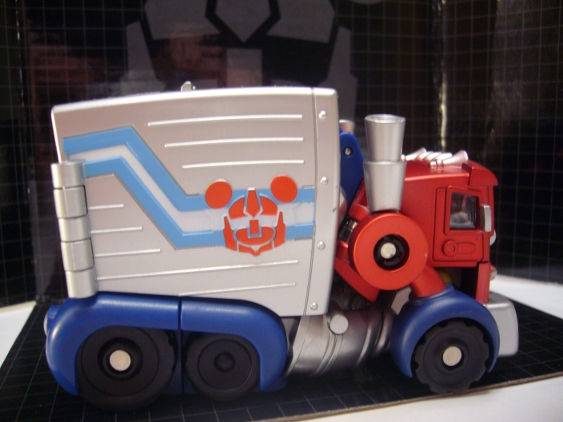 The trailer has raised “Prime stripes” and a Disney-fied Autobot symbol. The paint apps on the trailer, cab, and the internal Mickey are all superb. A portion of what will become the head in robot mode pokes out of the top of the trailer (above the cab). The front and rear wheels are functional, with one set of dummy wheels in between. It rolls nicely but with no traction. 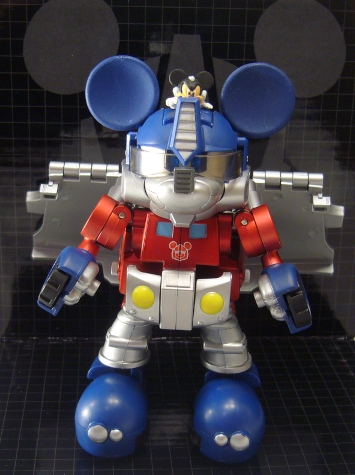 Standing a little over 4” tall, Optimickey is smaller than some expected. More great paint apps here, but very little articulation. The figure pops into a nicely displayable postion and pretty much stays there. 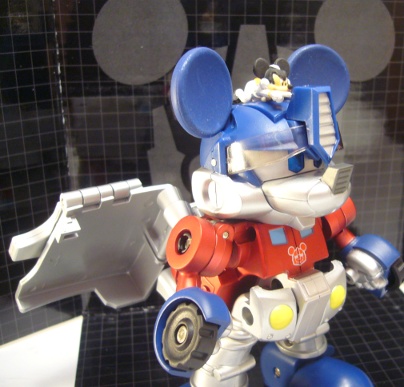 Hanging from the back of the figure's neck, the trailer forms a set of wings. Unfortunately, this just amounts to the entire alt mode hanging off his back, a full 2" out from the body of the figure, which creates a bulky, awkward look from the side or back. 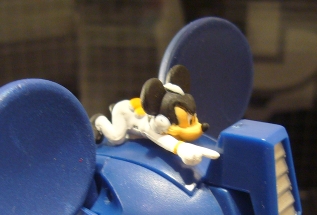 On top of the figure's head lays another miniature Mickey Mouse. Clad in a white jumpsuit with black ears, this unfortunate color combination makes him appear suspiciously akin to a bird dropping on the robot's head. Despite this handicap, Mini Mickey points forward, seemingly directing the cuddly behemoth. The small Mickey can be flipped back into the head if desired, but is spring loaded to appear in robot mode. Also of note, the clear visor of the Mickybot is on a hinge and can be pulled up above the eyes. 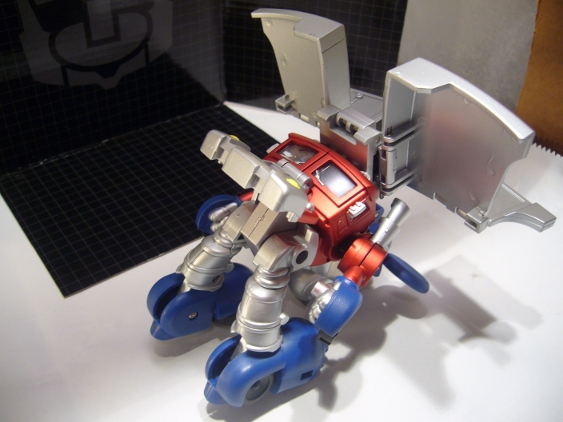 From its backpack position, the trailer folds up above the head like a hood and envelops it. You have to flip the small Mickey back into the head for this. The ears fold in to fit. Then the legs swing up to meet the back of the trailer, feet fold down and twist in to move the wheels into the right position; the legs click neatly into place, and the trailer doors can be closed. 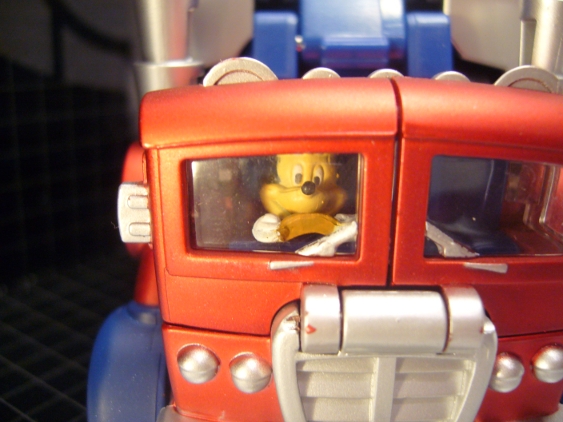 The arms are simply pushed toward the torso against the springs in the armpits. Pegs in the hands hold the arms into the hips. What only a moment ago was Mickey’s rear end now forms the cab. The grill and lights are on a hinge just below the windows. As the grill and lights are pressed it into place, finishing the cab, the small orange-clad Mickey Mouse pops down into the drivers seat - in a ball cap, no less. Articulation The arms rotate back and forth at the shoulder, and can move very slightly up and down, however they hang loosely, held off the torso by spring-loaded tabs in the armpits. Optimickey's neck does have a joint, but it is of little use as it is attached to the trailer at the back of the neck, rendering its range of motion substantially restricted. There are no knee joints, and while the legs can move independently of one another at the waist, this movement is very limited and the mobility exists mostly just for the transformation. He’s kinda meant to just stand there and look good.

The key to understanding this figure is to acknowledge that this is a collectible. It is not an action figure and it’s sure as slag not a toy. No one is really meant to play with it. It’s meant to stand on a shelf and be interesting, and that’s what it does. It’s like a commemorative plate celebrating the 25th anniversary of the Transformers. I think a more cartoony paint job might have been better than the metallic finish, and the ears… sparkle a little, which is odd.

Over all, this is a well-made figure, and in my opinion a must for any Optimus Prime enthusiast, although probably not fare for the average collector. 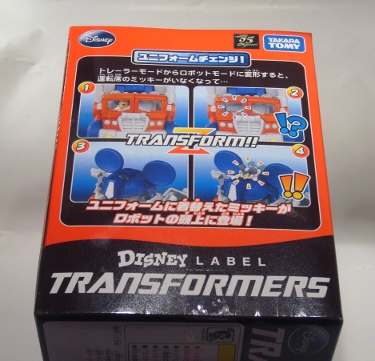