It's been 8yrs since the beginning of the Unicron Trilogy. It all kicked off with Armada, with it's gimmick of using minicons to power up the Transformers. One such character was Hot Shot. Although one of the lead characters in the series, his figure was less than stellar. The brick-like nature of the figure did the character injustice. Universe makes an attempt to give some vindication to Hot Shot by redoing him for the 25th Anniversary line.

Impatient, impulsive, and actually sometimes kind of annoying, Hot Shot is young, but full of potential. Optimus Prime sees in him the qualities of a great leader, and has taken it upon himself to mentor the young warrior in the ways of command. His Mini-Con partner Jolt tries his best to keep his erratic behavior under control, but Hot Shot is quite skilled in ignoring the voice or reason. he's also obsessed with something called JaAm, which most Autobots think is some obscure fuel source, but no one knows for sure 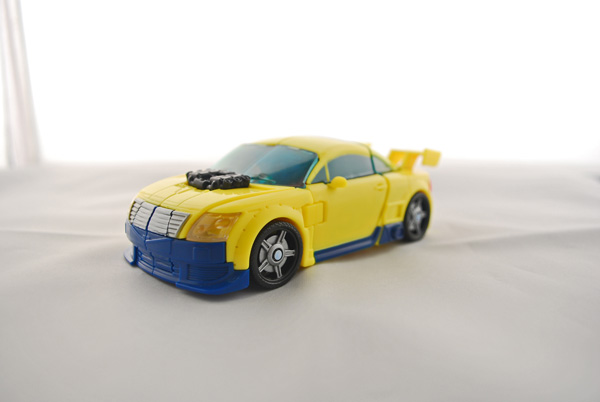 Hot Shot is dressed up in his original Armada car design for Universe. Although smaller in dimensions than the Armada counterpart, it still retains much of the original look. The paint is still bright yellow, with some blue for ground effects and on the roof. The grille is silver, with clear translucent headlights. The windshield and rear glass are done in blue translucent glass, but the side windows are painted in. Personally, it should be an all or nothing treatment with the glass as the mix of translucent plastic and painted apps looks tacky. 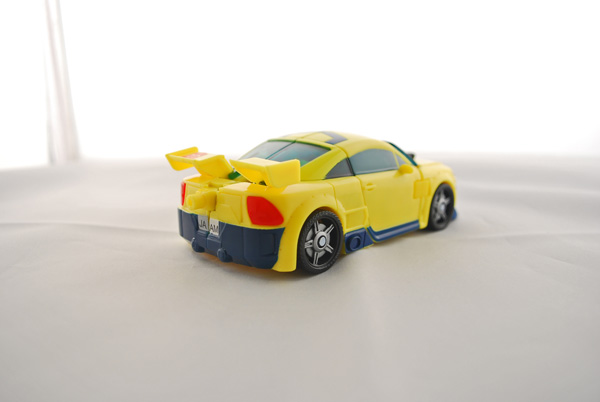 There is an Autobot insignia on the left rear spoiler and a big Minicon port on the rear end. His license plate reads JAAM, in reference to a fan written parody of the Armada figure's packed in comic. Several things are missing versus the Armada Version. No longer does he have the saws hidden in his front bumper or the removable engine block that becomes his weapon. 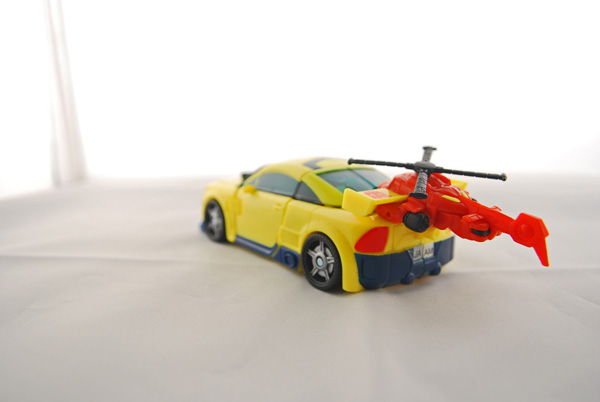 You'll notice that the rear glass is notched a bit. This allows for Jolt to mount up to his rear end, although the end result is pure failure versus the original Power Link result. This is because Jolt's main rotor can't fold down. Let's take a minute to look at Jolt. 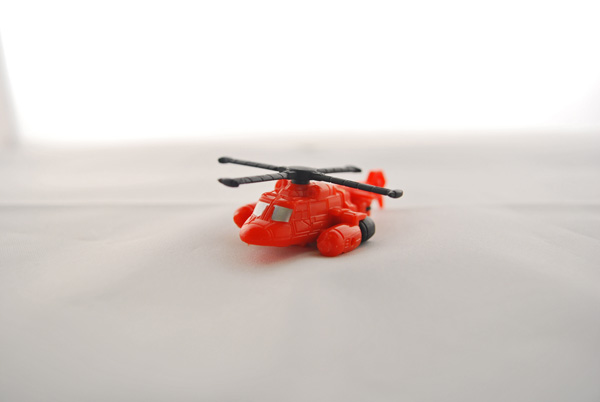 Jolt is the Minicon paired with Hot Shot. His alt mode is a red helicopter. Although a bit leaner, he is a good representation of the Armada version. His main rotor spins freely and his rear rotor is nicely detailed. To transform Jolt, pull the underbelly out, spread the halves out to form his legs, and flip the legs so they are parallel to the tail assembly. Fold the nose of the chopper over the tail assembly to wrap it up. 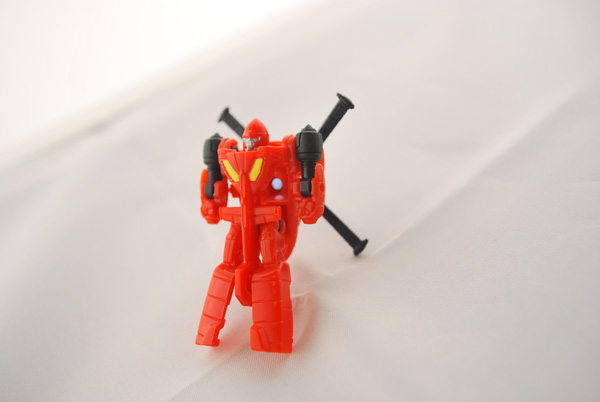 Jolt shows a bit more detail in robot mode versus his Armada counterpart. Leg articulation is limited due to both legs being on a common hinge with no knees. However, there is decent shoulder and elbow articulation. Overall, your standard Legend sized figure with slightly above average detail.

Hot Shot starts out transforming just as he did in Armada. Open the doors and fold them flat against the front wheels. Pull the rear fenders away and back from the windshield. Split the remaining sides apart and fold the back carefully. You're going to get kibble interference. Spread the front end apart to form the legs. The next step requires both hands. As you take the belly of the car and flip it forward, move the legs so you can complete that process while keeping the arms in check.

Press against the center of the grill to dislodge his feet and fold them out. Rotate the legs so the pale blue is up front. Fold the windshield behind his legs. If you haven't already, take the roof panels on his forearms and fold them back. Rotate the head forward and raise the visor to make the official transformation complete. If you want to remove the rear fenders, which is recommended, carefully pull the assembly at the rear wheel and wiggle loose. This helps with the kibble factor tremendously. 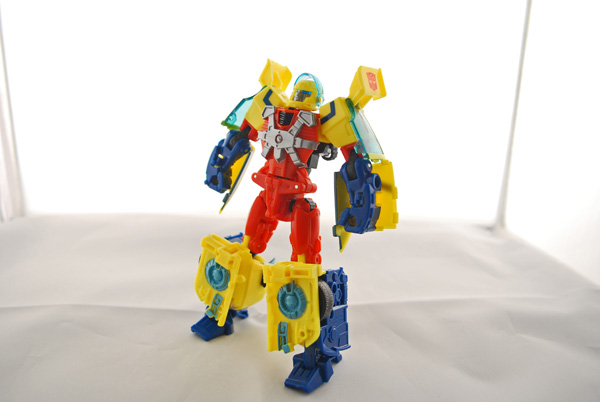 The good news here is that they succeeded in streamlining Hot Shot's robot mode quite a bit. He no longer looks chunky. All the colors are there, including the yellow, red and dark blue. Curiously, the shins are in pale blue, which throws the look. You'll also note the silver "strap" chest. Note there are no pegs to mount his motor block to. The head mold is done very well and features blue piping. 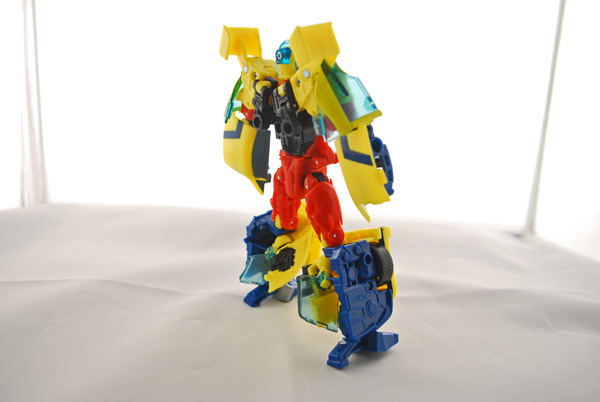 Now for the bad news. The back kibble is horrendous. There is no right way to position it without it being in the way. Hence, why it's suggested to remove it entirely. Also, the shoulders are on an unusual joint so they look off kilter. Finally, just like the vehicle mode, the Power Link feature is totally lost. There is no rear axle bazooka, although he can utilize his visor, which is done in translucent blue. 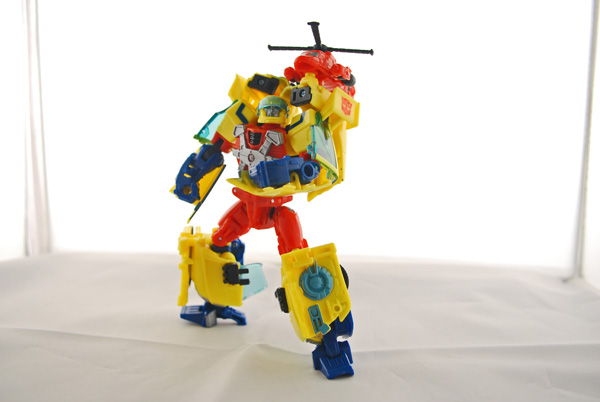 
With the back kibble on, upper body posing is frustrating. It mars an otherwise well jointed figure, if you discount the permanent "macho man" look of the shoulders.

: A nice update, but still not much to love about Hot Shot.
Size Class: Deluxe
MSRP: $11