This week’s Transformers Animated episode “Three’s A Crowd” introduces a new character into the fold, but at the same time, still feels like a bit of a filler episode. I know the ending points at some things to come further down the lines in this season, but it was a little underwhelming.

Two storylines take place in this episode – Bulkhead trying to fix the Space Bridge (it starts out that way, at least) and Optimus Prime and the rest of the Autobots tracking down the Decepticons – which manage to converge later. For the sake of the recap, I’ll talk about them separately until they do so.

Professor Sumdac and Bulkhead are in the lab trying to fix the Space Bridge. While waiting around, Bulkhead leans on a forklift that Sumdac is sitting inside and the floor gives way. Bulkhead manages to save Sumdac, but the Head Master unit, and an AllSpark fragment fall down several stories. Sumdac decides to take a rest after the episode and forces Bulkhead to go find Mix and Scrapper to help lift out the parts.

While the Constructicons assist with the extraction, it turns out that the three pieces have merged and become a little, grouchy Transformer, revealed as Dirt Boss. He’s complaining about working all of his life and he’s tired about it and that he’s the boss now. 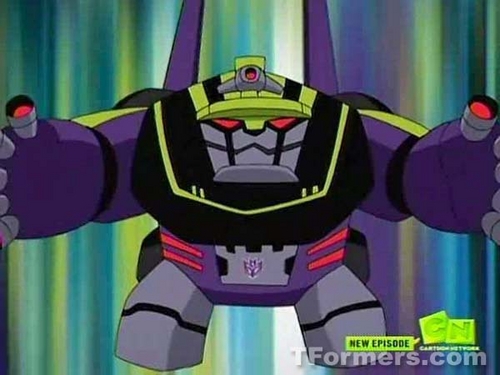 Scrapper mumbles to Bulkhead, which upsets Dirt Boss and he shoots something at his head that gives Scrapper a huge headache.

Bulkhead tries to page Optimus Prime, who is having issues of his own, but more on that a bit later.

The Constructicons and Bulkhead have come around and accept that Dirt Boss is the, uh, Boss. But Sumdac returns to see what all of the racket is about, only to see the Constructicons, which he instructs Bulkhead to throw out. To protect his cover, Bulkhead yells at Sumdac and tells him to get back to work, while trying to hint at the ploy.

Sumdac doesn’t get it, and runs for his life, proclaiming that Bulkhead is worse than working for Megatron.

Dirt Boss proclaims that they must protect the oil on the planet and they set out to do so.

Their first stop is taking out an oil tanker. An oil tanker drives along the highway and sees Scrapper and Mix blocking the middle of the road. The driver quickly stops and yells at them, but the two of them, pick up the truck and dump the driver out. 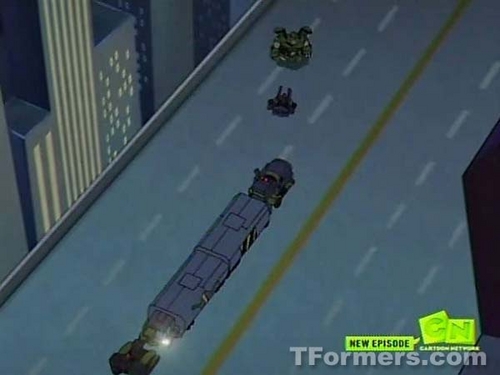 Bulkhead attempts to stop them, but Mix shoots a pile of cement at his feet, effectively planting him to the road. The two drive away with the tanker, and Dirt Boss picks up the driver, telling him there’s a new boss in town.

Newspapers report that oil has dried up in the City of Detroit as the three Constructicons terrorize the city and steal all of the oil.

Captain Fanzone questions Bulkhead, asking him if he knows these bots, but Bulkhead vouches for them and says that they’re good robots, just misprogrammed.

At the Construction base, which is just an abandoned warehouse somewhere, Mix and Scrapper are drinking the oil, which Dirt Boss quickly puts to a stop. He explains that they cannot keep drinking the oil that they are planning to use to hold the city for ransom.

Dirt Boss reveals that the next stage of their plan is to destroy the city’s oil refinery so the town will have no choice but to buy the oil from the Constructicons.

While they reveal the plan, Sumdac returns to Bulkhead with the Space Bridge component complete. Bulkhead explains to him that he’s not really mean and was just trying to protect his cover. He tells Sumdac to go hide just as the Constructicons show up.

Bulkhead tries to talk them out of it, but Mix attacks him. Bulkhead dodges and counters, but unfortunately, his wrecking ball gets stuck in Mix’s arm and Bulkhead is easily taken out. They start for the refinery, dragging Bulkhead along with them.

As they head to their destination, Bulkhead keeps trying to stop them from carrying out the plan and Dirt Boss shoots his mind control device into Mix and tells him to take him out. During the fight of Bulkhead and Mix, who are still attached, Bulkhead activates his comm-link with the remaining Autobots. 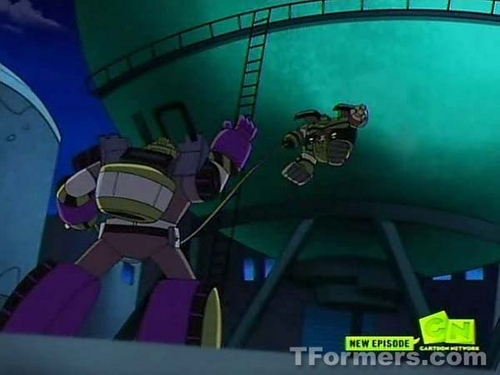 After a bit of fighting, it becomes clear the two are even matched, so Dirt Boss takes the mind control device out of Mix and implants it into Bulkhead.

While Bulkhead tries to page Optimus Prime, who along with Prowl, Bumblebee, and Ratchet, is currently on a mission tracking Decepticons, thanks to Sumdac disabling the signal dampener. During their tracking mission of Lugnut, he swings back and attacks them.

Through some teamwork, the Autobots are able to put the stasis cuffs on him. Unfortunately, he lands into a giant crater in the ground and the Autobots are having issues dragging him back out. 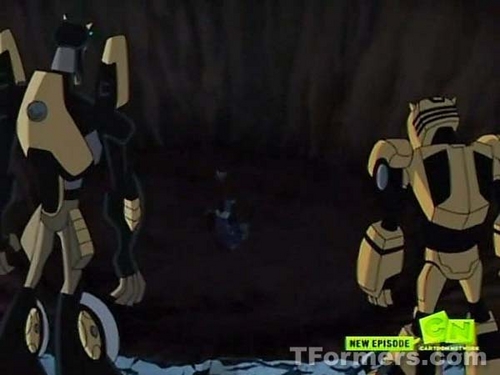 Despite their efforts, Lugnut stays in the crater. As they hear Bulkhead struggling with an opponent, Prime decides to dump him back in there and move out to rescue Bulkhead.

During the attached struggles, an oil tank is pierced and all of the oil comes pouring out, which Dirt Boss commands Bulkhead to light on fire to begin of the process of destroying the refinery. Scrapper and Dirt Boss hide behind something while Mix, still attached to Bulkhead, lays helpless on the oil, pleading for Scrapper to help him.

The Autobots arrive on scene and find Professor Sumdac still there, hugging the Space Bridge device. Sumdac tells them of the situation, but are attacked by the mind-controlled Bulkhead. 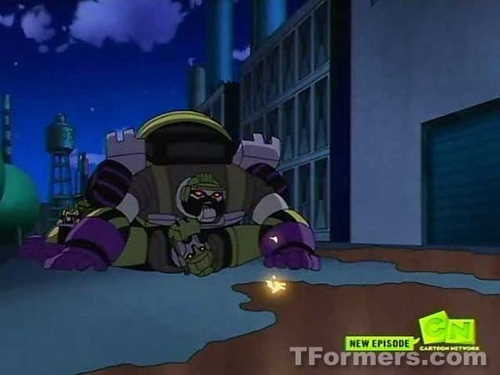 They are able to take the mind control device out of Bulkhead, and then Bulkhead is able to detach himself from Mix by throwing him into Scrapper, which leads to the two of them being stuck together. The spark of the two Decepticons causes a spark, which lights the oil on fire.

Dirt Boss decides to hop onto Scrapper and manually controls the two Constructicons onto the top of the oil tank for some inexplicable reason.

The Autobots battle the fire, but are unable to contain it. Sumdac suggests that they use the Space Bridge device to transport the oil tank somewhere else, which Bulkhead successfully does. 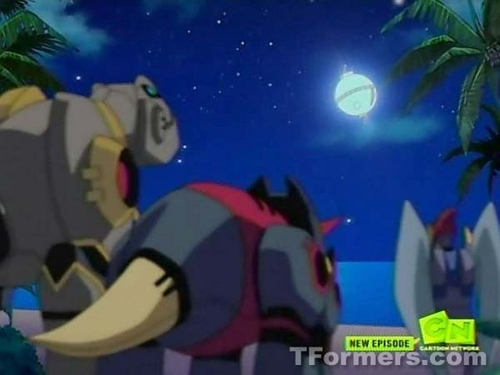 The oil tank, along with the three Constructicons, lands into the ocean right off Dinobot Island.

With one crisis averted, the Autobots head back to the crater, where they left Lugnut, only to find him gone. He is too far gone for his signal to be detected by the Autobots. 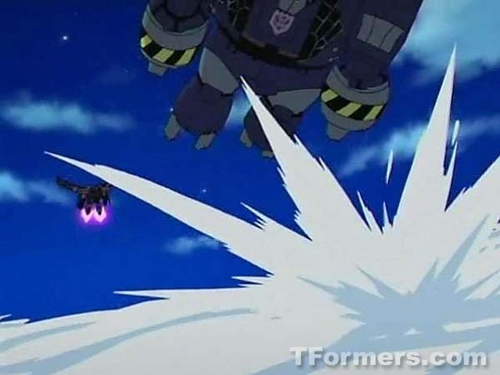 In the sky, we see Lugnut and one of the Starscream personalities flying together. Lugnut asks him not to mention the episode to Megatron, which the Starscream agrees to. With the trademark smirk to boot.

Like I said in the beginning of the recap, this felt like a filler episode, despite the fact that Dirt Boss was introduced somewhere in the fray.

I’m not saying it’s a bad thing, really. I enjoyed the episode, as I have enjoyed (most of) the others, with its humor and action to boot. However, afterwards, I felt underwhelmed.

Dirt Boss is quite the Mafioso-type guy and has quite the “facial hair” to boot. He also is quite a gymnast. He does more flips than Prowl!

While I know it was just something to fill up the rest of the time of the story without Bulkhead and the Constructicons, the Autobots trying to pull out Lugnut from the crater was quite funny.

Although I have to wonder about something. There was a whole montage of the Constructicons pillaging the oil in the city. The city's newspapers were reporting the affects of their actions were having on the city. However, after that, it cuts to Optimus Prime and the other still attempting to get Lugnut out of the crater.

Does that mean that they were trying to pull him out for days? Or do newspapers in "Detroit" run about 5 times a day?

The other question that I had came at the end of the episode. With the oil tank landing near Dinobot Island, will the Dinobots and the Constructicons join up to be the ultimate team? After all, Dirt Boss is a born leader. With the screw in people’s brains and stuff.

Join us next week when my fellow Animated reviewer Blitz-Wing dishes out his thoughts on “Where is Thy Sting?”