Everyone pretty much knew (or at least hoped) that with the release of Universe Ironhide, Ratchet wouldn't be far behind. Sure enough, the 25th Anniversary line has bestowed upon us the Autobot medic. Taking more from his comic personality than his anime presence, Ratchet is a party bot turned sour by the vigils of war.

Back on Cybertron, Autobot Ratchet was the best mechanic and machinist around. The only thing that kept him from true greatness was his constant partying. Years of war and a series of tragic encounters with Megatron have tempered his good nature, leaving him with a melancholy edge and a sour bedside manner. he's still the finest medic the Autobots have at their disposal, but these days he's more distracted by his bad memories than his late nights. 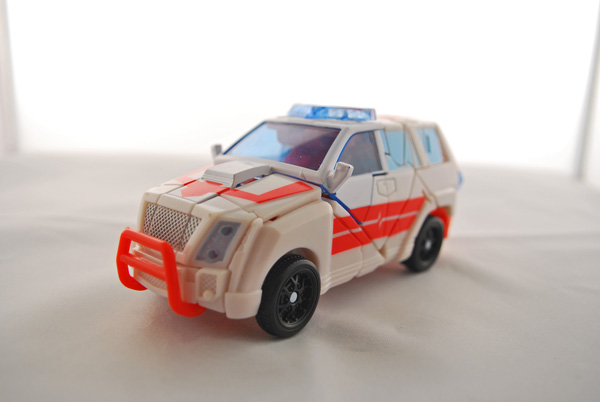 Ratchet shares his alt mode with Ironhide, and for the most part the mold is the same. The color scheme is white, with a red striping in various parts of the vehicle. There is a white pulse line along the striping on each side. The brushbar in front is also in red. His license plate reads H3L PU2 (Help you too). The lone add-on is a translucent blue lightbar on the roof. You will find red and blue stickers on top of the lightbar. 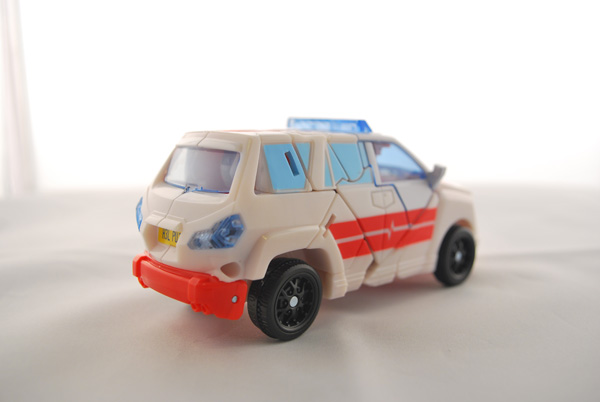 Since the mold is mostly unchanged, the shortcomings of the mold are also the same. The jigsaw-like look of the vehicle mode, particularly on the sides, take away from what could have been a great mode. Again, the windows really throw off the looks. While it's understandable that they have to use painted apps for the sides, they could have at least foregone the baby blue or at least more closely matched the windshield and rear glass. 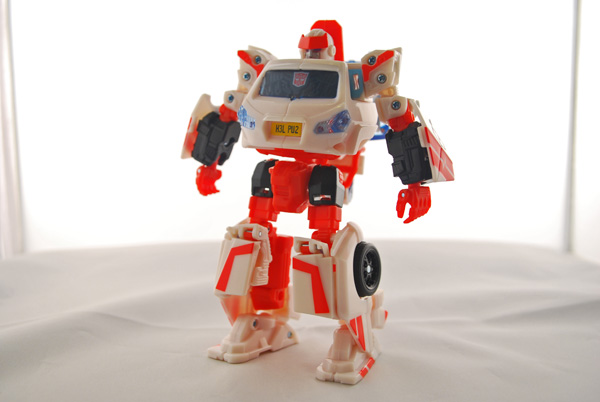 Again, there are mostly no changes is mold between Ironhide and Ratchet. The only difference is the head mold, which has the traditional red forehead visor. There is also blue piping for the eyes, but you have to hit the light just right to get the effect. Ratchet's medical dispenser (are you kidding me?) is also a combat knife depending on which side you insert it onto his arm. 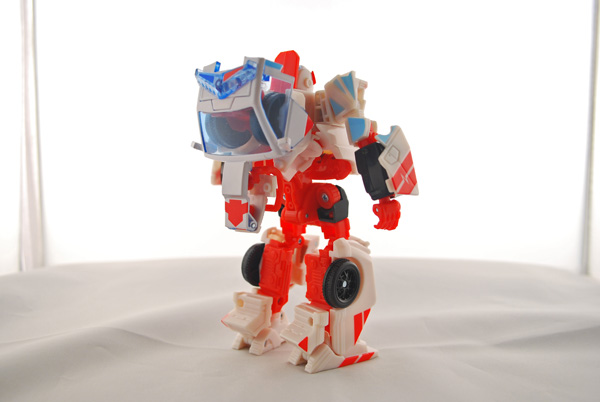 You think that they could have at least fixed the head mounting for Ratchet. Alas, the head still looks like it's not fully popped out of the chest. There are fan-instructed fixes for this, but you'd think Hasbro could have fixed it on it's own. 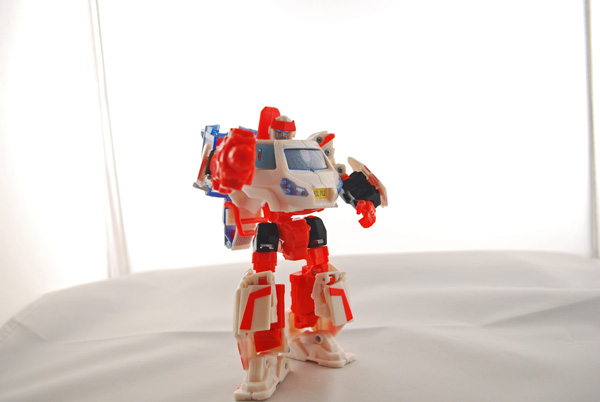 
Joints are set up well for the most part, but the arms can't fold flat against the sides.

:Nice update, but the many seams take away from the overall look.
Robot Mode -

:Still has a restricted head and cumbersome backpack Overall -

: Hasbro had a chance to fix some small but annoying issues with Ratchet, but they didn't. For shame.
Size Class: Deluxe
MSRP: $11