When the Allspark shards went flying, Starscream wasn't the only one to benefit. The Autobots (eventually) picked up another ally in the form of Wreck Gar. Although only featured in one episode (so far), he is now honored with a figure release.

"Anything I can do to help?"

Wreck-Gar means well. All he really wants to do is help folks in need. Unfortunately, he's a terrible judge of character, and happily helps anyone who asks without thinking about what he's doing. He has accidentally robbed a few banks, and blasted an Autobot here and there. his spark is in the right place anyway. Now that he's clear on the difference between the Autobots and the Decepticons, misunderstandings liek that should happen less often. 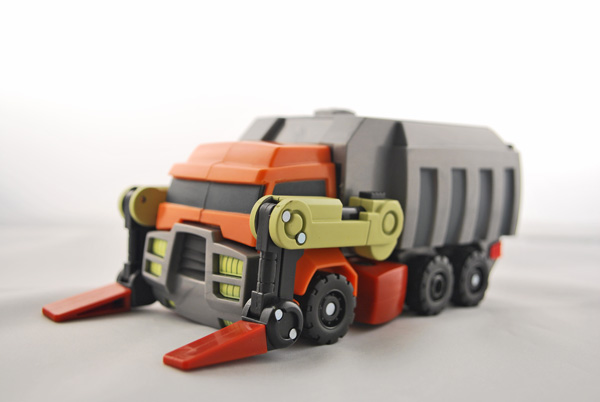 Wreck Gar adds something to the Transformers universe that hasn't been done before... a garbage truck. The cab is colored in orange, with the refuse bin done in gray. There is also some rust red on the lift forks and fuel tanks. The headlights are painted in yellow. 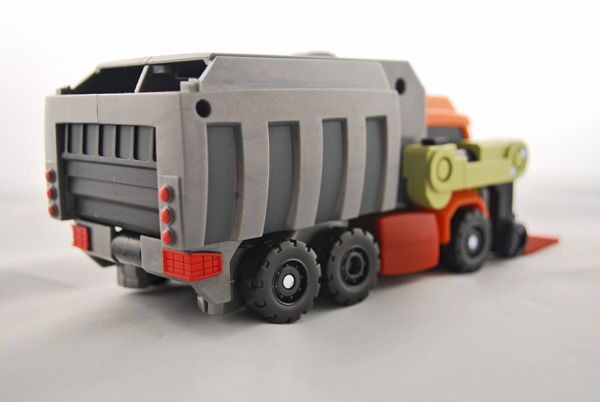 There are a lot of little details on this figure. For instance, look close enough and the grille looks bent up a bit. All 6 wheels roll freely. Although not a uniform movement, both forks can lift up 90 degrees. There is also a small lever on the back end which will push each fork out and up in a spring loaded action. The lever on the bin retracts Wreck Gar's robot mode weapons. Overall, a very attractive setup.

For a Voyager, he has an extremely simple transformation. Grabbing the grille, pull it apart from the cab. The entire cab and refuse bin will flip back. Fold both front wheels into the cab. Pulls the legs forward and flip out both ends of the feet. Pull both arms out in a wingspan. Rotate the shoulders forward, then fold the arms down. Flip the head forward. Pull the bin assembly so the gray bracket on his waist is flush. Lift up on the black bracket until it snaps in place with the gray bracket. Fold the cab into the bin, then fold the bin so it's flat on his back. 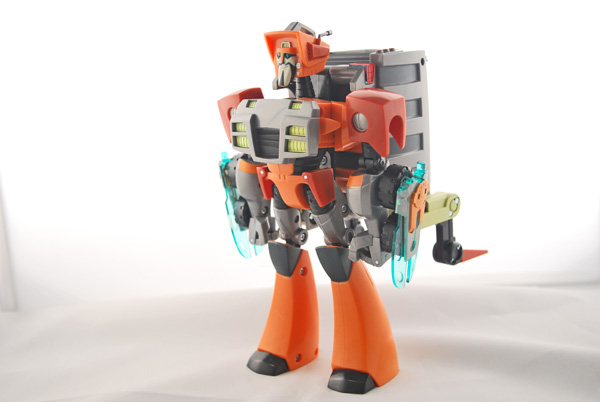 Wreck Gar has alot of his G1 Junkion coloration in his robot mode. The head in particular is a treat, as it's shaped like a portable TV set; complete with the carrying handle, knobs on the left side of his face and the antenna. The antenna is rubber. There is a slit on the back of his head that allows for blue piping for the eyes. 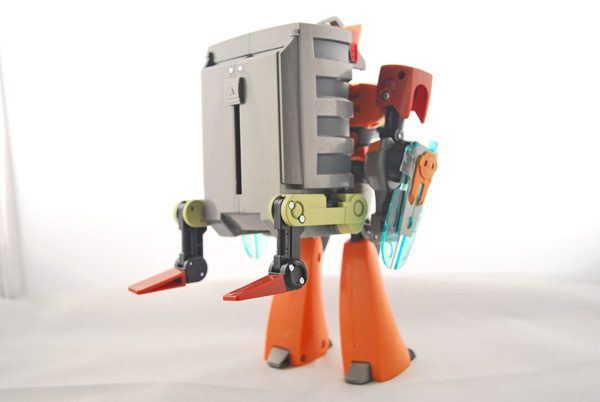 Activating the aforementioned lever on the bin will dispense both of his weapons. They are similar to Ratchet's magnet claws. Each one plugs into the wheel closest to the elbow. Or, if you choose, you can link them together and mount it on one arm. As with most Transformers with similar design, Wreck Gar's weakness is the backpack. It makes for imbalance in certain positions. There is also no way to fold the forks so that they don't protrude from the back. 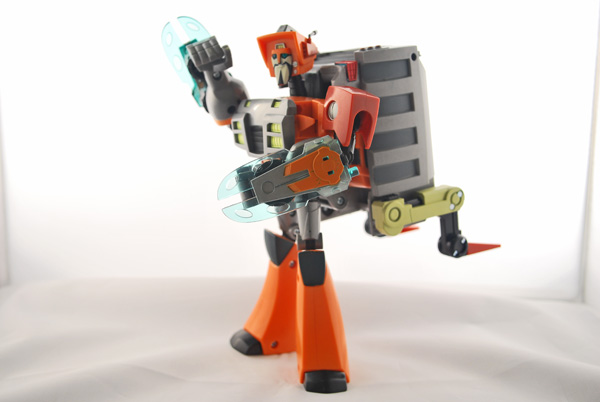 
The joints are set up well, but the backpack limits movement and plays havoc with balance. Doesn't help that the joints on the legs were loose.

: An excellent figure if not for the balance issues.
Size Class:Voyager
MSRP: $22