Following yesterday's release from Hasbro, Nuclear Blast has issued the announcement of their partnership along with ESP and Kirk Hammet in celebration of Transformers turning 30 by giving away two guitars which can then be autographed by Kirk Hammet. There will also be a CD sampler from Nuclear Blast given away while supplies last, all taking place at the Hasbro booth at SDCC this weekend. Keep reading for the full release.

HASBRO TEAMS UP WITH NUCLEAR BLAST, ESP, AND KIRK HAMMETT

Hasbro is excited to continue the celebration of three decades of the TRANSFORMERS brand at this year’s Comic-Con International in San Diego, California with fans from around the world!

Teaming up with Nuclear Blast, ESP Guitars, and legendary heavy metal guitarist Kirk Hammett of METALLICA, the TRANSFORMERS brand has delivered the hardest and most rocking special edition item TRANSFORMERS could imagine: an ESP LTD M-10 Electric Guitar fully decked out with unique “TILL ALL ARE ONE” graphics to honor the TRANSFORMERS 30th Anniversary.

“Hasbro and the Transformers brand is excited to celebrate the 30th Anniversary of Transformers with this amazing musical collaboration with our Nuclear Blast partners,” shares Jerry Jivoin, Global Brand Marketing Director at Hasbro, Inc. “Music has always been such a huge part of the brand and we are excited to celebrate our 30th birthday with Nuclear Blast and their tremendous roster of bands.”

Nuclear Blast Label Manager Gerardo Martinez shares the enthusiasm: “I'm beyond excited and honored to be able to work alongside my great friends at Hasbro and one of their legendary core brands: The Transformers! The prospect of bringing this iconic brand together with metal music has been in the works for quite some time… and now the wait is over! This is simply an amazing dream come true. Let's celebrate 30 years of Transformers along with this great crossover opportunity and plan for many more to come!”

Two epically limited TRANSFORMERS guitars are being raffled off at this year’s Comic-Con International.

Fans in attendance are encouraged to visit the Nuclear Blast booth (#503) starting Wednesday, July 23rd at 5 p.m. (Preview Night) to enter for a chance to take one of these amazing guitars home. Winners will be chosen at random on Saturday, July 26th at the Hasbro booth (#3213) at 1:30 p.m. METALLICA’s Kirk Hammett will be in attendance to autograph the guitars and take photos with the winners.

To pay additional homage to TRANSFORMERS and the huge role music has played in the brand’s history, Nuclear Blast is giving away a limited edition CD sampler featuring 17 tracks from their impressive roster of Billboard-charting artists. This sampler - which features the TRANSFORMERS “TILL ALL ARE ONE” artwork - can be picked up at Hasbro’s booth (#3213) (Thursday, 1 – 2 p.m.; Saturday, 1:30 – 2:30 p.m. & 4:30 – 5:30 p.m.) and throughout the convention’s duration at the Nuclear Blast booth (#503) while supplies last.

For more information about the label and its artists, visit www.nuclearblast.com. 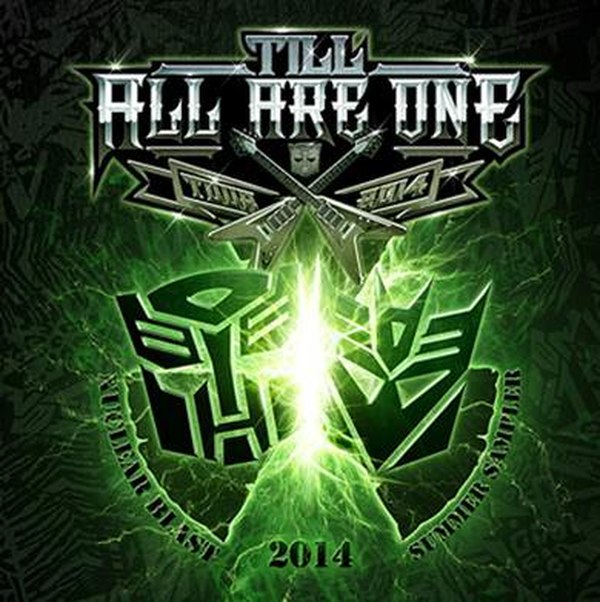 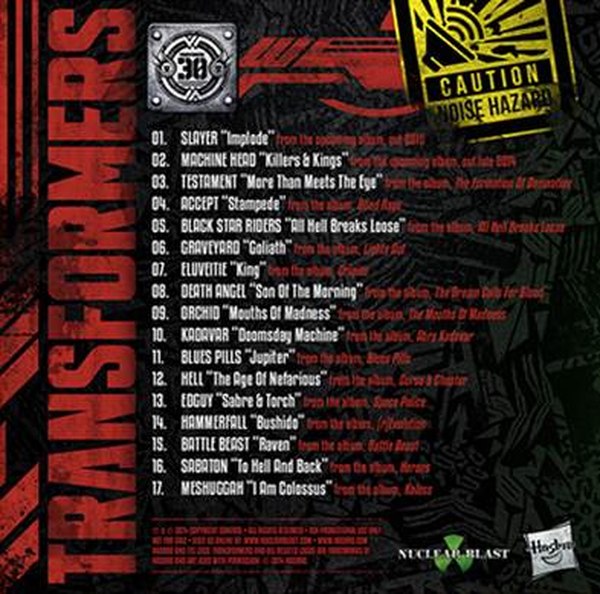