TakaraTomy Legends And Movie Releases For February And March 2018

Loopaza on Facebook has shared information about TakaraTomy releases during February and March of 2018, including a new batch of Movie The Best figures, a reissue of Masterpiece Bumblebee (the G1 variety, that is), and the next batch of Legends Series after January's assortment of Overlord, Blitzwing, and Autobot Clones - and there's some unexpected items in there! Keep reading to see what's on the way that you need to start saving up for now!

Movie The Best in February will be featuring

In March the movie series will get the following

Legends Series only has entries for February:

And additionally MP-21 Bumblebee is being reissued in February.

Jazz, Bonecrusher, Lockdown, and War Hammer Bumblebee are all priced consistent with Deluxes, which is a good sign that this Lockdown is the Age of Extinction version, not the post-ROTF toy that would almost certainly need a higher pricepoint today. Megatron is at the typical Leader price of ¥8000, as is Nemesis Prime. Hound is the sole Voyager with a slightly higher than normal price of ¥5000 which probably indicates extra accessories. Meanwhile, Optimus and Jetfire are the killers, with Jetfire at ¥10,000, and Optimus at ¥15,000!

On the Legends side, Windblade is priced the same as Hot Rod, Kup, etc, owing to the inclusion of a Targetmaster. The Targetmaster in question is not named. One possibility is Fracas, to complete the Scourge sold prior to the Targetmasters being an option, but we can't say for sure at this point. G2 Megatron is itself a surprise, as it was not expected to see the Megatron parts on the shared Blitzwing mold be used in Japan, especially as a normal retail product. Whether this will be the green and purple deco or the later purple and black is up in the air, though the latter is what was used several years ago for their release of the 2006 Classics tank Megatron mold. Also of note is its price at ¥5500, the same price as Blitzwing which points to the inclusion of an extra such as a Titan Master vehicle, and there are a few still unaccounted for in the Japanese releases, including those belonging to Sawback, Fangry, and Ptero - nor can we rule out the reuse of a mold that's already been used. It should be interesting when the relevant hobby magazine scans hit, in any case! 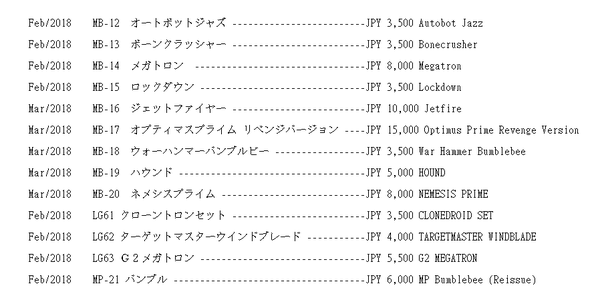