The Uncertain Future of LG-EX Grand Maximus - And What We've Learned From Its Pretender Shell!

We brought you the first word last night that the LG-EX Grand Maximus exclusive would feature a bonus Titan Master Pretender shell based on Power of The Primes tooling if at least 3000 preorders were received. But there was yet more hidden in the promotional copy that we've found out since then - one of which calls the toy itself in to question! Keep reading to find out more!

Grand Maximus is a major surprise, because despite some obvious possibilities in the past, no Titan Class release has seen a significant redeco, instead essentially having just small variations used as event exclusives. It didn't seem like either Hasbro or TakaraTomy wanted to take a risk on releasing a redeco of something that big and expensive. And they still don't.

Not obvious to those of us unable to easily read Japanese, an extra provision was present in one of the banner graphics for Grand Maximus. In addition to requiring 3000 preorders for the Pretender shell component, it turns out that if at least 2000 preorders are not received, Grand Maximus will not be released at all. TakaraTomy is taking out insurance, after a fashion, to make sure that there's both an adequate number to do a production run (with 2000 units presumably being above some threshold that makes the production more cost effective) and that they won't be left with lots of unsold large toys taking up warehouse space. With a preorder window of just a short few weeks, it seems uncertain whether they will meet either of the set goals. The Japanese fans we've seen commenting as these factors became known seemed a little skeptical.

This has a secondary effect as well: It could be a sign of no Hasbro Asia distribution of this exclusive. There's certainly the possibility that if the preorder goal is met, then a given number of additional units might be added to the overall production order so there's some to distribute in the Asia markets, but right now it seems like if Grand Maximus does happen, it may be necessary to use a middleman to obtain it outside Japan, which means the import cost will likely jump significantly.

Now, as for the Pretender shell. It was obvious from the first images that TakaraTomy was repurposing a Decoy Suit from Power of The Primes to imitate this function from the original Grand Max. But it took a while before we realized they were previewing for us a suit we hadn't quite seen yet. While it shares some parts with the Cloudburst suit that is part of the Micronus Prime Master set, the front body half is a new piece with details that line up with Waverider. This proves that tooling at least exists, even if there is no current indication of a Power of The Primes release even through various leaks. But along with the known-to-exist Metalhawk, Cloudburst, and Landmine, there's toys available for the whole Autobot Pretender cast of Masterforce. It would be surprising to not see that - and their Decepticon opposites - leveraged by TakaraTomy during the next year or so. 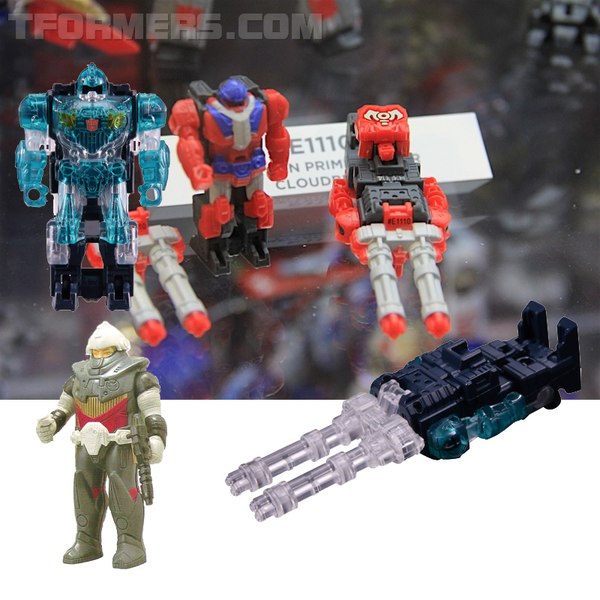