Our second Titans Return collector card image to be leaked today is not as life changing as a Headmaster Arcee might be for some, but it is interesting in its own right. That same Weibo source put up an image of a collector card for Titan Master Ultra Magnus. Why is this interesting? For one thing, because Titan Master pricepoint items don't have collector cards! And neither do Titans Return box sets, for which Ultra Magnus is believed to have been intended at one time. Keep reading to see the image and for more information!

The Trypticon cereal box poster which RAC mined for information this week included reference to Ultra Magnus as a Titan Master, with the power of Ultimate Intelligence Boost. This specific style of Titan Master ability follows suit with the Titans Return multi packs, showing this would have been the special Titan Master included with the "Intelligence" set, also meaning it would feature diecast metal for the Ultra Magnus face if it followed the style of Rodimus Prime and Thunderwing. But as noted, the boxsets don't get collector cards, instead coming with a mini-poster that features everyone in the set. So what's the deal with this?

We confirmed with Hasbro in our SDCC Q&A on Thursday that only the two Titans Return sets, Chaos on Velocitron and Siege on Cybertron would be released this year. The remaining Clones, Cloudraker and Wingspan, got spun off as a special exclusive to Walgreens, leaving the rest of the Intelligence and Fire(blast/power) sets' contents in limbo. Or maybe not. My speculation right now is that this as well as the Arcee from earlier today represent portions of at least one box set being redirected as some other kind of (probably exclusive) release. A Titan Master isn't much of an exclusive item by itself, which could perhaps indicate a bundle with Arcee. Here's why I think this might be the case.

Ultra Magnus's art shows the Titan Master body of Hyperfire - that's the one that comes with Blurr, for those not totally up to speed on their Titan Master names. And that's the important discovery. Why? Because Arcee is made from a Blurr body, but we're guessing it would have the Exosuit Titan Master that TakaraTomy is releasing with Legends Bumblebee and a Rebirth-style Cerebros face on its back. But there's still a Hyperfire body that's gang-molded with the Arcee. If Arcee and Ultra Magnus were originally planned for the same boxset together, it's a simple matter that the Hyperfire parts get redirected, and the new Titan Master is assigned on to Arcee as Daniel - or Leinad according to the cereal box poster. So, running with that idea, keeping these two paired together as a repurposed exclusive makes sense. But why would they even need to be moved to some other format of release?

Cutting new molds costs money. Quite a bit of money, in fact. And we believe Arcee to have a degree of unique parts in much the same way Nautica had hoverfans and most probably a brand new face sculpt. Likewise, the Ultra Magus face is not only its own new mold, but it's a mold that would be made for casting metal. The specifics of it aren't immediately important, but it's known that in general molds for one material can't just be used to press out another material. A tooling for a diecast part only works for casting metal, just like you can't cast metal in a mold designed for plastic. So there's a certain investment in designing new pieces for use in a box set, and if that box gets canceled after those molds are cut, that money still has to be recovered. And so the two toys that got that extra money put in will still get made, just as the second pair of Clones still got made. It was both to "finish the teams" and to get complete use out of the molds that had been made.

If I'm right about this, we won't suddenly see other pieces from the defunct Intelligence set, because if they follow the pattern of the first two, the Leader and Voyager toys in that set would have used only existing alternate parts - or maybe no alternate parts at all, depending on what had been planned. Production of those can be called off and little or nothing is lost. Also if this is correct, we may well see another Deluxe + Titan Master pair show up, featuring Scorponok and a Deluxe to be identified.

The potential venue for this theoretical exclusive is just as up in the air as the identity of the potential second Deluxe. HasCon could be one obvious answer. At the same time, the Clones went (or are going) to Walgreens, and are expected to be priced between $20-$25. A Deluxe and diecast-face Titan Master could conceivably fill that same pricepoint, making for a tidy series of three total exclusives, even if they don't all end up at the same retailer.

But just to be clear once again, this is speculative based on a couple of leaks over the course of the day, and all we have for certain is card art for a Titan Master Ultra Magnus that was probably originally designed for an Intelligence-themed boxset. 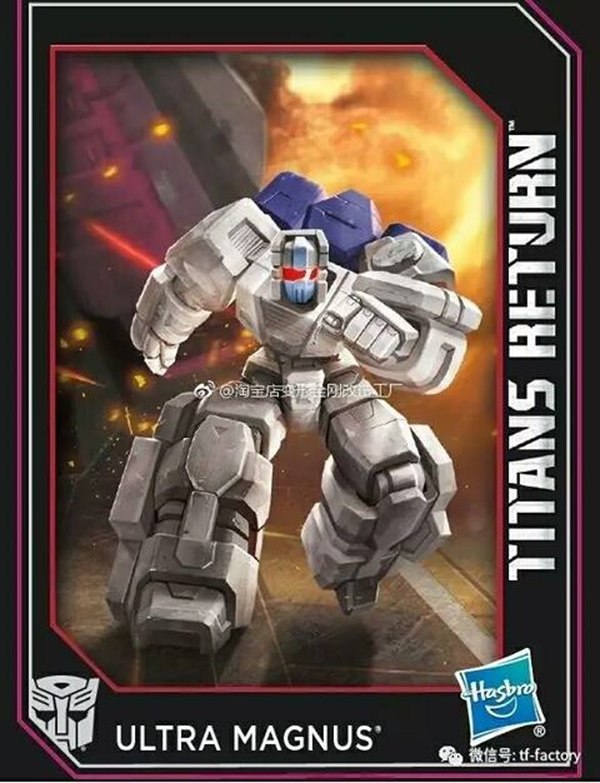