by Primus on January 16, 2009
Thanks again to Asian toy shop Red Mercury who has posted more solicitations Transformers: Revenge of the Fallen products. New listings offer word about the Bumblebee Plasma Cannon returning as well as more details on the new Voice Changing Helmets we reported on before.

According to the product listing, robo-translated from Japanese, the Optimus Prime helmet will feature "battle damage to the painting." Sounds like they'll be continuing with the battle worn look we've seen already on the EMPIRE Magazine cover. The Prime helmet is listed at 5229 JPY (~ $55 USD) and should be out May 30th for an MSRP around $40 USD. 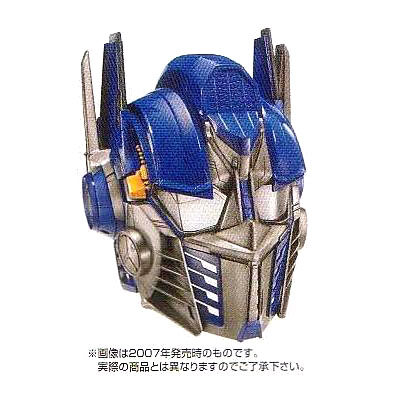 There's more than one helmet that meets the head this year. Now fans can roll out as Bumblebee too! According to the translated product listing, "Includes the ability to mix voice and other sounds of radio sound effects or transformation in Bumblebee helmet." Sounds pretty niffy! Definately, looking forward to checking that out. The Bumblebee voice changer is also listed at 5229 JPY (~ $55 USD) and should be out May 30th for an MSRP around $40 USD.

And just in case you all were worried as much as we were. The blasters will be BACK! There's a listing for Bumblebee's Bumblebee Plasma Cannon mentioning something about changing from cannon to robot hand. Most likely, it will be the same as the Bumblebee Allspark Blaster that appeared at the very end of the 2007 line.